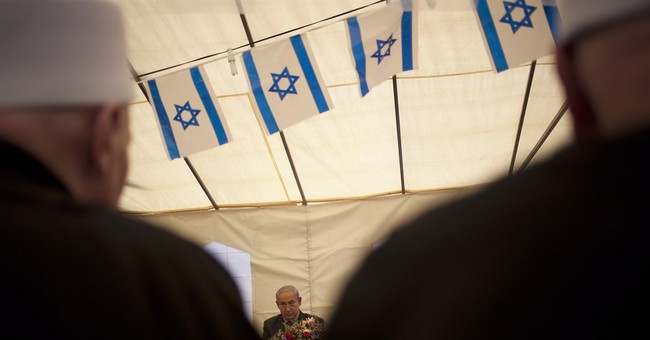 There are two main reasons that many leftists who are viscerally supportive of Israel have difficulty understanding and defending the Jewish state today. First, the storyline about Israel is deeply distorted.

For instance, this week, Freedom House released its annual report on press freedom around the world. Israel's ranking was reduced from "free" to "partly free."

Freedom House gave three reasons for downgrading Israel's status: the prosecution of Haaretz reporter Uri Blau for holding stolen top-secret documents; Channel 10's difficulties getting its broadcast license renewed; and the success of the Israel Hayom newspaper. As Jonathan Tobin at Commentary noted Wednesday, all of these reasons are fraudulent.

Uri Blau received thousands of top secret documents from Anat Kamm, who stole them from the office of OC Central Command at the end of her military service. The documents were not mere intelligence analyses. They were operational plans, unit information and other highly sensitive information.

Yet because Israel prosecuted Blau for these acts - which are felonies - Freedom House decided that Israel constrains press freedom.

Then there is Channel 10. Channel 10 is a poorly managed, unsuccessful company that has gone broke. It owes NIS 110 million which it cannot pay back, including NIS 60m to the state.

Due to its nonpayment of its debt to the state, the Knesset was set to vote down the renewal of its broadcast license - again, in accordance with the law. To protect themselves from market forces - Channel 10's failed management and staff used their bully pulpit to deflect attention away from their failure and incompetence. They accused the Knesset of trying to silence free speech. Channel 10's allies in the media and the political Left joined their anti-government bandwagon. The Knesset folded.

Channel 10's license was renewed. And its debt to taxpayers remains unpaid.

As for Israel Hayom, Freedom House alleged that the free paper's success in gaining market shares at the expense of other tabloids is part of a nefarious plot by Prime Minister Binyamin Netanyahu and his friend and Israel Hayom owner Sheldon Adelson to establish a quasi-state-controlled media. Israel Hayom is the first mass circulation Israeli newspaper not aligned with the political Left.

Freedom House's allegations against Adelson and Netanyahu and its championing of bankrupt Channel 10 are based on two guiding notions. First, non-leftist entities - the Knesset, Israel Hayom's editorial board - are inherently opposed to press freedom while the motives of leftist institutions like Haaretz and Channel 10 are as pure as the driven snow.

Second, they imply that media in Israel can only be free if not subjected to market forces or the rule of law.

Clearly both of these underlying assumptions are absurd. Yet they form the basis of Freedom House's damaging allegations against the government.

And that's the thing of it.

Over the past generation, we have been inundated by disinformation from an unlimited number of seemingly credible organizations whose aim is to discredit any development related to Israel that does not advance the positions of the Left. And due to the ubiquity of this disinformation, among wider and wider circles today the belief has taken hold that there is something fundamentally illegitimate about non-leftist Israelis and non-leftist supporters of Israel.

Since most Israelis are not leftist, and since the most outspoken supporters of Israel are not leftists, there is a widening belief - particularly among liberals - that Israelis, Israeli institutions and Israel's supporters are illegitimate.

This brings us to the second reason that it has become so difficult for Americans - and particularly liberal American Jews - who viscerally support Israel, to defend or even understand the Jewish state today.

There is a Western tendency, most pronounced on the anti-colonialist Left, to ignore the nature of the Islamic world generally and the Palestinians in particular, and concentrate their attention on Israel alone.

Dershowitz is rightly considered one of Israel's most outspoken defenders in the US. But like his fellow leftist ideologues, Dershowitz apparently does not think that it is important to focus on the nature of things in the Islamic world. Rather than notice current realities, he places his faith in his power to shape the future through his intellect and his willingness to compromise.

In an interview with New York Jewish Week following his participation at Sunday's Jerusalem Post's conference in New York, Dershowitz said he was astonished by both my remarks on Iran and the audience's response to my remarks.

He told the paper, "She said, 'Bombs away,' and they gave her a standing ovation."

One of the things that distinguish the Post's readers from most other news consumers is that our readers have educated themselves in the realities of Israel and the region and pay attention to those realities.

As a consequence, they are less affected by anti-Israel propaganda presented as human rights reports than the vast majority of news consumers in the US.

When I addressed the conference, I said I would limit my discussion of Iran to two words, "Bombs away." I said that because like the Post's readers, I base my analysis of Iran's nuclear weapons program on the nature of the Iranian regime.

The Iranian regime is a totalitarian regime. It has an uninterrupted record of torturing and massacring its citizens. It has threatened to annihilate Israel. It is the largest state sponsor of terrorism in the world.

As for reaching an agreement with the Iranian regime that would induce it to end its nuclear weapons program, this aspiration is similarly based on a denial of the nature of the regime. The first act of the regime was to reject the foundations of the international system. The Iranian takeover of the US Embassy in 1979 was not merely an act of war against America. It was a declaration of war against the international legal system. Since then, nothing the Iranian regime has done, including emerging as the largest state sponsor of terrorism in the world, has brought it closer to accepting the norms of behavior expected from a member of the family of nations. As a consequence, the notion that this regime would honor any nuclear agreement it may sign with the US or any other international party is ridiculous.

Since traditional forms of statecraft that do not involve the use of force are not viable options for statecraft involving Iran, the only viable option for preventing Iran - particularly at this late stage - from becoming a nuclear power is force. If Israel is serious when it says that a nuclear-armed Iran is an existential threat to the Jewish state then Israel must attack Iran's nuclear installations.

Because the Post's readers are informed about the nature of the Iranian regime, they appreciated the message I telegraphed in saying "Bombs away."

But Dershowitz was astonished.

Jewish Week asked Dershowitz about the Jerusalem Post conference because during a panel discussion he and I participated in about the Palestinian conflict with Israel, he angrily attacked the audience for laughing at his plan for renewing negotiations between Israel and the PLO and I angrily rebuked him for doing so.

Dershowitz told the audience that he had presented a plan to Palestinian Authority Chairman Mahmoud Abbas that involved Israel abrogating Jewish property rights in select areas of Judea and Samaria through a so-called settlement freeze. In exchange, the Palestinians would agree to suspend their efforts to delegitimize and criminalize Israel at the UN and the International Criminal Court.

In other words, Dershowitz put forth a plan - which he said Abbas responded positively to - that would require Israel to take a step not required by the agreements it already negotiated with the PLO. And in exchange, the Palestinians would temporarily suspend actions they are taking in material breach of the agreements they signed with Israel.

By advocating this "bargain," Dershowitz revealed that his conception of the Palestinians is based on willful blindness to their nature that equals his apparent blindness to the nature of the Iranian regime.

Last Saturday, Abbas gave a speech in which he said that Israel's commitment to the peace process will be measured by its willingness to release Palestinian terrorists from its jails. Last month, Abbas sent his representative to visit the families of jailed Palestinian mass murderers to express his solidarity with them and his admiration for their sons' crimes.

As Aaron Lerner from IMRA pointed out earlier this week, by insisting that all Palestinian terrorists be freed from Israeli prisons, Abbas is saying that there is nothing criminal or wrong about murdering or attempting to murder Israelis. This position alone discredits him as a peace partner.

Abbas's steadfast refusal to recognize Israel's right to exist, and his unceasing political warfare against Israel - in breach of signed agreements between Israel and the PLO - are just further proof that he is not a credible partner for peace.

Then there is the nature of the Palestinian people themselves. Unlike the Iranians, who desperately wish to overthrow their regime, according the results of a new Pew survey of the Arab world, Palestinians want more tyranny.

To the extent they oppose their regime, they do so because it is too open. Among other things, 87 percent of Palestinians say a wife must always obey her husband; 89% want to be ruled by Islamic law, and 62% support the death penalty for leaving Islam.

More Palestinians support terrorism against civilians than do citizens in any other Muslim society polled.

Dershowitz is rightly respected by Zionists across the political spectrum for his willingness to defend Israel against its detractors. And this makes his contemptuous treatment of an audience of its supporters at the conference more tragic than infuriating.

It is the tragedy of our times that basically decent liberals like Dershowitz dismiss as marginal those who base their assessments of Israel and the Middle East on reality, rather than on policy paradigms that are the stuff of negotiations textbooks at Harvard.