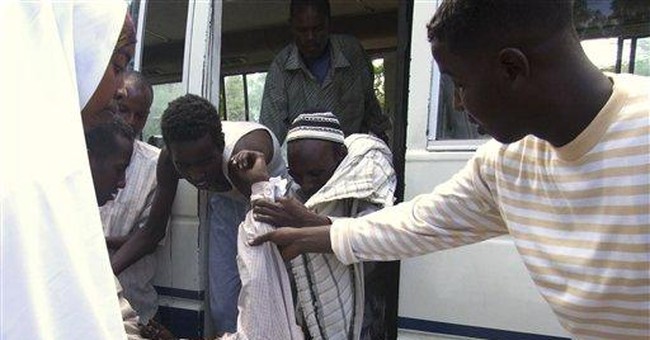 It isn't that they don't function. They function just fine. The problem is that through their regular functioning, they advance goals antithetical to those they were established to achieve. Instead of promoting global security, human rights, freedom and international peace, they facilitate war and aggression, human suffering and tyranny.

The UN General Assembly is now convening its 64th session. As they do every year, heads of state from across the globe are descending on the Big Apple to participate in the proceedings. As they convene, their agenda will demonstrate the failings of the UN. On the one hand, they will consider the UN Human Rights Council's latest broadside against Israel, which comes this week in the form of the UNHRC's 575-page report of its probe of Israel's behavior in its military campaign against the Hamas terror regime in Gaza this past December and January.

On the other hand, they will not give the slightest consideration to the fact that Iran is about to become a nuclear power, in contempt of its international obligations, and so is poised to become the gravest threat to international security in the past 25 years. Moreover, they will pay no attention to the fact that as it sprints toward the nuclear finishing line, the Iranian regime is engaged in a systematic and brutal repression of its political opponents, who since the stolen June 12 presidential election have been clamoring for freedom and democracy.

Both in its treatment of Israel and in its treatment of the Iranian regime, the UN demonstrates that its practices are an inversion of its stated mission. Despite its leaders' and supporters' repeated claims to the contrary, the UN stands shoulder to shoulder with tyrants and aggressors against democrats and democracies seeking to advance the causes of freedom, human rights and international security.

MANY ISRAELIS reacted angrily to the UNHRC's probe of Israel's prosecution of Operation Cast Lead, claiming that its final report presents Israel - a liberal democracy - as the moral equivalent of Hamas - an illegal terrorist organization dedicated to the commission of genocide against Israelis. Yet in their anger, they missed the real problem with the report.

As Prof. Avi Bell from Bar Ilan University law school notes, Richard Goldstone's report does not present Israel and Hamas as moral equivalents. Rather, it presents Israel as terrorist and Hamas as a legitimate government.

The Goldstone Report does not accept as fact that Hamas is a terrorist organization and that consequently, in accordance with binding UN Security Council resolutions, all UN member states are required to work to disband it and give no quarter to its members and supporters. Instead it treats Hamas - which is charter-bound to a policy of genocide against Jews and rose to power through a campaign of murder and intimidation - as the legitimate governing authority in Gaza, which, the report's authors irrationally claim, is simultaneously governed by an Israeli occupation four years after Israel withdrew its civilians and military forces from the area. In the UNHRC's parallel universe, Hamas is the only lawful actor in town. Israel - and the Palestinian Authority under Fatah - are guilty of illegally persecuting Hamas by arresting its members.

Hamas, which is working to establish a terrorist Islamic theocracy in Gaza, is not seen as systematically violating human rights and freedom. Israel is. Since it downplayed the 12,000 rockets, mortars and missiles that Hamas and its terror affiliates in Gaza have shelled southern Israel with during the eight years preceding Operation Cast Lead, the Goldstone Commission was unable to understand the overwhelming popularity the operation enjoyed among the Israeli public. Consequently, their report attributed that public support to Israel's abrogation of the civil liberties of the operation's opponents.

In contrast, the Goldstone Report downplays the importance of Hamas's systematic persecution of women, Christians and its political opponents.

Many Israelis have expressed disgust with Goldstone, a South African Jew who purports to "love Israel."

This is a reasonable reaction, for Goldstone indeed disgraced himself by leading this commission. But the fact is that the report would have drawn the same conclusions based on the same lies regardless of who led the commission. By its very nature, the UNHRC is incapable of doing anything else. Like the UN itself, it is a body dominated by dictatorships and supported by leftist elites who love them. Its political agenda, of supporting dictatorships on the one hand and attacking Israel on the other, is indistinguishable from that of the Organization of the Islamic Conference.

THEN THERE is Iran. Before he flies to New York for his annual visit, Iranian President Mahmoud Ahmadinejad intends to finish off his political opponents back home.

Friday is Jerusalem Day in Iran. Jerusalem Day is the day the regime organizes mass demonstrations throughout the country calling for Israel's destruction. The regime's democratic opponents, who since the stolen June 12 election have been doggedly maintaining their protests against Ahmadinejad, Ayatollah Ali Khamenei and the police state they run, are planning to use the day to stage renewed protests. Aware of their intention, Khamenei warned that anyone demonstrating for anything other than Israel's destruction will be severely punished. Reports abound of the regime's plan to use the day to arrest opposition leaders Mir Hossain Mousavi and Mehdi Karoubi, who both ran against Ahmadinejad in June.

Friday would be a good day to arrest them. After all, now that the US has agreed to hold negotiations with Ahmadinejad's representatives next month about whatever Iran would like to discuss, the Americans have lost any residual leverage they still held over Iran. Today it is Ahmadinejad, not the US or the UN Security Council, who sets the agendas and conditions for meetings. And Ahmadinejad can be certain that in light of this, no one will utter a peep if on the eve of his trip to America, he arrests or even murders his chief political opponents.

In the weeks following the election, before the regime began its crackdown and arrested, killed, tortured and raped thousands of its opponents, many of the demonstrators held signs demanding to know where the UN was. Why, they wished to know, was no one at the UN supporting them in their demands for democracy and human rights? Why was there no international community standing at their side as they sought to bring down the most dangerous regime on earth - a regime that has made genocide a strategic goal and is steadily working to acquire the means to commit genocide through nuclear war even as it murders its own people?

And that's the thing of it. The same UN that appoints a new commission to criminalize Israel seemingly on a weekly basis, has been a major facilitator of Iran's nuclear weapons program.

First, for three years, from 2003 until 2005, the UN's International Atomic Energy Agency ignored mountains of evidence that Iran is pursuing nuclear weapons and refused to refer the issue to the Security Council. Then, after the IAEA finally referred the issue to it, the Security Council failed to pass anything but the mildest of sanctions against Iran. Worse than doing nothing to prevent Teheran from acquiring nuclear weapons, these Security Council sanctions actually facilitated the Iranian program. While passing ineffective sanctions, the council gave the appearance of addressing the issue and so made it impossible for individual states to convince other states to adopt harsher, and perhaps more effective measures - like for instance cutting off trade with Iran or divesting from companies that trade with Iran - outside the Security Council.

DUE TO the UN's unvarnished belligerence toward it, in recent years a consensus has formed in Israel that there is nothing to be gained from cooperating with this openly and dangerously hostile body. Reflecting this consensus, Israel's leaders, from former prime minister Ehud Olmert to Prime Minister Binyamin Netanyahu to President Shimon Peres, are united in their condemnation of the Goldstone Report.

For a time during president George W. Bush's first term in office, the US also recognized that the UN and the UN-based international system is irredeemably corrupt. Bush and his senior advisers spoke of the need to build international coalitions of willing governments to advance the causes of international security, human rights and freedom that the UN and its affiliated bodies are inherently incapable of advancing. Although this policy received public support at home, it provoked fierce opposition among the US foreign policy elites in Washington and in the media and among their allies on the political Left.

Due to their criticism, by his second term in office, Bush agreed to give the UN a leading role in dictating US foreign policy. He subordinated American policy to the Security Council on the issue of Iran's nuclear weapons program and cooperated with the UN as it advanced its openly anti-Israel agenda, even increasing US funding of such anti-Israel groups as UNRWA.

Bush's eventual surrender to the establishment set the course for what under President Barack Obama has become a cornerstone of US foreign policy. Unlike Bush, Obama has enthusiastically embraced the notion that the UN should by rights have a leading role in international affairs. He has also accepted the UN's basic notion that in the interest of world peace, the US and its democratic allies should bow to the desires of despots and dictators.

Until Obama came along, Israel could afford not to make too much of the fact that its enemies control the UN-led system of international institutions, because it could trust that the US would use its Security Council veto to prevent these forces from causing it any real harm. This is no longer the case. With the Obama administration fully on board the UN agenda, Israel and other threatened democracies like Honduras, Poland, the Czech Republic, South Korea and Japan will have to loudly proclaim the UN-based international system's inherent moral, political and legal corruption and seek ways to undermine and weaken its power.