Carl Jackson
|
Posted: Dec 20, 2016 12:21 PM
Share   Tweet
The opinions expressed by columnists are their own and do not necessarily represent the views of Townhall.com. 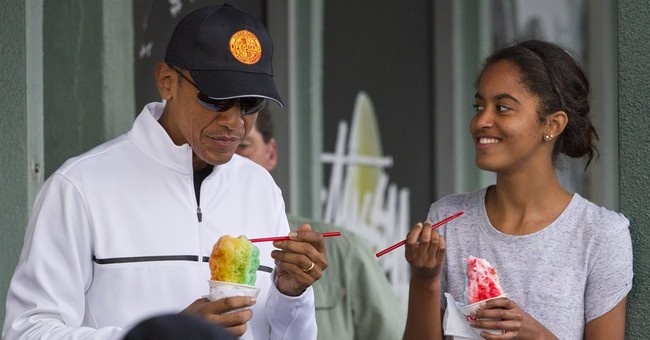 If you think the left is upset about president-elect Trump’s billionaire cabinet picks just wait until they hear about President Obama’s real-estate purchases! As President Obama and First Lady Michelle Obama prepare to take their last Hawaiian vacation on the government dime, many are left wondering what’s next for the charismatic couple that fundamentally transformed American culture and politics. Perhaps, the question to ask is “where next?”

Talk about out of touch! At some point the left has to decide whether “evil One Percenters” like the outgoing president are friends or foe, if the accumulation of personal wealth is good or bad, and if legitimate success, unlike wealth redistribution (a.k.a. theft) through social justice, is worthy of admiration or scorn. Not to mention, if the Apostle Paul was right when he said in 2 Thessalonians 3;10: “if a man will not work he shall not eat.” Until that occurs, how about we just ridicule these left-wing hypocrites!

Had conservatives known social justice would become such a lucrative industry for democratic elitists, perhaps some of us might have been tempted to screw the little guy, secure our own financial future, and fill our campaign coffers like the disgraced Hillary Clinton, Harry Reid, Nancy Pelosi, Bernie Sanders, and President Obama himself. But, noooo! Instead, we selfishly chose to champion capitalism! You know, the free market system that has helped more people escape poverty worldwide than any other; that relies on God-given talent, ambition, drive, hard work, competition, equal opportunity for all ethnicities, creativity and a bit of luck, otherwise known as preparation. How selfish could we be?

I wasn’t a huge fan of Donald Trump during the primary season because I believed then as I do now that he’s a Big Government Republican. Having said that, except for a few questionable cabinet picks that I’m cautiously optimistic about, namely Nikki Haley, Lt. Gen. Michael Flynn, and Rex Tillerson of Exxon Mobil for Secretary of State, Trump’s cabinet picks have been impressive. The left disagrees. A couple of weeks ago, the NY Times wrote a hit piece on some of Trump’s cabinet appointees because they’re billionaires. It was entitled “Trump’s Economic Cabinet Picks Signal Embrace of Wall St. Elite.”

To the contrary, I believe Trump’s cabinet picks signal an embrace of success! Whether you’re speaking of Steve Mnuchin as Treasury Secretary, Betsy Devos as Secretary of Education, Wilbur L. Ross Jr. as Secretary of Commerce, Todd Ricketts as Deputy Commerce Secretary, or Vincent Viola as Secretary of the Army, these are hardworking and accomplished Americans who can teach us all a lesson on how to achieve our own dreams. These “billionaires,” that are virtually volunteering their time to serve our country will undoubtedly make an incredible contribution to our nation by rolling back burdensome regulations that have hurt America’s labor force. As job creators, they should be revered not maligned. These titans of industry employ the “forgotten man,” while leftists steal from them under the guise of “social justice.”

President Obama’s real estate purchases are a perfect example of the unjustifiable profitability of social justice warriors. While democratic elites claim to fight for “income inequality” and the “little guy,” they often enrich themselves off the backs of their constituents. Apparently living off the largesse of the government is moral but becoming rich in the private citizen sector is not. After President Obama leaves the opulence of 1600 Pennsylvania Ave., he’ll have no less than four homes waiting for him. You heard me right! Wishing your college major was social justice? Here’s a look at the President’s estates:

1) According to the Daily Wire, the Obamas will move into a nine-bedroom mansion in the affluent Kalorama section of Washington after leaving the White House, complete with a gourmet kitchen and butler’s pantry while Sasha Obama finishes high school.

2) Next on the list, is a vacation home in Hawaii that is likely the famous Robin Masters Estate from the 80s hit show Magnum P.I. that starred Tom Selleck. The home was purchased for $8.7 million via a corporate concern controlled by Marty Nesbitt – a financier and golfing buddy to the president.

3) Who can forget the Obama’s 8,232- square-foot home in the gated community of Rancho Mirage, California purchased in 2014 according to the Los Angeles Times and USA Today? It’s the former home of novelist Joseph Wambaugh. The neighborhood is also where icons Frank Sinatra, Bob Hope, and Bing Crosby once lived. It’s a four bedroom, 4.5 bath home that rest atop 3.29 acres and has a main house, built in 1993, complete with a gym, a pool with a 20-foot waterfall, a rock lagoon, two spas, a misting system, a putting green with a sand trap. Also on the property there’s a guest house with three bedrooms and three bathrooms. Not too shabby for a community organizer turned president with a $400,000 annual salary!

4) Lastly, who can forget the sweetheart real-estate deal the Obama’s received from the infamous Tony Rezko for their Georgian brick mansion in Chicago, Illinois?

Imagine the number of the Obama’s former constituents they’ll have to share their homes with on a routine basis if they truly believe in “spreading the wealth around.” They’d better stock up on Febreze and toilet paper before they leave the White House to toil amongst us po’ folk because things could get messy! Of course, we all know that won’t happen.

Listen, to believe social justice is a virtue is to believe that thievery is moral, individual talent is immoral and unfair, and the ability to become wealthy through hard work is a sin. By extension, buying stuff that your neighbor can’t afford is unrighteous. That’s crazy!

The truth is social justice doesn’t reconcile with Biblical truth. God neither favors the poor or the rich, but admonishes us all. True justice requires equality before the law, not equality of income or abilities. Deep down, I think the Obamas know that and now, so do you.