Why Jim Bridenstine is Well Qualified to Head NASA

Calvin Beisner
|
Posted: Sep 14, 2017 12:01 AM
Share   Tweet
The opinions expressed by columnists are their own and do not necessarily represent the views of Townhall.com. 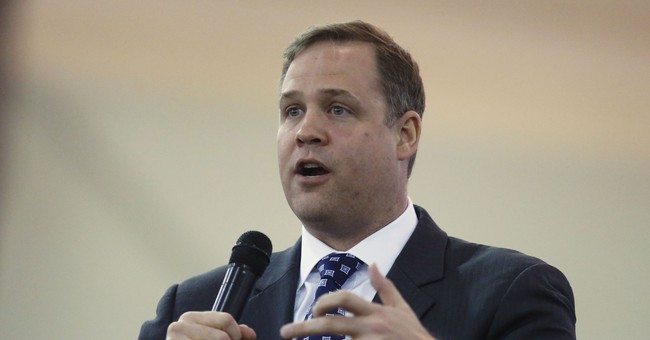 “Scientists and astronauts are usually chosen to lead NASA, for obvious reasons. Bridenstine is neither ….”

Likewise, ClimateHawksVote.com, led by 350.org founder and environmental activist Bill McKibben and self-described Communist and former Obama adviser Van Jones (neither a scientist), says, “NASA needs to be run by someone who respects science. Not climate denier Jim Bridenstine.”

And David Roberts, who once said of climate-change skeptics, “When we’ve finally gotten serious about global warming … we should have war crimes trials for these bastards—some sort of climate Nuremberg,” objected that Bridenstine is “a climate denier with no scientific credentials.”

A little fact checking might have saved them some embarrassment. But before we get to that, an aside will be helpful.

When they’re not saying the only people who can speak authoritatively about climate change are “climate scientists” (a term that shrinks or expands to include or exclude the right and wrong people), climate alarmists routinely write off engineers as not even scientists, let alone “climate scientists.”

That’s how they justify ignoring the group of distinguished retired NASA engineers who call themselves The Right Climate Stuff team. By application of the principles of radiative heat transfer, TRCS members have concluded that human influence on climate is minimal and couldn’t become catastrophic even if we burned all the fossil fuels in the earth’s crust.

So as you read on, keep in mind that to climate alarmists, engineers aren’t even scientists, let alone climate scientists. So if non-scientists aren’t qualified to lead NASA, engineers are excluded.

Twenty people have been NASA administrator or acting administrator. Of those, twelve have been engineers. The second most common background? Administration—three (or four, if you include one whose master’s was in information systems), for each of whom the most advanced degree was a master’s in administration or management. Physicists come in second place—all two of them.

Bridenstine’s most advanced degree? A master’s in business administration. So he has the same highest degree as three past NASA administrators.

How many of NASA’s twenty past administrators have had degrees in (non-engineering) science? Three—all with Ph.D.’s, the two in physics plus one in chemistry.

But climate alarmists also routinely dismiss physicists (like S. Fred Singer and Will Happer) and chemists as unqualified to address climate change because they’re not “climate scientists.” So apparently Nuccitelli and company wouldn’t have been satisfied with these three administrators, either.

Five administrators had no degree higher than a bachelor’s—all in engineering. Among them are current Acting Administrator Robert M. Lightfoot Jr.; NASA’s first administrator, T. Keith Glennan (1958–1961); and its longest-serving, Daniel S. Goldin (1992–2001).

In short, Bridenstine—a former Navy Reserve pilot, former executive director of the Tulsa Air and Space Museum and Planetarium, current member of the House Science, Space, and Technology Committee, and an avid backer of space exploration (NASA’s chief mission)—is equally well qualified as many past administrators to lead NASA, and better than some.

Ah, but Bridenstine’s opponents have another beef. “Bridenstine is a climate denier!” Indeed, Nuccitelli quotes him as having “reeled off this string of climate myths on the House floor in 2013”:

But every one of those claims is either patently or arguably true.

There was no statistically significant increase in global average temperature

and I could cite more. Bridenstine’s claim in 2013 was well justified by the data—and remains so today.

Does global temperature correlate with Sun and ocean cycles? In August 2016 Kenneth Richard listed 35 scientific publications that confirmed that ocean cycles and the Sun were the main climate drivers. Later that year, and updated in March of 2017, two climate scientists and a statistician published a paper concluding that after controlling for solar, volcanic, and El Niño/Southern Oscillation (ENSO) variability, “there is no ‘record setting’ warming to be concerned about. In fact, there is no Natural Factor Adjusted Warming at all.”

Other scientists contest this, but Bridenstine’s claim is at least arguably true.

Was the Medieval Warm Period “warmer than today”? Hundreds of scientific studies have concluded that it was, the most recent being one in GeoResJ, the gist of which the authors summarize in The Spectator Australia, saying:

After applying the latest big data technique to six 2,000 year-long proxy-temperature series we cannot confirm that recent warming is anything but natural—what might have occurred anyway, even if there was no industrial revolution. … There are, however, multiple lines of evidence indicating it was about a degree warmer across Europe during the MWP—corresponding with the 1200 AD rise in our Northern Hemisphere composite.  In fact, there are oodles of published technical papers based on proxy records that provide a relatively warm temperature profile for this period.

So Bridenstine is at least arguably right on that claim, too.

But in an interview with NPR in 2007, Griffin said that while he had “no doubt that … a trend of global warming exists” and that “recent findings … appear to have … pretty well nailed down the conclusion that much of that is manmade,” he couldn’t say whether manmade global warming was “a long-term concern or not,” because “To assume that it is a problem is to assume that the state of Earth’s climate today is the optimal climate” and deciding that “right now is the best climate for all other human beings [is] a rather arrogant position,” adding, “I don’t think it’s within the power of human beings to assure that the climate does not change.”

So Griffin wouldn’t have pleased Nuccitelli and company either.

After initial objections, Bridenstine seems to have growing support, according to the Washington Post. He should. He’s well qualified for a position that has far more to do with management than with science—even the science of space exploration, NASA’s main mission, let alone climate change, a sidelight.