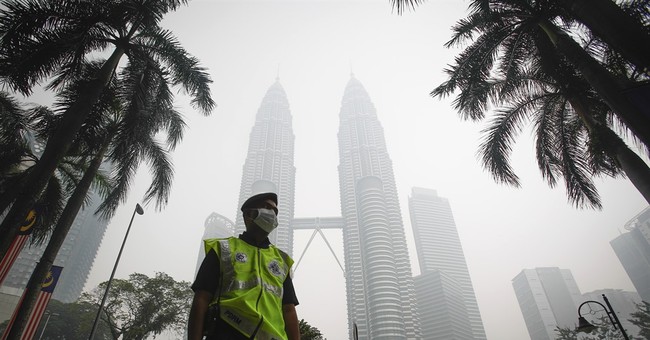 Why did one of the world's top physicists—ever—sign the Cornwall Alliance for the Stewardship of Creation's Open Letter to Pope Francis on Climate Change, which challenges climate alarmism, though he's a liberal, a Democrat, likes President Obama, and has a strong background in climate science? His interview with the UK Register and his foreword to a new study titled Carbon Dioxide: The Good News reveal some of his reasons.

Freeman Dyson believes increasing atmospheric CO2 content does more good than harm and that President Obama "chose the wrong side" in the climate debate. He explains that climate change "is not a scientific mystery but a human mystery. How does it happen that a whole generation of scientific experts is blind to obvious facts?"

Some of those "obvious facts":

Asked by The Register 's reporter, "Are climate models getting better? You wrote how they have the most awful fudges, and they only really impress people who don't know about them," Dyson responded: "I would say the opposite. What has happened in the past 10 years is that the discrepancies between what's observed and what's predicted have become much stronger. It's clear now the models are wrong, but it wasn't so clear 10 years ago. I can't say if they'll always be wrong, but the observations are improving and so the models are becoming more verifiable" [i.e., easier to test by comparison with observations---a test that they fail, as discussed in this recent video.]

So why have so many scientists and other intellectuals been blind to these facts?

Whereas scientific inquiry, an essential element of which is the skeptic's demand for evidence rather than authority or consensus, has led to many great advances in our understanding of the world and how to thrive in it, Dyson explains, "the thinking of politicians and scientists about controversial issues today is still tribal," i.e., it promotes "tribal cohesion," feeling "at home in a group that thinks alike," and for them, "Thinking about scientific questions is still presented to the public as a competitive sport with winners and losers. For players of the sport with public reputations to defend, it is more important to belong to a winning team than to examine the evidence."

Dyson believes the tribalism of climate alarmists has roots in the U.S. government's initial steps to study the effects of CO2 emissions:

“In the year 1978, the United States Department of Energy drew up a ‘Comprehensive Plan for Carbon Dioxide Effects Research and Assessment’, which fixed the agenda of official discussions of carbon dioxide for the next 37 years. I wrote in a memorandum protesting against the plan: "The direct effects of carbon dioxide increase on plant growth and interspecific competition receive little attention. The plan is drawn up as if climatic change were the only serious effect of carbon dioxide on human activities. … In a comparison of the non-climatic with the climatic effects of carbon dioxide, the nonclimatic effects may be: 1. more certain, 2. more immediate, 3. easier to observe, 4. potentially at least as serious. … Our research plan should address these issues directly, not as a mere side-line to climatic studies." My protest received no attention and the Comprehensive Plan prevailed. As a result, the public perception of carbon dioxide has been dominated by the computer climate-model experts who designed the plan. The tribal group-thinking of that group of experts was amplified and reinforced by a supportive political bureaucracy.”

In the Register interview, Dyson made an important distinction: "Pollution is quite separate to the climate problem: one can be solved, and the other cannot, and the public doesn't understand that." The comment was in regard to coal as an energy source:

“China and India rely on coal to keep growing, so they'll clearly be burning coal in huge amounts. They need that to get rich. Whatever the rest of the world agrees to, China and India will continue to burn coal, so the discussion is quite pointless.

“At the same time, coal is very unpleasant stuff, and there are problems with coal quite apart from climate. I remember in England when we burned coal, everything was filthy. It was really bad, and that's the way it is now in China, but you can clean that up as we did in England.”

In other words, coal can be burned cleanly, as it is in all high-income, industrialized societies, so long as CO2 isn't considered "dirty," a "pollutant." And Dyson firmly believes, as he wrote in his foreword, that CO2's non-climatic effects are "are overwhelmingly beneficial," while its climatic effects are "much less damaging than the effects predicted by the climate models, and have also been frequently beneficial."

The same reasons, and more, support the Cornwall Alliance's new petition Forget 'Climate Change', Energy Empowers the Poor! and An Open Letter on Climate Change to the People, their Local Representatives, the State Legislatures and Governors, the Congress, and the President of the United States of America. Read them, add your signature, ask your friends to do likewise, and bring them to the attention of your elected officials!