The Exception That Is Costa Rica

Cal Thomas
|
Posted: Apr 18, 2019 12:01 AM
Share   Tweet
The opinions expressed by columnists are their own and do not necessarily represent the views of Townhall.com. 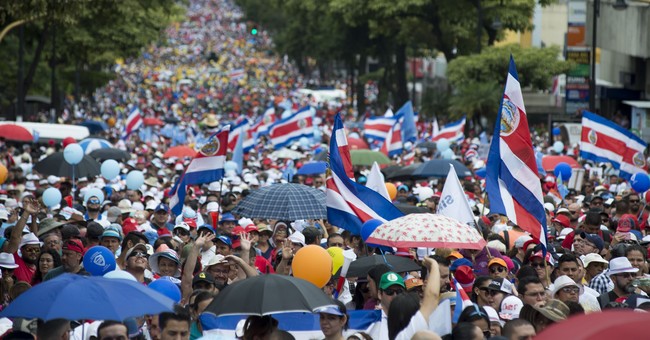 LIBERIA, Costa Rica -- In the ongoing U.S. debate about immigration, the Central American countries of Honduras, El Salvador and Guatemala are mainly in the news because many of those crossing our border from Mexico are from these nations. Why isn't Costa Rica experiencing a similar mass exodus?

I put the question to President Carlos Alvarado Quesada. In an email response he writes in part, "8 percent of our GDP is dedicated to education and our main resource is the human talent and well-being of the people who live in our country. Next Monday, for example, we will celebrate 150 years of primary education for free for all kids in the country."

Many of those fleeing other Central American countries claim to feel threatened by gangs and crime. Costa Rica has had a lower crime rate than others in the region, but that may be about to change.

According to the Costa Rica Star newspaper, the government and tourism industry started paying more attention to crime when "two female foreign tourists were killed in two days last year, and a third was raped a week later, all near Tortuguero National Park." The Costa Rican homicide rate has been rising steadily. There were 603 murders in 2017, although figures are lower than in other Central American countries.

Costa Rica is experiencing its own immigration challenge. The New York Times reported last September, "Since mid-April, when Nicaragua erupted in a violent political crisis that has left hundreds dead and crippled the economy, Nicaraguans have been leaving their country en masse -- some fleeing a crackdown by President Daniel Ortega against his opponents, others -- newly unemployed -- desperately looking for work. Many thousands have headed to Costa Rica..."

In fact, writes QCostaRica.com, "Costa Rica has the highest percentage of immigrants in Central America, according to the study Labor Market and Social Policies, of the Organization for Economic Cooperation and Development (OECD)."

Tourism is the main economic driver here. The government is concerned any perception it is unsafe to visit might cause serious financial harm.

The Heritage Foundation's 2018 economic freedom rankings place Costa Rica 61st under the category "moderately free," although President Alvarado references The Economist, which ranks his country "among the strongest 20 democracies in the world."

Not many people are leaving Costa Rica. It has the lowest emigration rate in Central America and one of the lowest in Latin America and the Caribbean. And though the unemployment rate is 9.30 percent and about 20 percent of the population lives in poverty, Costa Ricans stay put.

Part of the reason may be a new anti-poverty program introduced by the previous president, Luis Guillermo Solis. Its goal is to pull at least 54,600 targeted families out of poverty. The plan combines previous welfare benefits that have been, reports the Tico Times, "distributed through 30 separate programs, administered by 20 different agencies." Families are to be assessed according to their needs and not a-one-size-fits-all formula. Job training and education scholarships are part of the plan so that poverty doesn't become a life sentence.

President Alvarado, 39, and a center-leftist, has different priorities. The major issue in the last election was same-sex marriage. The former president opposed it, while Mr. Alvarado supports it.

Mr. Alvarado is also a disciple of the climate-change movement. His goal is to achieve zero net carbon emissions by 2020.

How a small country like Costa Rica -- or even a larger one like the United States -- can affect the globe's naturally changing temperatures -- especially when major polluters like China, India and, yes, the United States aren't doing much to reduce carbon emissions -- is never addressed. For the left, intentions count, not results.

Crime control and maintaining a vibrant tourist industry seem to be better and more attainable goals than changing the climate and promoting same-sex marriage.