Cal Thomas
|
Posted: Aug 08, 2018 12:01 AM
Share   Tweet
The opinions expressed by columnists are their own and do not necessarily represent the views of Townhall.com. 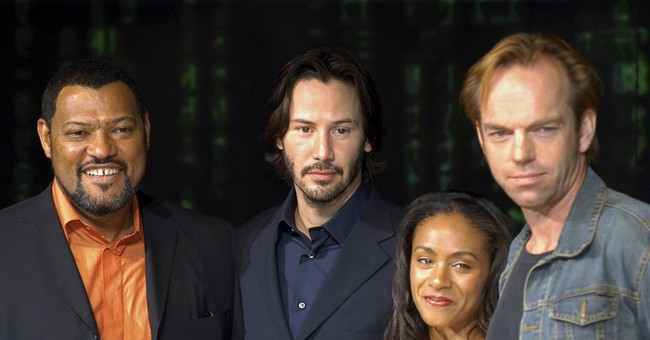 Next year marks the 20th anniversary of the sci-fi movie classic "The Matrix," which depicts powerful machines attempting to subdue the human race.

Sometimes art imitates life, and sometimes it's the other way around. On occasion, art can be prophetic. "The Matrix" is such a film. It warns of a future in which the power and worth of the individual is subsumed into one giant interconnected world run by a tiny elite, who rob individuals of their liberty and ability to think freely.

In his new book, "World without Mind: The Existential Threat of Big Tech" (Penguin Press), Franklin Foer, a national correspondent for The Atlantic and former editor of The New Republic, expands on the film's warnings. Foer asserts that technology is replacing thought and relationships. He specifically warns of the goals of Google, Facebook, Amazon and other corporate tech giants, charging them with being "monopolists who want access to every facet of our identities and influence over every corner of our decision-making."

Sometimes employing language that recalls ancient biblical prophecies and the end times foreseen in Revelation, Foer warns these companies eventually want to insert devices in our bodies to allow others to think for us. "Google Glass and the Apple Watch," he says, "prefigure the day when these companies implant their artificial intelligence within our bodies."

How will this be "sold" to the public? Foer writes it will be sold just like any other product or service: "...they justify monopoly with their well-articulated belief that competition undermines our pursuit of the common good and ambitions."

There's more, much more. "The tech companies are destroying something precious, which is the possibility of contemplation. They have created a world in which we are constantly watched and always distracted. Through their accumulation of data they have constructed a portrait of our minds, which they use to invisibly guide mass behavior (and increasingly individual behavior), to further their financial interests." This, he believes, is a threat to thought and democracy.

Foer says these tech giants have a vision that supersedes their financial goals. That vision, he says, was hatched in the 1960s (though conceived by the French philosopher and mathematician Rene Descartes in the 17th century) and includes a world without borders. It is their view that only they can save the world by concentrating all power in a select few. They see themselves as saviors of the world. In technology they -- and we -- must trust.

Students of Scripture will immediately think of the "anti-Christ," who rises to power with the ability to perform miracles and who wins the allegiance of the Earth's inhabitants; except he might not be a person at all. "He" might be a machine.

In his sobering prologue, Foer writes: "The time has arrived to consider the consequences of these monopolies, to reassert our own role in determining the human path. Once we cross certain thresholds -- once we transform the values of institutions, once we abandon privacy -- there's no turning back, no restoring our lost individuality."

We have been warned before and are now being warned again in Foer's excellent book. The tech giants openly state their goals. How many are listening?

In the final scene of "The Matrix," Neo, the lead character and redeemer figure, says: "I don't know the future. I didn't come here to tell you how this is going to end. I came here to tell you how it's going to begin. ... I'm going to show them ... a world without rules and controls, without borders or boundaries. A world where anything is possible. Where we go from there is a choice I leave to you."