Cal Thomas
|
Posted: May 08, 2018 12:00 AM
Share   Tweet
The opinions expressed by columnists are their own and do not necessarily represent the views of Townhall.com. 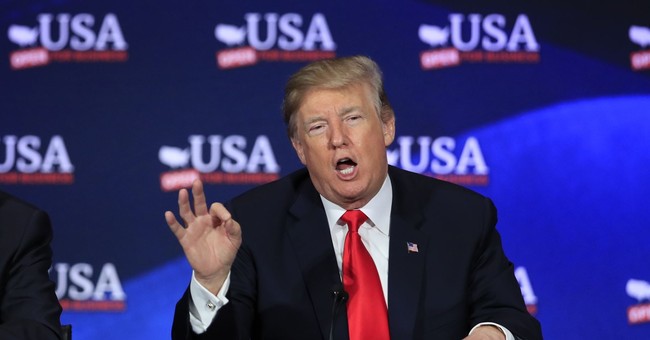 The "wall of protection" conservative media has erected around President Trump may be crumbling.

Fox News Channel, whose opinion programs -- especially Sean Hannity's -- have been staunch defenders (some critics say mouthpieces) for the president, and The Wall Street Journal, which editorially has been generally supportive of the president's policies, last week went on the attack.

In a lengthy commentary, Fox News anchor Neil Cavuto directly addressed the president, noting he had "promised to drain the swamp, but you are muddying the waters." The reference was to Trump's admission that he authorized a $130,000 payoff to adult film star "Stormy Daniels" to secure her silence about an alleged one-night stand she had with him. This after vehemently denying the incident ever happened. Cavuto also cited numerous other false claims, comments, charges and accusations made by the president.

A lead editorial in last Friday's Wall Street Journal addressed those who say they don't care about the president's personal life, but are only interested in his policies, which they see as working: "But Mr. Trump's public deceptions are surely relevant to his job as president, and the attempted cover-up has done greater harm than any affair would have. Mr. Trump asked Americans, not least his supporters, to believe his claims about the payments. They were false and conveniently so in putting the onus on (attorney Michael Cohen). Now, as more of the story has emerged, he wants everyone to believe a new story that he could have told the first time."

Does Trump sound like Chicken Little, who cried, "the sky is falling" so many times that no one believed him when the sky actually did fall?

The Journal ends on this disturbing note: "Mr. Trump is compiling a record that increases the likelihood that few will believe him during a genuine crisis -- say, a dispute over speaking with special counsel Robert Mueller or a nuclear showdown with Kim Jong Un. Mr. Trump should worry that Americans will stop believing anything he says."

This is all so unnecessary. So many good things are happening. For the first time since December 2000, the U.S. unemployment rate has fallen below 4 percent, black and Hispanic unemployment rates hit record lows in April, there is rising consumer confidence, the forthcoming meeting with Kim Jong Un and a new Rasmussen Reports poll showing the president's approval rating at 51 percent.

Conservatives can argue with some credibility that the media and the rest of the establishment hate the president and want to see him impeached, but he is increasingly giving them the rope to hang him.

Will this matter to hardcore Trump supporters? And what about the evangelicals who so strongly supported -- and mostly continue to support -- the president? These were the ones who said character matters. I'm betting their hatred of Washington, the media and Democrats will remain virulent. How do I know this? Because whenever I have criticized them for their blanket pardon of anything and everything the president has done or remark that their support runs antithetical to their core religious beliefs they write to criticize me.

Will it make a difference in the coming midterm elections? It didn't in 2016, but this time Hillary Clinton won't be on the ballot for conservatives to vote against. And Democrats, don't forget, thought they had that election in the bag for her, as they do this upcoming election cycle and in 2020.

For some, though, the exhaustion factor may be setting it. When Fox News and The Wall Street Journal effectively call out the president for lying to the American people, where do Trump supporters go for their red meat?