Cal Thomas
|
Posted: Mar 29, 2018 12:01 AM
Share   Tweet
The opinions expressed by columnists are their own and do not necessarily represent the views of Townhall.com. 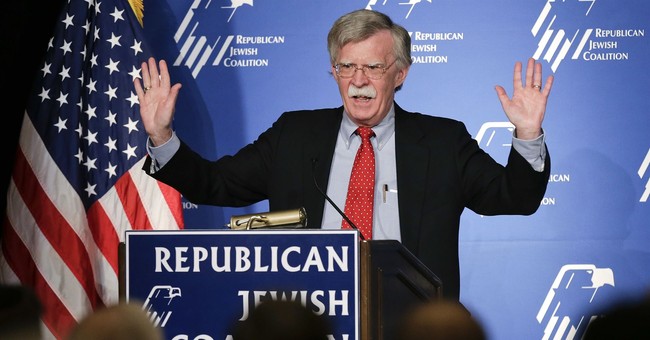 Among the several ways to judge a person's fitness for office are the enemies he has made.

In the case of John Bolton, President Trump's choice to become national security adviser, those who oppose his appointment -- liberals, neocons and some Republicans all with differing worldviews and questionable foreign policy experience -- appear to say more about his qualifications than those who support him.

A New York Times editorial said that at least Bolton speaks his mind, though it also said it didn't like what was on it. The Times and their ideological sister publication, The Washington Post, have spilled considerable amounts of ink in negative stories, editorials and columns in their attempts to undermine and discredit Bolton. Why?

I think one of the reasons these newspapers, the foreign policy establishment and certain enemies (and allies) of America oppose Bolton is because he is a clear thinker. He is not an appeaser. He believes nations and terrorists who publicly proclaim their desire to destroy America should be taken seriously and that credible planning should be done to make sure it that destruction doesn't happen. Peace through strength has worked before and Bolton believes it can work again. Strength is what deters bullies, not trying to "understand" their hostility toward America, as Hillary Clinton once recommended.

The weak always fear the strong because among other things it exposes their weakness. John Bolton exposes the weakness of America's foreign policy under several presidents. Enemies cannot and must not be appeased or coddled. Enemies must be defeated, or at a minimum, deterred from making war against America and our interests. History shows the results of appeasement and they are never good for free people or those struggling to gain freedom under totalitarian regimes.

Writing about Bolton's appointment, Jerusalem Post columnist Caroline Glick rightly stated: "For the better part of three decades, Bolton has bravely held positions that fly in the face of the establishment's innate preference for appeasement. He was a vocal critic, for example, of then-President Bill Clinton's disastrous nuclear diplomacy with North Korea." Bolton was also a critic of President Obama's nuclear deal with Iran. Some of his predictions and policy recommendations turned out to be right.

Here are some pithy Bolton-isms that are clear-eyed and have the advantage of being right. About diplomatic dealings with Iran, Bolton has said: "When you have a regime that would be happier in the afterlife than in this life, this is not a regime that is subject to classic theories of deterrence."

There is also this about the United Nations to which he was once the U.S. ambassador: "There's no such thing as the United Nations. If the U.N. secretary building in New York lost 10 stories, it wouldn't make a bit of difference." But then Bolton is equal opportunity when it comes to dysfunctional bureaucracies: "You could take several stories off the buildings of most U.S. government agencies and we'd all probably be better for it, too."

The media love to attach labels to Bolton, among them "hawkish," "dangerous" and "hard line." Given the kind of threats we face from enemies who better fit those adjectives, John Bolton seems an ideal pick to advise the president on national security issues he knows a great deal about.