Cal Thomas
|
Posted: Mar 22, 2018 12:01 AM
Share   Tweet
The opinions expressed by columnists are their own and do not necessarily represent the views of Townhall.com. 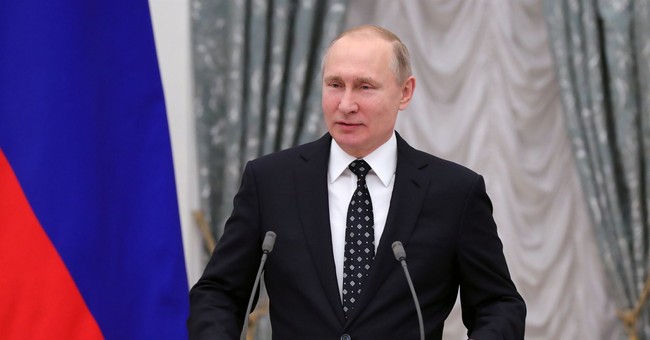 Perhaps Vladimir Putin was using his experience meddling in U.S. elections to meddle in his own. Putin "won" re-election last Sunday with about 76 percent of the vote, not as much as the 99 percent Iraqi dictator Saddam Hussein "won" and maybe not as impressive as the nearly unanimous vote by the People's Congress to allow China's Xi Jinping to effectively be president for as long as he wishes, but impressive nonetheless.

Well, not really all that impressive since Putin effectively wiped out (or rubbed out) any serious opposition. And speaking of wiping out, how about his alleged (and here I use the word only in a legal sense) use of deadly WWII nerve gas in an attempt to extinguish two former spies who served as double agents? They remain in critical condition in a London hospital.

In a style familiar to those who remember the Cold War, Russian toadies blame everyone but themselves -- the UK, the U.S. and other foreigners. But they "credit" the West's criticism of Russia for the high voter turnout.

The UK Daily Mail, which often reports U.S. stories before the American media get to them, tells of "wrestlers, nuns and 'independent' monitors" caught on video stuffing ballot boxes and otherwise fixing votes for Putin. A Putin spokesman told the Interfax news agency that Putin won an "incredible victory" and that the large percentage of votes that went to him "speaks for itself." Given the corruption, it certainly does.

The larger question for the West is what happens next? Will Putin feel emboldened to be even more aggressive than he has been against neighboring countries, perhaps invading another one with some sort of phony excuse to paper over his aggression? Will even more Putin enemies, including journalists who dare to print the truth about him and his tactics, wind up dead under suspicious circumstances? Will that nerve agent that nearly killed -- and may still kill -- the two former Russian spies, and which has been banned for decades by international law governing chemical weapons, start showing up in other places and become a weapon of choice for Russia?

And then there is the ultimate question. What will and what can President Trump do about all this? During the 2016 presidential campaign, Trump was solicitous of Putin, refusing to condemn him for his aggressive tactics in Ukraine and later as president reluctant to conclude that Russia interfered in the U.S. election.

President Obama was similarly solicitous, almost obsequious, with Putin's puppet, President Dmitry Medvedev. Obama told Medvedev in 2012 during one of those "caught on open mic moments" that he would have "more flexibility" to address Russia's concerns about European missile defense after he won re-election, to which Medvedev replied, "I understand. I will transmit this information to Vladimir."

Must America and the West return to a Cold War mentality and prepare for a type of Soviet Union 2.0? Are we headed back to the doctrine of "mutually assured destruction" with growing numbers of ICBMs pointed at each other?

In January, President Trump slapped sanctions on a list of Russian oligarchs, but refused to apply broader sanctions against the country. The pressure is on for him to go further. If he does, will it make a difference, or will Putin continue his "make Russia great again" policies?

Ronald Reagan believed in "peace through strength" and contributed to the downfall of the Soviet Union by successfully employing that policy. Does Trump have a similar policy when it comes to modern Russia? Does he have any policy? He had better because Putin has one and a corrupt election is only part of it.