Cal Thomas
|
Posted: Aug 31, 2017 12:01 AM
Share   Tweet
The opinions expressed by columnists are their own and do not necessarily represent the views of Townhall.com. 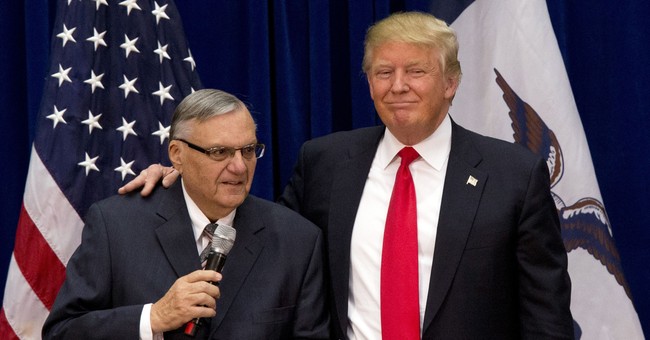 President Trump's pardon of Joe Arpaio, the former sheriff of Maricopa County, Arizona, has drawn predictable responses. The left, which long ago exceeded its sell-by date when it comes to ideas that work, denounced the decision as racist (that's all they have) and a perversion of justice. Some moderates, like Sen. John McCain and Sen. Jeff Flake, both Arizona Republicans, Speaker Paul Ryan (R-WI) and former Florida Governor Jeb Bush, joined the critics.

Arpaio, who is 85, was convicted of disobeying a 2011 federal court order to halt traffic patrols that targeted immigrants. He faced up to six months in prison.

The White House issued a list of reasons for the president's decision, which included Arpaio's age, his service to the country, including enlistment in the military at the start of the Korean War, and his work as a police officer and special agent for the Drug Enforcement Administration.

Arpaio's defenders say he was trying to help the federal government identify people in the country illegally. His opponents say he profiled Hispanics only, and thus engaged in racism. Given that Mexicans, according to U.S. Census Bureau data, make up the largest group of unauthorized immigrants, it made sense to focus on this group. That the number of unauthorized immigrants from Mexico has been decreasing, matters little, as the number of immigrants from Central America and Asia has increased.

Even critics must acknowledge that any president has sole discretionary authority under the Constitution to pardon anyone for almost anything, except offenses against the United States and curtailing the impeachment process.

It is instructive to review some of the hundreds of pardons delivered by Bill Clinton and Barack Obama when they were president. Many were granted to people whose resumes do not come close to the services rendered to the nation by Sheriff Arpaio.

President Obama issued 70 pardons during his two terms as president. He pardoned minor drug offenders, bank embezzlers, military deserters, and, according to the Chicago Tribune, a young sailor court-martialed and demoted for taking four pounds of butter from his Navy base in 1947.

Bill Clinton's pardon list contained names of people who committed crimes a little more consequential, some even a little suspect. His most notorious pardon was granted to Marc Rich, a major donor to the Clinton campaign. The Rich pardon came during Clinton's last hours in office and was condemned by leading Democrats, including former President Jimmy Carter.

For those with short memories, Rich was indicted in the United States on federal charges of tax evasion and making controversial oil deals with Iran during the Iran hostage crisis. Rich, who fled to Switzerland when he was indicted, never returned to the U.S., and died there in 2013.

Clinton later said he regretted the Rich pardon. Without a hint of irony, he said, "It wasn't worth the damage to my reputation." Most of Clinton's other pardons were far less controversial. They included convictions for bank fraud and "odometer rollback."

The president's pardon of Arpaio is a far cry from those granted by Clinton and Obama. He was correct in sighting Arpaio's age and service to the country among his reasons for granting it. His conviction had political overtones and it is perfectly fitting that the pardon addressed his conviction partially on a political level.

Arpaio reached the same conclusion when he tweeted: "Thank you @realdonaldtrump for seeing my conviction for what it is: a political witch hunt by holdovers in the Obama Justice Department."