Will We Ever Learn?

Cal Thomas
|
Posted: May 09, 2017 12:01 AM
Share   Tweet
The opinions expressed by columnists are their own and do not necessarily represent the views of Townhall.com. 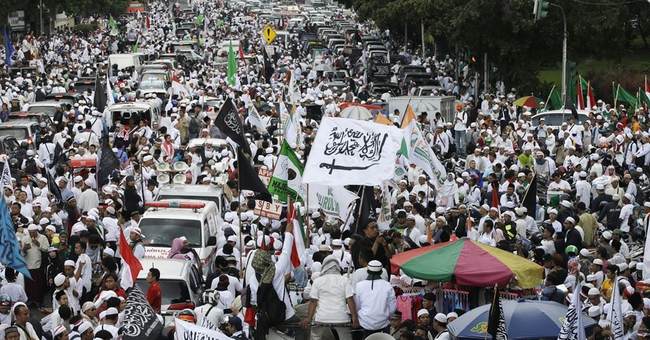 President Trump is about to score a religious trifecta, visiting Saudi Arabia, Israel and Rome, the "home" of three monotheistic religions. The president has said he wants to make the ultimate deal and achieve peace between Israel and the Palestinians.

While the goal is similar to a high school kid attempting to hit a curve ball from an all-star pitcher, the scenario cannot end well for Israel. How do I know this? One has only to look at history. There has never -- never -- been a time when an American president has sought to lessen tensions in the region that Israel has not been smeared as the main impediment and required to "do more" to make peace happen. Israel is not an impediment to peace. Her enemies are.

Here's the danger for President Trump. The Koran allows Muslims to lie to "nonbelievers" in pursuit of Islam's goal of an earthly kingdom ruled by their religion. An example occurred last week when Palestinian Authority President Mahmoud Abbas met at the White House with President Trump. Abbas said, "Mr. President, I affirm to you that we are raising our youth, our children and grandchildren, in a culture of peace."

That is a flat-out lie, as even a cursory Google search or visit to the Palestinian Media Watch website proves. President Trump correctly saw the problem in a campaign speech to the American Israel Public Affairs Committee: "In Palestinian textbooks and mosques, you've got a culture of hatred that has been fomenting there for years. And if we want to achieve peace, they've got to go out and they've got to start this educational process. They have to end education of hatred."

Which country promotes the most extreme form of Islam in children's textbooks, mosques and their media? It is Saudi Arabia. If a person, or nation, believes they have a mandate from their "god" to lie to achieve their goals, how likely is it that even a president is not regarded as an "infidel" whose desire for peace can be used to damage Israel's best interests?

As Jerusalem Post columnist Caroline Glick correctly noted last week: "Israel is the most immediate casualty of Trump's decision to embrace Abbas and the PLO, because the PLO is Israel's enemy. Abbas is an anti-Semite. His doctoral dissertation, which he later published as a book, is a Holocaust denying screed.

"Abbas engages in anti-Semitic incitement on a daily basis, both directly and indirectly. It was Abbas who called for his people to kill Jews claiming that we pollute Judaism's most sacred site, the Temple Mount in Jerusalem, with our 'filthy feet.' The Palestinian media and school system which he controls with an iron fist both regularly portray Jews as evil monsters, deserving of physical annihilation."

This is not the attitude of one with whom a president or prime minister of Israel can make peace. A virus of hatred toward Israel and Jews is epidemic throughout the region. One is as likely to change the minds of such people as persuade a serious Christian to deny the resurrection of Jesus, or an Orthodox Jew to accept Him as Messiah. The difference is that Christians and Jews do not have world domination as their goal and violence as their method.

President Trump should re-read his AIPAC speech, because he was right to say what he said then. Abbas lied to the president during his visit. Mr. Trump can expect more lies on his trip to Saudi Arabia, whose leaders may promise all sorts of things and tell the president what he wants to hear, but won't mean it. The proof is in their interpretation of their religion. As always, the West must pay less attention to what the enemies of Israel say and more attention to what they do.