Cal Thomas
|
Posted: Apr 06, 2017 12:00 AM
Share   Tweet
The opinions expressed by columnists are their own and do not necessarily represent the views of Townhall.com. 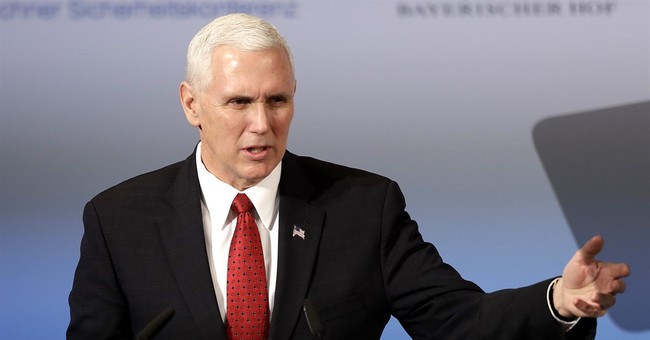 Millennials and others of a certain age have not lived in a time when fidelity was universally valued and mostly supported by culture -- though sometimes hypocritically -- and its opposite was roundly condemned. There was even a time when a divorced person could not expect to become president, though plenty of married presidents managed to conduct clandestine affairs, often with the indulgence of the media.

How far we have come (or gone) as a country and culture was evidenced by the re-election of Bill Clinton, even after reports of his alleged sexual harassment of Paula Jones were made public.

This isn't about that. It's about Vice President Mike Pence and his recently rediscovered standard of refusing to dine alone with a woman not his wife, or showing up without her at a place where alcohol is served.

This is sometimes called the Billy Graham Rule, after the famed evangelist. It isn't about prudishness, as some have claimed in their criticism of Pence, it is about preserving one's reputation and "avoiding the appearance of evil," as evangelicals like Graham and Pence would put it.

Some years ago, Rev. Graham spoke at the National Press Club in Washington, D.C. There was a reception before his speech in the bar area. One of the guests asked Graham if he could have his picture taken with him, and Graham turned to me to ask if I would hold his soft drink while the picture was taken.

I later asked him why he did this. He said it was because some people who saw the photo could conclude that he was drinking an alcoholic beverage, a no-no among Southern Baptists, though some seem to have modified their position in recent years.

Graham once told me about his own policy of never being with a woman without his wife present, or having a woman pick him up at an airport when he traveled, unless she was with her husband. It is a standard I employ, not because Graham and I (and Pence) find it hard to resist temptations of the flesh, but because it is the best protection against all sorts of negative things that could happen, or someone reading something into a picture that has the potential of damaging one's reputation.

Pence's comment was printed in a recent Washington Post profile, but he first made it in 2002 when he was a freshman in Congress at the height of the Gary Condit sex scandal, in which Condit was accused of being involved with the disappearance and murder of his intern Chandra Levy, with whom he was having an affair. Pence doesn't tell others how to live their lives. He just set a standard for his marriage. His spokesman, Marc Lotter, tells me "clearly it is working."

I've been in Pence's office. Many women work there, including his deputy chief of staff, his national security adviser, his director of intergovernmental affairs and their top deputies.

So what's the problem? I think it is that the Pence "lifestyle," for wont of a better word, stands as a rebuke to those who have chosen different ways of behaving, in or out of marriage. Deep down inside most of us know right from wrong, otherwise "Judge Judy" would not be so much fun to watch as she dispenses truths your grandmother probably agreed with and tried to teach you.

After all the criticism about President Trump's past with women, one might think the critics would welcome a wholesome example like the Pences. But in Washington, some people like having it both ways.