Cal Thomas
|
Posted: Mar 14, 2017 12:01 AM
Share   Tweet
The opinions expressed by columnists are their own and do not necessarily represent the views of Townhall.com. 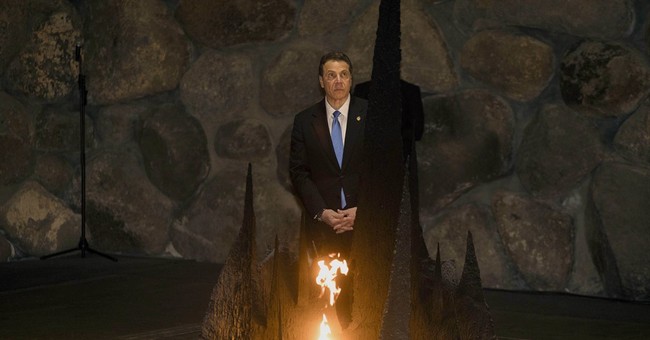 Gov. Andrew Cuomo wants to spend $1.4 billion of New York's resources to solve the persistent problem of poverty in central Brooklyn. If he wins legislative approval, Cuomo, a Democrat, intends to spend the money on affordable housing, job training, anti-violence programs, recreational space, even obesity. Some cynics suggest the proposal is targeted at boosting Cuomo's presidential prospects in 2020, but let's give him the benefit of the doubt and take his proposals seriously.

We have seen this play before, not only in Brooklyn, where the Bedford-Stuyvesant area defied virtually all anti-poverty programs and was an eyesore for decades before gentrification, not government, began its improvement at the beginning of 2000.

The modern effort to "cure" poverty was born when President Lyndon Johnson declared in his 1964 State of the Union address: "This administration today, here and now, declares unconditional war on poverty in America."

How did that work out and what lessons can and should Gov. Cuomo learn from America's longest war?

According to a study conducted by the conservative Heritage Foundation, the government has spent $22 trillion of U.S. taxpayer money fighting poverty. "Adjusted for inflation," Heritage found, "this spending (which does not include Social Security or Medicare) is three times the cost of all military wars in U.S. history since the American Revolution." And there's been little to show for it.

The study, conducted by Robert Rector and Rachel Sheffield, revealed federal and state governments spend $1 trillion annually on 80 means-tested welfare programs. One-third of all Americans receive benefits from at least one government program that could be defined as welfare, they say.

The Heritage study concludes that despite all this spending, much of which continues today, despite efforts to trim the welfare budget, the number of people considered below the poverty level remains about the same as when the war began.

Today's "poor," they note, are much better off than the poor in the mid-'60s. A household receiving $50,000 in welfare benefits today is still considered poor, but only if its pre-welfare income falls below the poverty line. Rector and Sheffield note that among contemporary poor, 80 percent have air conditioning, two-thirds have cable or satellite TV, half own a personal computer and 43 percent can access the internet. In 1964, they might have been called middle class.

A Department of Labor evaluation released conveniently on Election Day last year found federal job training programs "ineffective" in raising the earnings of participants and out of touch with the needs of employers.

What will happen if and when the $1.4 billion Gov. Cuomo wants to spend fighting poverty in one section of Brooklyn doesn't produce results? Cuomo's announced program fails to offer a choice to children trapped in failing public schools. It doesn't appear to include counseling to put or keep families together with a father in the home. Absent fathers contribute to poverty in families.

Failed government programs have never been a reason to stop repeating the cycle, hoping it will produce different results. Isn't that the definition of insanity?

There is one central characteristic to liberalism and it goes like this: No matter how many times an idea has been proved incorrect, or a program has failed to produce promised results, liberals still continue to believe in the rightness, even righteousness, of their cause. It is a cult-like faith that says something must be true simply because they and their like-minded colleagues believe it to be true.

It's like Linus in the pumpkin patch. Each October the "Peanuts" character has faith that the Great Pumpkin will rise from among those other orange spheres and deliver presents. When he doesn't, Linus is disappointed, sometimes blaming himself for not having enough faith, but he remains undeterred.

Gov. Cuomo should learn from the failed record of the War on Poverty and stop behaving like Linus.