What The Past Can Teach Us

Cal Thomas
|
Posted: Aug 16, 2016 12:01 AM
Share   Tweet
The opinions expressed by columnists are their own and do not necessarily represent the views of Townhall.com. 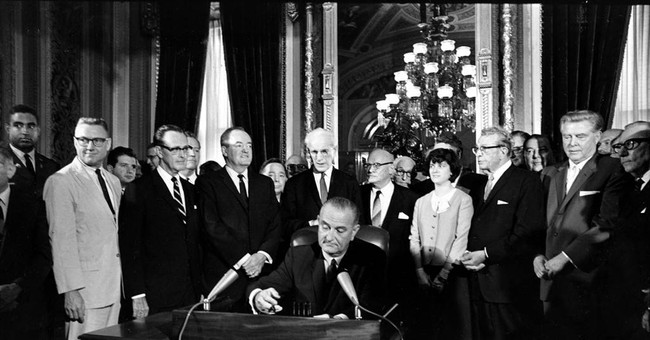 While we shouldn't live in the past, we can certainly learn from it. We are not the first humans to walk the Earth and yet too many, especially the young, suffer from the conceit that history is just a boring subject in school.

PBS is rerunning episodes on its award-winning series "American Experience" on modern presidents and the challenges they faced. Each episode retraces what presidents believed to be good ideas at the time -- from Lyndon Johnson's program to wipe out poverty and defeat the communists in Vietnam, to George W. Bush's toppling of Saddam Hussein. In each episode, historians, as well as members of those administrations, are interviewed and provide perspective only hindsight can give.

One scene in the LBJ segment is particularly instructive when thinking about the two main candidates in the current presidential race. During consideration of Johnson's pledge to create a "Great Society," there is film of him signing a large stack of bills passed by a Democratic Congress. The narrator says the bills were passed and signed so quickly no one had any idea what the programs would cost, or how they would be implemented.

This is the heart of liberalism. Little consideration is given to whether a program or idea will accomplish its stated goal, only intentions matter.

In a speech last week in Warren, Michigan, Hillary Clinton borrowed from the past, not to learn from it, but to repeat it. "So starting on day one," she said, "we will work with both parties to pass the biggest investment in new, good-paying jobs since World War II." She followed with recycled promises to repair infrastructure, such as bridges, highways and airports.

Those with short memories may have forgotten her pledges have been tried in the very recent past. Remember President Obama's "stimulus"? Remember "shovel-ready jobs"? When they didn't materialize, even the president had to joke that "shovel-ready was not as ... uh ... shovel-ready as we expected." Remember the infrastructure repair Obama promised?

Government doesn't create private-sector jobs, businesses do. Government can stimulate the private sector by lowering taxes and reducing unnecessary regulations. Hillary Clinton wants to do the reverse. In her view government has all the answers when, in fact, it has few. If it had answers, the problems we face would have long ago been solved. After so many failures, why would voters continue to trust government to fix anything?

Hillary Clinton again is using the liberal code word "investment." She means spending. As the debt approaches $20 trillion, a wise person might say we need to spend less, not more, starting with reforming entitlement programs, which consume a great deal of the budget. Would any business survive a sales strategy that has failed so dramatically?

President Obama has tried everything Hillary Clinton is proposing. It hasn't worked. Economic growth is stagnant and the 5 percent unemployment rate masks a labor force that has either given up looking for work, is working only part time or is working at jobs that pay less than the employee previously earned. Insurance companies are pulling out of Obamacare due to its high cost. Taxes will soon rise. Bloomberg.com reports home ownership is at its lowest level since 1965.

The experience of Democrat liberalism is a theme Donald Trump should hammer home. If you like the damage President Obama has caused, vote for Hillary. She will give you more of the same and you won't like it.

In his best-selling book "The Purpose Driven Life," Rick Warren writes, "We are products of our past, but we don't have to be prisoners of it."