Cal Thomas
|
Posted: Jun 02, 2016 12:01 AM
Share   Tweet
The opinions expressed by columnists are their own and do not necessarily represent the views of Townhall.com. 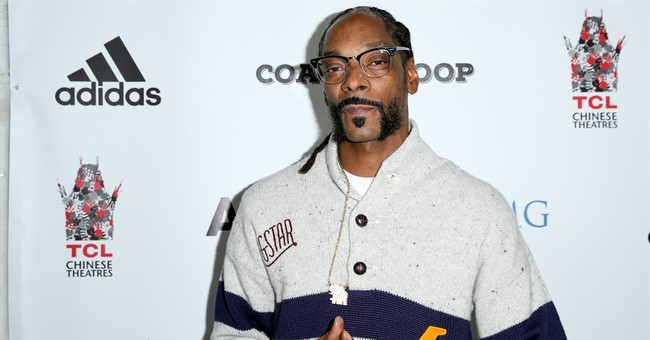 My musical tastes do not include rap and hip-hop, but when Snoop Dogg comments on the "Roots" remake, saying he is tired of movies about slavery and would prefer a series "about the success that black folks are having," he is singing my song.

The original "Roots" drew a phenomenal 130 million viewers when it aired on ABC in 1977. The remake, now playing on The History Channel, will probably draw far fewer viewers, just because it is on cable and most are familiar with the story-line. The filmmakers apparently are targeting a younger generation.

While there is no question that slavery has left an indelible mark on the descendants of slaves and the nation (former Secretary of State Condoleezza Rice has called it America's "birth defect"), continuing to dwell on the subject does nothing to improve a single black life.

Snoop's point is that seeing more stories about African-Americans who are successful would inspire more minorities to overcome the difficult circumstances in which many find themselves. He is correct.

"Roots" is depressing. Stories about overcoming obstacles are inspirational and can produce motivation. Add hard work and any life can be improved.

The kinds of examples Snoop is talking about can be found everywhere if one will seek them. My search took me to a webpage called Tech.Co and an article "38 Black Entrepreneurs Share Their Origin Stories." There is also a link to another article: "21 Most Successful Black Entrepreneurs Throughout History."

Here's one of my historical favorites: "Stephen Smith grew up as an indentured servant in Pennsylvania. From a young age, he was assigned to work in the lumberyards by Thomas Boude, whose wealth stemmed from his extensive lumber business. After buying his freedom for $50 at the age of 21, he continued to work in the lumberyards until establishing his own lumber business in 1822, as well as dealing coal. By the 1850s, Smith was grossing $100,000 in annual sales. By 1857, Smith was worth $500,000 (approximately $13.5 million today). On top of being a businessman, Smith was a minister and served as chairman of the black abolitionist organization in Columbia, PA."

The stories of modern African-American entrepreneurs and visionaries may not be as dramatic as the historical ones, but they are still compelling.

What all of these men and women have in common is that they did not accept present conditions as the final verdict on their lives. They committed themselves through hard work and the vision for a brighter future.

Take the time to read their stories. I'll bet you've never heard of most of them. Even during Black History Month, many of their stories are never told.

Why is that? One would think that these inspirational stories are tailor-made for so-called civil rights leaders, who could tell African-American kids, "If they could do it, so can you." Instead, we get stories about slavery, discrimination and charges of racism.

I live in a suburb of Washington, D.C. At night the local TV stations frequently lead with crime stories. Many involve young African-American men with guns. The image conveyed to viewers is a negative one.

There is no secret to becoming successful, or at least self-sufficient: Stay in school, avoid drugs and crime, get married before you have children and work to stay married, develop a vision.

Snoop Dogg's criminal background and misogynist lyrics may not make him the best role model for young African-Americans, but he's right about being fed-up with slavery movies. So am I.