Whom to Blame for the Rise of Trump?

Cal Thomas
|
Posted: May 03, 2016 12:01 AM
Share   Tweet
The opinions expressed by columnists are their own and do not necessarily represent the views of Townhall.com. 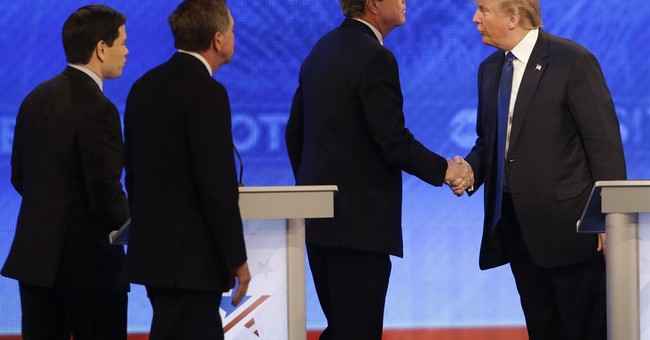 Dr. Frankenstein created the monster that bore his name and if Dr. Jekyll had not conducted those experiments in his laboratory, Mr. Hyde would never have emerged to terrorize London.

I am no fan of Trump and wish there were better candidates for president from both parties, but the major fault for his rise as the "presumptive nominee" of the Republican Party in 2016 can be laid at the feet of the very elites who are so vociferous in their condemnation of him.

It is they who have presided over the horrific national debt, spending as if there were no tomorrow. They are not good stewards of the money we make and they take. It is the elites who have started wars we should not have fought and then not fought them to win with too many "rules of engagement" that only guarantee stalemate, or victory for the other side.

They are the ones who over-regulate even small businesses, stifling their growth and preventing the creation of new ones. They so penalize initiative that if today's OSHA regulations had been applied to Wilbur and Orville Wright the two visionaries would never have emerged from their Ohio bicycle shop, much less flown for the first time at Kitty Hawk, N.C.

The career politicians, the lobbyists, the lawyers, the self-serving institution that government has become (instead of the constitutionally limited, people-serving institution it was originally created to be) have fueled the rise of Donald Trump. It doesn't help their position now that these elites appear at least as arrogant as Trump in their denunciations of him while refusing to accept responsibility for what they have failed to dismantle.

As Wall Street Journal columnist Peggy Noonan has noted, Trump projects love for America and increasing numbers of voters, who also love America, are captivated by his love song, even if he sings it off key.

Many of those voices that have warned of dire consequences should Trump become president have enabled big government. Republican politicians, afraid of their own shadow, the media and the Democrats, have done little to reverse any of this. When former House Speaker John Boehner refers to Sen. Ted Cruz as "Lucifer," it is a case of the pot calling the kettle black. What did Boehner do as speaker, other than cut deals with Sens. Harry Reid and Ted Kennedy and kiss former Speaker Nancy Pelosi on the cheek as she handed him the gavel? She must have instinctively known that Boehner wasn't going to rock the boat and would do little damage to the Democratic agenda until the day that party would return to the majority and members resume their former ways.

Voters gave Republicans a majority in both houses of Congress and they did almost nothing with it. It is why Boehner was ousted by conservative members of his own party.

Don't you have a right to be angry if you love America, if you served in the military or have relatives who did, as I have and did? The anger is bipartisan, as the popularity of the socialist Sen. Bernie Sanders (I-VT) attests.

This lyric from the British punk rock group Dead Swans might help explain the country's mood: "You're lying to yourself, just like you always have, the words you said never meant a thing, I could see it from the start, you just want attention, absent friends and enemies are all that's left in your life, every day is like a knife cutting through your chest, constant frustration, you choked on the best years of your life, no love, no hate, no hope, all lies."