The Race to Riot on College Campuses 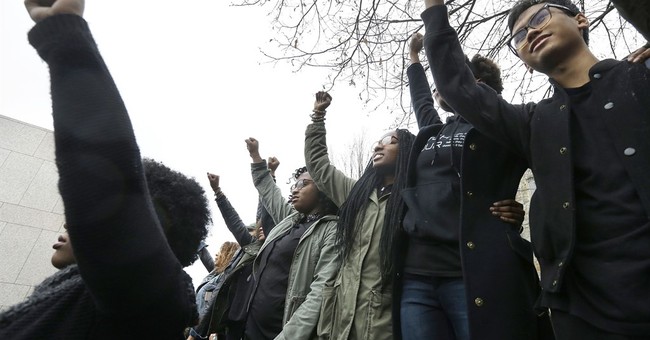 College campuses are again in turmoil. According to The New York Times, "Racist, sexist and anti-Semitic incidents on and near college campuses from Dartmouth to Wisconsin to Stanford this fall have provoked worries by education and civil rights leaders that such acts are on the increase."

That wasn't a story in yesterday's newspaper. That was a story in the Times edition of October 31, 1988. Most campuses where these incidents occurred were noted for their liberalism. They included such bastions of feminism as Smith and Wellesley colleges, Amherst and Mount Holyoke, as well as Yale and Dartmouth and even what many regard as ground zero of liberal academia, The University of Wisconsin at Madison.

In light of recent protests at the University of Missouri and other campuses, it is amusing to read what some believed to be the cause of similar unrest in 1988. Harvard Law School professor Derrick Bell blamed the Reagan administration. Bell claimed that Reagan had disengaged the federal government from civil rights causes and that Vice President George H.W. Bush's campaign ad about Willie Horton, an African-American Massachusetts prisoner who raped a white woman while on a weekend furlough, was also a contributing factor to racial fears. Bell must have forgotten that it was Al Gore who first raised the issue of furloughs for convicted felons in a debate with then-Massachusetts governor and presidential candidate Michael Dukakis.

So if Reagan and Bush were to blame then, who is to blame now for a repeat of the racial conflict on some college campuses? The left isn't blaming the first African-American president, though he has done very little to substantially improve conditions for poor African-Americans.

How about blaming the spoiled fruit of liberalism? The president and chancellor at the University of Missouri abruptly resigned when a group of mostly black students protested that they had not said or done enough in response to racial slights on campus. We're hearing students speak of the need for "safe zones" and against "microaggression," a term with which I have only recently become familiar.

Several points about all of this. First, the leadership at the University of Missouri didn't lead at all. They cut and ran. To put a twist on a cliche, it isn't about the inmates taking over the asylum; rather it is about the children taking over the daycare center. Students should be more concerned with the falling value of their degrees and the poor job market for college graduates than causes that will not help them after graduation. No employer will be asking for their protest resumes.

There will always be racists, bigots and intolerant people among us, though it could be argued that liberals are the least tolerant of all when it comes to ideas and policies with which they disagree. The response to stupidity is education, not a fascist-like approach as we saw when a Mizzou "professor" asked for "muscle" to remove a journalist from covering a demonstration. Are certain people more interested in scoring political points, or solving a problem?

Over several decades incidents of discrimination against conservative students, faculty and even speakers have been well documented. Invitations have been withdrawn, speakers booed, censorship imposed on too many campuses, which are supposed to be oases of tolerance, pluralism and academic freedom.

When a student expresses a racial or religious slur, instead of being condemned, that student should be invited to dinner with people whom they have maligned and required to listen to their stories and the hurt they are causing by their words. Conversation is better than forced silence. Isolation, punishment and expulsion can deepen bigotry, not cure it.