Free Speech Not So Free When Discussing Gay Rights 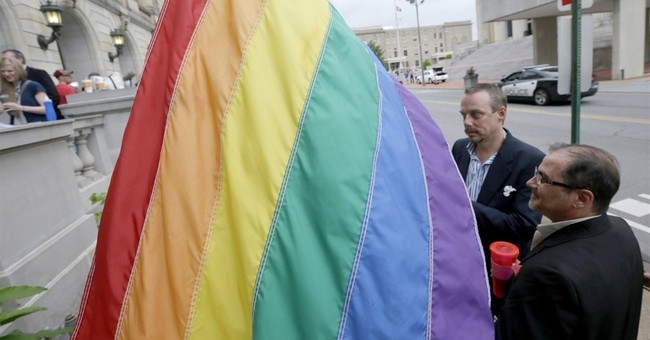 Once, Social Security was the "third rail" of politics. Touch it and face political death. Now it is homosexuality. Criticize anything gay people do and you risk ostracism, fines, suspension or loss of your livelihood.

Michael Sam, the first openly gay player to be drafted by a National Football League team -- the St. Louis Rams picked him 249th in the last round -- is being treated by the media and those in the gay rights movement as the equivalent of an early American pioneer.

Miami Dolphins safety Don Jones, apparently, didn't get the memo. Jones tweeted "OMG" and "horrible" after he saw Sam and his boyfriend kiss each other live on ESPN. His tweet was quickly taken down, but the political correctness police swooped in anyway. Jones has been fined and suspended. He's also being forced to attend "educational training" to get his "mind right," to borrow a phrase from the film "Cool Hand Luke." This sounds like the old communist "re-education" camps.

Dolphins Coach Joe Philbin called Jones' comment "inappropriate and unacceptable." Jones issued a statement that read like it had been written by a lawyer, apologizing for his "inappropriate" tweet and taking "full responsibility" for his comment.

How quickly things have changed from the recent experiences of Tim Tebow. When the quarterback heroically led the Denver Broncos to a playoff victory in 2012 and dropped to one knee, as he often did to express gratitude to God (a move that quickly became known as "Tebowing," which spawned countless YouTube parodies), he was widely ridiculed by many of the same entities that now defend Michael Sam, including some NFL players and even "Saturday Night Live," which in a skit had "Jesus" offering Tebow advice while sitting next to him on a locker room bench.

When the Broncos released Tebow, he was mocked again, not only for his faith, but for claiming to be a virgin who wanted to save himself for marriage. In an increasingly secular and licentious culture this sort of thinking and expression, apparently, must be silenced.

During Tebow's brief professional career, TV ratings spiked, jerseys and other gear with Tebow's name on it sold well and, according to Ad Age, "In terms of influence, Mr. Tebow is now in the top 40 of 3,000 celebs ... on par with Tom Hanks, Lady Gaga, Taylor Swift, Jennifer Aniston and Steven Spielberg."

Yet, Tebow endured a sometimes silent and often shouted campaign to brand him in a negative way. He was called "polarizing." It was said he had "baggage," though his "bags" were considerably lighter than many other professional athletes who have had drug and alcohol problems, incidents with guns at strip clubs and numerous out-of-wedlock children.

The Nation's Dave Zirin revealed the secular left's real problem with Tebow when he wrote, "(Tebow) is a religious figure in a country that is uncomfortable talking (about) religion." Really? I would venture to guess there are probably more people attending church on Sunday mornings than attend NFL football games on Sunday afternoon. Such is the bias of those who hold disdain for people of strong faith because it apparently exposes flaws in themselves they prefer not to see.

"Awwwww. I bet this makes the Baby Jesus weep. Tim should have prayed more."

"Hey Tim, are you getting the message now? Nothing fails like prayer."

"We're all going to h--l and we're excited about it. Don't be jealous."

"Where is your God now, Tebow?"

NFL players who joined in the mockery were not fined, disciplined or forced into education training camp. Such is the cultural double standard between the way Michael Sam is being treated and the experience of Tim Tebow. But what should one expect these days when anything goes, except for free speech critical of the LGBT crowd?