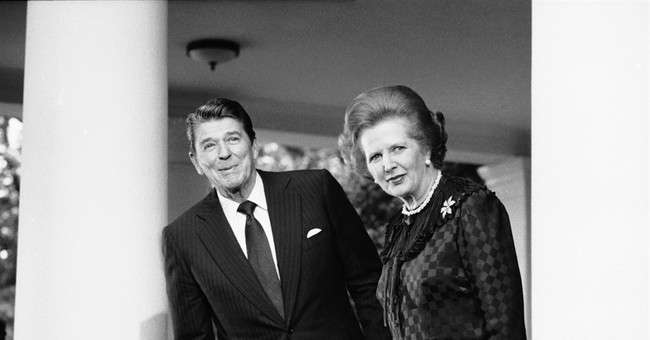 "Bye Bye Birdie" is an old musical that survives in high school productions and in some people's memory bank. It debuted on Broadway in 1960 and was made into a film in 1963. One of the songs from the show might serve as an inspiration, if not a theme, for Republicans in the winter of their discontent over President Obama and congressional Democrats: "Put on a Happy Face."

A problem Republicans have had since the "glory days" of Ronald Reagan is that too many have forgotten how to be positive and affirming. Nobody likes to be around a sourpuss.

Polls indicate that a growing number of us are tired of President Obama's nonstop TV appearances and his view that government is our nanny and will take care of everyone, except the rich and successful, who must be punished for being rich and successful with higher taxes and more regulations.

John F. Kennedy struck the right note in his 1960 presidential campaign. "We can do better," he said. While he was critical of the policies of President Eisenhower and Vice President Richard Nixon, Kennedy focused mostly on the future.

Americans are aware of the problems. They want to be told how they can best be solved. They also remember there was a time when we did better.

This was the true spirit of Ronald Reagan, whom Republicans like to identify with, but too many don't emulate. Consider Reagan's perfectly crafted State of the Union Address on Jan. 25, 1984. Reagan first recalled the recent past:

"As we came to the decade of the '80s, we faced the worst crisis in our postwar history. In the '70s were years of rising problems and falling confidence. There was a feeling government had grown beyond the consent of the governed. Families felt helpless in the face of mounting inflation and the indignity of taxes that reduced reward for hard work, thrift, and risk-taking. All this was overlaid by an ever-growing web of rules and regulations."

"On the international scene, we had an uncomfortable feeling that we'd lost the respect of friend and foe. Some questioned whether we had the will to defend peace and freedom."

Then came the pivot. Having reminded voters of the problem, Reagan reached deep into America's soul, tapping into a blocked vein of optimism:

"But America is too great for small dreams. There was a hunger in the land for a spiritual revival, if you will, a crusade for renewal. The American people said: 'Let us look to the future with confidence, both at home and abroad. Let us give freedom a chance.'"

"Americans were ready to make a new beginning...."

Too great for small dreams. What an inspirational line. Reagan believed the strength of America was not in Washington, but in the people. If the people can catch that larger vision, he believed, they could fulfill their greater dreams.

This is what too many Republicans seem to have forgotten. They debate the size and cost of government, but ignore the one thing that will reduce that size and cost more than anything else: self-reliance. To paraphrase that famous line from Kennedy's inaugural address: Ask not what your country can do for you, ask what you can do for yourself.

Liberty isn't just a word that ought to be applied to governmental structures. Liberty is mainly individual: liberty from debt; liberty from dependence on others; liberty to make personal choices and not be dictated to by government.

Got it, GOP? Altogether now:

"Take off the gloomy mask of tragedy,

It's not your style;

You'll look so good that you'll be glad

Ya' decided to smile!"

An added benefit is that Democrats will wonder what you're up to.