How to Spell Success 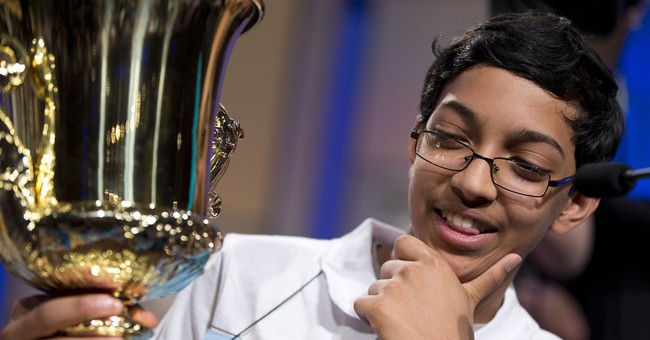 The annual ritual known as the Scripps National Spelling Bee came and went last week with kids spelling words that, I suspect, many with graduate degrees couldn't spell.

The winner was Arvind Mahankali, a 13-year-old eighth-grader from Bayside Hills, N.Y. Mahankali is the first boy to win the title since 2008.

There is a lesson to be learned from the success of these young people, including the ones who came close to winning but didn't. It is the value of persistence. Mahankali won this year by spelling the German word "knaidel." He lost the bee three times before and was eliminated from competition in 2011 and 2012 on German-derived words. Recognizing his weakness, Mahankali repaired his deficit. And his strategy succeeded.

History teaches the value of persistence. Abraham Lincoln lost several elections before winning the 1860 presidential race. He never gave up. Inventors of the telephone, airplane and motorcar refused to quit after repeated failures. Regardless of one's background or circumstances, persistence can make any life better.

My favorite lesson on persistence comes from a 2006 film called "Akeelah and the Bee."

The movie is about an 11-year-old girl (wonderfully played by Keke Palmer). Akeelah attends a middle school in the Crenshaw area of Los Angeles. The school is a failure factory and so devoid of resources it can't afford doors on bathroom stalls. Akeelah's father was murdered; her mother (played by Angela Bassett), works as a nurse and struggles to raise her daughter and Akeelah's brother, who keeps company with neighborhood hoodlums.

Akeelah has a gift for spelling. The school's principal introduces her to a spelling coach, brilliantly played by Laurence Fishburne. Akeelah wins her school's spelling bee and goes on to the next level, pitting her against children unlike herself and forcing her into an unfamiliar world. Many of Akeelah's friends accuse her of being a "brainiac" which, along with the charge of "acting white," discourages her from achieving her true potential.

Akeelah persists and, in the end, triumphs. The route she takes to get there is part of the incredible story. I've seen the film five times and tear up each time I watch it. It's about overcoming, not settling.

Unfortunately, this film and the participants in the real-life spelling bee represent a disappearing America. We don't want to persevere. We seldom teach it to our young. Persistence takes far too long. Instead, too many envy what others have and believe that the successful "owe" the unsuccessful. Far too many promote a culture that values greed and excess. Hard work, personal responsibility and persistence are vanishing faster than integrity in Washington.

And many politicians like it that way. They encourage government dependency because it sustains their careers. The more they're thought to be needed, the likelier they are to be re-elected. We appear to have moved from "you can do it for yourself" to "you can't do it without us" -- "us" being the federal government.

A new Quinnipiac University Poll found that "only 3 percent of voters trust the federal government to do the right thing almost all the time, while 12 percent say they trust it most of the time; 47 percent say some of the time and 36 percent hardly ever." That's hardly a glowing endorsement.

Big government has become a modern "false god." We bow in its direction while ignoring evidence it is incapable of responding to our worship. The coming "train wreck" of Obamacare -- Sen. Max Baucus' (D-Mont.) words, not mine -- will be the next example.

It is only when we rediscover ancient virtues and apply them to today that we will see much more of the type of success experienced by Arvind Mahankali and others like him. He, not the latest video game or teen idol, should be the next generation's role model.