The President and the Republicans 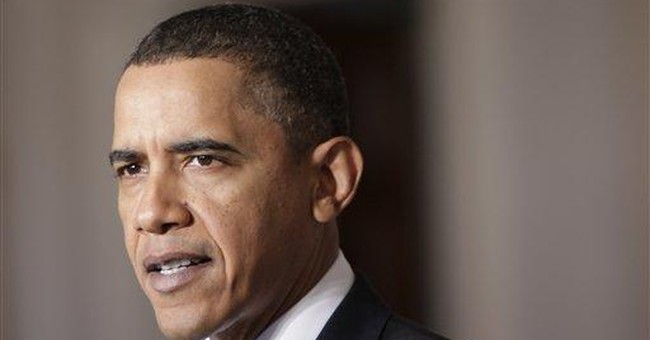 President Obama was right to converse with congressional Republicans last Friday in Baltimore. Cynics may label it as political theater, but I suspect the public appreciated the give-and-take.

The president was given a 26-page booklet containing Republican ideas on the economy, jobs, energy and national security. That should put to rest the fiction that Republicans have presented no ideas on these and other subjects. If the president wants to demonstrate he is seeking common ground instead of scorched earth with Republicans, he might embrace at least one Republican idea and prod his party's congressional majority to go along.

"I am not an ideologue," the president claimed, but of course he is. Dictionary.com defines "ideologue" as "a person who zealously advocates an ideology." President Obama is a self-described "progressive." A progressive is a throwback to the early 20th century. Progressives believe in an intellectual hierarchy that gets to decide what is best for the "uninformed" masses. They use government to impose their worldview on others. Progressives generally seek ways around the Constitution and its philosophical foundation, the Declaration of Independence, because they see these documents as impediments to their objectives. Note Speaker Nancy Pelosi's comment to the press about comprehensive health insurance reform: "We will go through the gate. If the gate is closed, we will go over the fence. If the fence is too high, we will pole vault in. If that doesn't work, we will parachute in." Damn the Constitution; damn the people. That's the attitude of progressives.

Progressives use the tax code to enforce their utilitarian view of the world. They believe that if I make more money than others, I "owe" the others. The president illustrated this in response to a question from Indiana Rep. Mike Pence, who proposed across-the-board tax cuts to spur economic growth. The president responded, "What you may consider across-the-board tax cuts could be, for example, greater cuts for people who are making a billion dollars. I may not agree to a tax cut for Warren Buffett."

Here we have one of the chasms between liberal progressives (some of whom are Republicans) and conservatives. Rather than encourage people to emulate the principles that made Warren Buffett successful, progressives want to punish success and redistribute wealth. Another president during the progressive era would have none of that. Calvin Coolidge said, "The wise and correct course to follow in taxation is not to destroy those who have already secured success, but to create conditions under which everyone will have a better chance to be successful."

President Obama doesn't think this way. He doesn't see government as a last resort, preserving liberty in order that citizens might rise to whatever level their character, education, talent and persistence permit. Rather, he sees the needy as the norm and the wealthy as a source of income for his and his fellow progressive's expensive and unworkable agenda.

A real debate about who is best equipped to solve those problems (and what created them) is what the country needs. The public wants to hear competing ideas discussed in a civil, if spirited, way. We are fellow citizens, after all, not each other's enemies. There are forces that wish to destroy us. We shouldn't help them by destroying ourselves with partisan bickering that does not serve the interests of the country.

President Obama promised to continue the public dialogue. He should. It's good for him, for the Republicans and for the country.