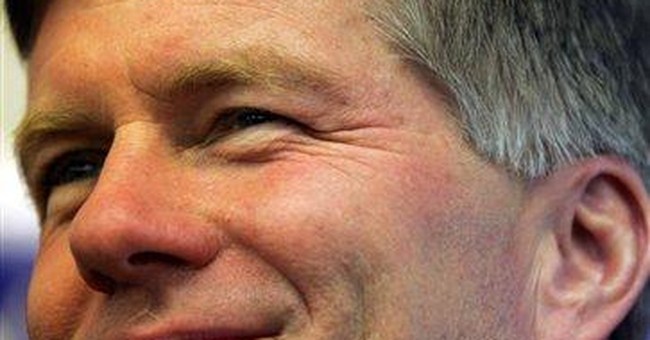 RICHMOND, Va. -- After several weeks of heavy snow and sub-freezing temperatures, the sun came out and the snow began to melt in Richmond last Saturday for the inauguration of Republican Bob McDonnell as Virginia's new governor.

There were more minorities among the estimated 5,000 who attended than I have seen at any recent GOP function. The tone was different, too. Boxes were placed at entrances, inviting donations to the Federation of Virginia Food Banks. There were several references to the earthquake in Haiti and calls for donations to relief efforts there.

McDonnell is not a stereotypical Republican. Should he be labeled a truly compassionate conservative? The Wednesday before his inauguration, McDonnell joined volunteers at the Central Virginia Foodbank and packed food for the needy. The next day, he visited Carpenter's Shelter in Alexandria, a homeless shelter in Northern Virginia, and then Henrico County's Regional Jail East in New Kent County. Such places are not known for harboring pro-Republican sentiment.

Virginia Supreme Court Justice Barbara Milano Keenan, who swore in McDonnell, was the first woman to swear in a Virginia governor. President Obama has nominated her for a seat on the United States Court of Appeals for the Fourth Circuit. McDonnell pledged to work with President Obama to expand charter schools and performance pay for outstanding teachers. Some Democrats are giving the new governor initial high marks for his attitude toward them. The contrast between how McDonnell treats Democrats and congressional Democrats treat Republicans is stark.

In his inaugural address, McDonnell hit notes conservative Republicans want to hear. He pledged to build "A Commonwealth of Opportunity" and if this sounds a little like former President George W. Bush's "Ownership Society," that's OK. He compassionately reached out to the "tens of thousands of our family members, friends and neighbors who have lost their jobs" and those who "worry they could be next;" but conservatively added the means to the end of creating more jobs is not more government, but less: "...we will reduce burdensome taxation and regulation that impede job creation."

In what ought to be manna for conservatives following eight years of Democratic rule in Virginia and Democratic control of the White House and Congress, McDonnell said, "The circumstances of our time demand that we reconsider and restore the proper role of government. Without reform the continued growth of government threatens our very prosperity."

Unlike some conservatives of the recent past, McDonnell does not come off as anti-government. He simply wants government to do what it is supposed to do and leave the rest to its citizens. He explained his reasoning: "We must properly fund the core principles of government, but -- equally important -- we must utilize innovation, privatization and consolidations to deliver government services more effectively." This sounds like what Margaret Thatcher did in England and Ronald Reagan partially achieved in the United States.

McDonnell appeared to rebuke the philosophy of too many liberal Democrats that government should be primary and the individual secondary when he said, "...as we enact these reforms we must remember this: that government cannot guarantee individual outcomes, but equality of opportunity must be guaranteed for all."

There were more pledges, including one to make Virginia "the energy capital of the East Coast" by pursuing new energy technologies, as well as responsible offshore drilling for new oil resources.

Unlike some politicians, McDonnell has a core philosophy, summed up in this paragraph from his address: "The Founders' capstone on the Constitution is the Bill of Rights. No federal mandate nor program crafted by either political party should undermine the central principle of federalism, enshrined in the birth certificate of America by those who pledged their lives, fortunes and sacred honor."

Governor McDonnell's attitude, philosophy and ideas can be the foundation of a renewed Republican Party. If he succeeds, he will be a powerful force within the party and a strong contender for higher office where he might do for the country what he seeks to do for Virginia, the home of eight presidents ... so far.