How to Create Jobs Without Really Trying 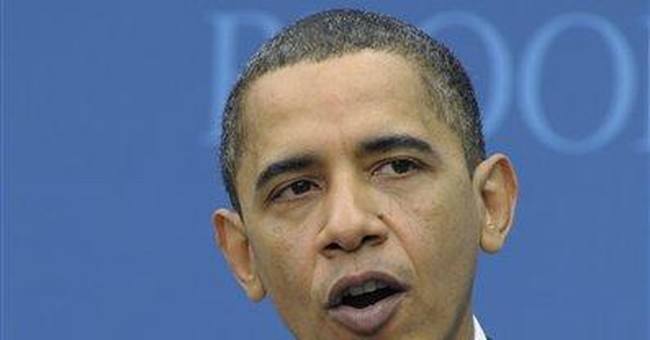 In 1952, Shepherd Mead wrote a little book called "How to Succeed in Business Without Really Trying." In 1961, it became an award-winning Broadway musical. It's an instruction book about how a young man with lots of drive and cunning can rise from the mailroom to the top of the company. One of the songs from the musical, sung by the main character, J. Pierrepont Finch, is "I Believe in You." Finch sings it to a mirror.

Today that song might be re-titled "I Believe in Government."

President Obama delivered his latest speech on job creation and the economy Tuesday at the liberal Brookings Institution in Washington. As with all of his speeches, this one was loaded with first-person references and blame of the Bush administration for America's economic troubles. Apparently George W. Bush has finally replaced Herbert Hoover as the Democrats' favorite whipping boy.

The president again claimed his "Recovery Act" has "created jobs and spurred growth." He got the "act" part right. The facts tell a different story about recovery.

ABC's Jake Tapper analyzed the administration's claim to have saved one million jobs when that assertion was made at the end of October. Tapper wrote, "The 'majority of funds' came from state governments because (stimulus) distributed the money in block grants to the states. What did the states do with the money? They did save jobs, but primarily bureaucratic jobs. States used the money to temporarily paper over budget gaps which would have forced layoffs of state employees, which should have been a necessary step in slimming down state-level spending."

At Brookings, the president said, "My economic team has been considering a full range of additional ideas to help accelerate the pace of private sector hiring. We held a jobs forum at the White House that brought together business owners, CEOs, union members, economists, folks from nonprofits, and state and local officials to talk about job creation."

He might as well have assembled a group of scientists to discuss how water is made. The combination of two parts hydrogen, one part oxygen is learned in Chemistry 101. The way to create jobs is to allow businesses to make sufficient profits so they can afford to hire more workers and manufacture more "widgets." If businesses must pay more in taxes to government and more in health care costs there will be less profit and fewer employees. Why is that formula so difficult to understand?

Union and state workers don't create jobs. Nether do economists and nonprofits. Nonprofits exist because people and companies have enough money left over to contribute. If the donors are making less they will contribute less and nonprofits, like for-profits, will lay people off, or not hire new employees.

The president also wants to "invest" in infrastructure and "create jobs" by giving people "incentives" to prevent their homes from leaking heat in winter and cool air in summer. Hasn't that been tried in previous administrations? And the president wants to give tax incentives so that employers will hire workers. But the "incentives" are miniscule compared to the salary and benefits it would cost an employer to hire someone. The president would achieve real success by cutting taxes, eliminating unnecessary regulations and liberating the free enterprise system to do what it does best: create products and services people will buy so that companies will hire people.

That has always been the formula that has produced a strong American economy. Government produces little that people want to buy. Government mostly takes from those who produce. Government can spread wealth, as this president is attempting to do -- but it can't create wealth. So by spreading wealth rather than allowing wealth to be created, the result is less wealth to spread.

Why can't liberals understand this? It is because this president and much of his administration have never punched a time clock or run a business.

The economic power of America is in Americans, not in government.

Turley to Senate Dems: Kill the obstruction article to save your case
Hotair
DOJ Responds to Andrew McCabe's Lawsuit and It's an Absolute Beatdown
Redstate