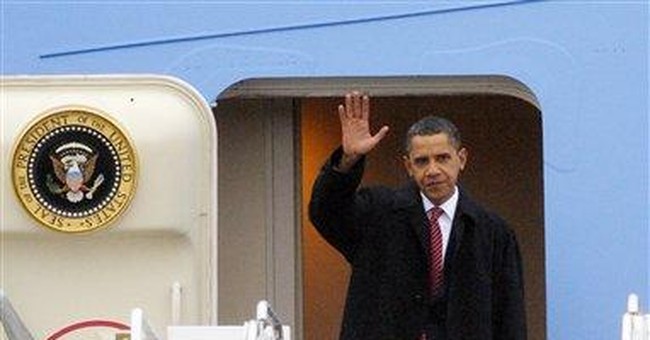 Not all revolutions begin in the streets with tanks and guns. Some advance slowly, almost imperceptibly, until a nation is transformed and the public realizes too late that their freedoms are gone.

Such is the revolution now taking place in America. The '60s crowd has emerged from the ideological grave and is about to impose on this country a declaration of dependence in the form of government-run health insurance and treatment. It matters not what facts are known about this "coup," because to those from the '60s -- whether they lived in that decade or were born later and adopted its ideology -- only feelings and intentions matter, not truth and results.

Why would anyone trust government -- which has a difficult enough time winning wars -- to properly administer health care? What track record does government have in living up to its economic forecasts and competence in running anything?

But this is about none of that. This is about liberal Democrats realizing their decades-old dream of complete control of our lives. Every move you make, every breath you take, they'll be watching you. Except, of course, when it comes to terrorists who want to destroy America faster than the liberals do. A different standard is applied to them.

Nowhere in the debate over health care "reform" have we heard a single word from liberal Democrats about personal responsibility, self-reliance and freedom. In fact, the message has come through quite clearly that government will penalize anyone who demonstrates such beliefs, as it attempts to spread your wealth around.

This is how I see health care reform working: If you are a doctor who has spent a lot of money and time becoming a responsible and caring physician, the government will tell you how much to charge your patients and, in fact, whether you will be allowed to treat them at all. Bureaucrats, having given themselves the power of God, will decide whether a patient is worth the cost of treatment, thereby deciding who lives and who dies. Despite the Stupak-Pitts Amendment, somewhere down the line taxpayers will be forced to underwrite abortions in violation of the consciences and faith of the majority.

This is the triumph of the humanistic, atheistic worldview. We are all to be regarded as products of evolution in which the fit and the powerful will decide our survival and worth.

When Republicans were in the majority, deficits mattered to Democrats. Now we see that expressed concern was a sham, because if deficits meant something when they were relatively small, they ought to mean something more when we are in hock up to the necks of our Chinese-made clothes.

We've only just begun with this. The new breast and ovarian cancer screening guidelines may soon become mandatory as health care rationing kicks in. The unwanted, the inconvenient and the "burdensome" could soon be dispatched with a pill, or through neglect.

Great horrors don't begin in gas chambers, killing fields, or forced famines. They begin when there is a philosophical shift in a nation's leadership about the value of human life. Novelist Walker Percy examined the underlying philosophy that led to the Holocaust and wrote: "In a word, certain consequences, perhaps unforeseen, follow upon the acceptance of the principle of the destruction of human life for what may appear to be the most admirable social reasons."

In our day, the consequences of government seizure of one-sixth of our economy and government's ability to decide how we run our lives (it won't stop with health care) are foreseen. They are just being ignored in our continued pursuit of personal peace, affluence and political power.

Opinion polls show a majority of Americans reject this health care "reform" bill. They think haste may waste them in the end. It doesn't matter. Like members of a cult, whatever the leader says, goes. The facts be damned. The crowd from the '60s will "seize the time," in the words of Black Panther radical Bobby Seale, thus sealing our doom as a unique and wonderful nation.

Welcome to the U.S.S.A., the United Socialist States of America.