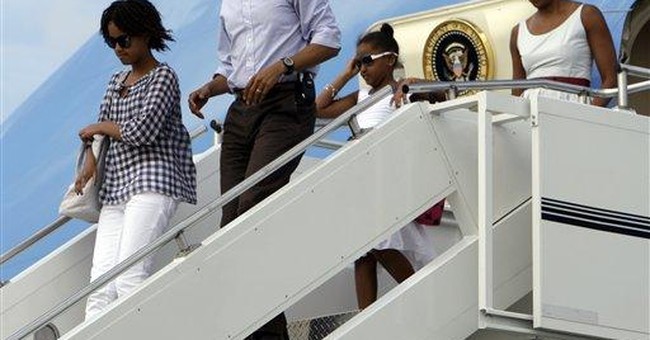 Remember when the deficit was so bad that Democrats said we (or more accurately the Republicans) were placing a terrible burden on our grandchildren?

That was several trillion dollars ago. Democrats now appear perfectly fine with extending the growing deficit and national debt to their great-grandchildren. Perhaps politicians think they will never be held accountable three generations from now because they won't be around to explain to those not yet born why they refused to stop our financial hemorrhaging.

The Obama administration forecast a 10-year budget deficit projection of more than $7.1 trillion, but when confronted with figures from the pesky and bipartisan Congressional Budget Office, the administration was forced this week to raise that projection to approximately $9 trillion. That's $9,000,000,000,000 dollars. For most of us who think a $1,000 deposit in our checking accounts is a large amount and a $1,000 credit card balance is too much, $9 trillion is a figure that is almost beyond comprehension. It is certainly beyond defensible. To borrow a phrase used in another context by the House leadership, it is un-American.

The philosophy of government under both parties can be boiled down to two acronyms: ATM and ASM -- always take more and always spend more.

Who is clamoring for more laws to be passed, more programs to be started and more money to be spent? Let's find him and lock him up for our financial security.

One answer is to be found in a new book by investigative reporter, educator and columnist Martin Gross. Gross summarizes in an easy to read and understandable style how and why government has failed its citizens. The book, to be released Sept. 1, is called "National Suicide: How Washington is Destroying the American Dream from A to Z." In addition to listing some of the more outrageous pork projects that are now well-known to anyone who has been paying attention ($107,000 to study the sex life of the Japanese quail; $150,000 to study the Hatfield-McCoy feud are just two examples on a long list), Gross touches on even bigger and equally outrageous expenditures.

The Alternative Minimum Tax, which he says is "based on an accounting lie," will cost taxpayers $1 trillion over the next 10 years. America, he writes, spends $700 billion a year on various welfare programs, amounting to $65,000 for each poor family of four, yet we still have the poor with us. Both political parties, Gross charges, secretly encourage illegal immigration (the Democrats for votes, the Republicans for cheap labor) and then reward the immigrants' children with automatic U.S. citizenship.

Gross has discovered 1,000 duplicate programs that waste billions. The Bush administration's signature education issue, "No Child Left Behind," has left behind a lot of misspent money: $24 billion per year, according to Gross, even as primary and secondary education "continue to spiral downward."

If you haven't vented enough this summer at your local town hall meeting, this book will keep your blood pressure up and your motivation to do something about overspending high into the next election. Publisher's Weekly wrote in its review: "A fiery A-Z compendium of government greed, chicanery, and plain incompetence. Gross enjoys a good rant, but his criticism are sound and well-supported."

Gross does more than just list government's sins. He offers a solution on "How to Better Govern America." If ever there was a must-read for people who are sick of the way government operates, this is it.