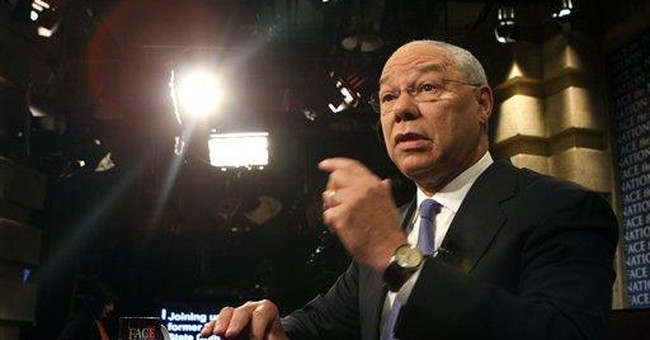 The Republican Party of late has been on a listening tour, asking people for recommendations about what the party should do to revive itself after the last two disastrous election cycles. Former Secretary of State Colin Powell has offered his opinions and in the process may have done more to further divide the party he claims to support.

Appearing last Sunday on CBS's "Face the Nation," Powell said if Republicans "don't reach out more, the party is going to be sitting on a very, very narrow base." Powell said his "model" for this outreach effort is the late Jack Kemp, who he said, "was as conservative as anybody" and "a man who believed in inclusiveness, reaching out to minorities, reaching out to the poor, sharing the wealth."

Kemp did, indeed, believe all those things, but his efforts did not bring enough new voters to the party to make a significant difference. That's because Democrats own "compassion."

A question that host Bob Schieffer should have asked is, "General, you are for more government, abortion and affirmative action. What distinguishes you from Democrats and their positions on these and other issues and if you take the same positions as Democrats, why should people vote Republican?"

Powell said that while he voted for Ronald Reagan twice and the two George Bushes twice, he had also voted for John Kennedy, Lyndon Johnson and Jimmy Carter the first time. But in 1976, Powell's definition of a good Republican, Gerald Ford, ran against Carter. If Powell wanted a Republican who was a practical secularist who seemed unconcerned with big government and who believed that "every state should have a constitutional right to control abortion and ... that such laws need to recognize and provide for exceptional cases," Ford ought to have been his man.

Another question Schieffer should have asked Powell: "Republicans tried your go-along-to-get-along strategy for 40 years in the House of Representatives. They were docile and ready to accept whatever the Democratic majority doled out to them. It was only when Newt Gingrich began contrasting the two parties that Republicans started winning. Aren't you recommending a failed strategy that would again doom Republicans to permanent minority status for the foreseeable future?"

Here's another unasked question: "You think Republicans should go after the Northeast liberal vote and embrace their concerns. But wouldn't that lose them the very Southern vote that has contributed to so many GOP victories in the recent past? How do you win elections when, even if you could win the Northeast, you lose the South?"

Powell had a chance to test his theories by running for president, but in 1995 he announced he would not do so. Powell has never run for elective office. For Republicans to take his advice on how to win elections would be like Powell taking advice from an Army private on battle strategy.

We have two main political parties because there are people who take opposite views on important issues -- from taxes, to the size of government, to abortion to how the Constitution should be read by justices of the Supreme Court, to the best way to defend the country. Candidates win elections by making their case on these issues and persuading a majority of voters that they are right and their opponent is wrong. Parties can't win elections by watering down their positions and accepting into the party those who don't believe in its foundational principles.

Powell's doctrine is a prescription for more Republican losses. The GOP has been declared prematurely dead before in 1964, '76, '92 and 2008. It revives when it remembers its principles, not when it abandons them or pretends they no longer matter in the pursuit of a self-defeating "big tent."