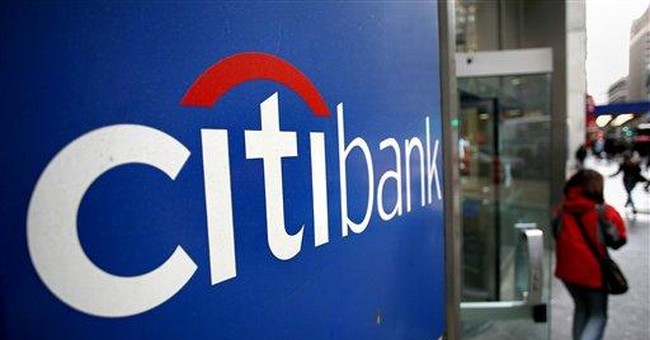 "Always pay the bank" was my father's economic advice. In good times and in bad, whether I had low, moderate or high income, I always paid the bank. The bank now offers me loans.

That fatherly advice, though, was not about making the bankers feel good. He wished to instill in me a sense of responsibility and moral integrity. Dad knew such an attitude would help make for a successful life.

Things are rapidly changing. Once, we honored and encouraged hard work, individual responsibility, integrity and achievement. The fruits of success were our reward. Today, we discourage such things by rewarding failure, mediocrity, incompetence and envy. If one does succeed using the old values, the government imposes penalties of higher taxes and more regulations to subsidize those who won't embrace the virtues that built and sustained the nation through truly hard times.

The financial adviser Ric Edelman said on his syndicated radio show last Saturday that the reason many are panicking during the current recession is because they have only lived in prosperous times. Edelman noted that 30 years ago, just 20 percent of the country was invested in the stock market. Now, he says, about 70 percent of Americans are invested and most have only lived during periods when the market (and home values) always increased.

An economic truism is that you don't raise taxes in a recession, but that's what the Obama administration plans to do. They won't call it a tax increase. They'll let the Bush tax cuts expire, jacking up the top rate to 39 percent again, as it was in the Clinton years, a period in which even Bill Clinton was forced to admit he raised taxes "too much." Who believes government needs more of our money, when it already wastes so much of it?

Do we want to replace this great country with all the opportunities it affords to people who play by the rules, work hard and make right decisions, with a country that doesn't care what rules you live by because government will take care of you? And what does this say about people who have played by the rules? They have paid the bank, but now see people who did not getting a handout from government for their mortgages, as if paying and not paying are morally equivalent.

Each generation must renew the principles delivered by the preceding one. I fear this generation may be dropping the baton, seduced by the flattering words of politicians who promise not to let us fail, or suffer, or even feel bad. That is a fool's bargain because it is through failure (or the threat of it) and suffering that we grow stronger as individuals and become more self-reliant.

For a clue to what liberal politicians are trying to foist on the country, visit http://www.despair.com/viewall.html. There you will find anti-motivational posters, the antithesis of the motivational ones found in Sky Mall magazine. These anti-motivational posters are for people who prefer despair to optimism and see government as their only hope. The posters sell "de-motivation: increasing success by lowering expectations." Of government, it says, "If you think the problems we create are bad, just wait until you see our solutions."

We face a future of ever-bigger and intrusive government and the punishing of achievement unless this generation realizes it has dropped the baton it was handed and returns to pick it up.