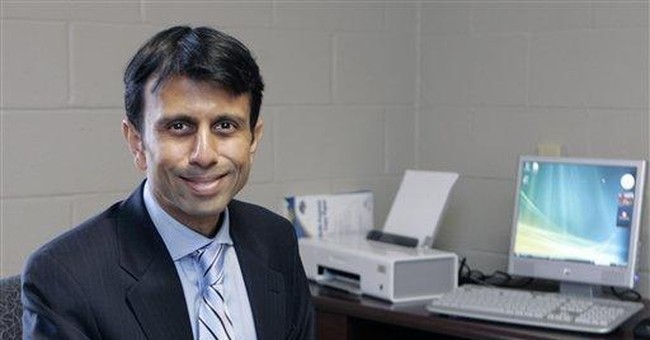 BATON ROUGE, La. -- As a practicing Roman Catholic, Louisiana's Republican governor, Bobby Jindal, knows a lot about repentance and penance. And in an interview last Wednesday at the governor's mansion, Jindal sounded a lot like a preacher listing the sins of a party he hopes will soon see the light.

What lessons should the GOP learn from the last two election cycles? "The party must consistently do what it says," Jindal admonished. "You can't be the party of fiscal discipline and tolerate the kind of spending that our party has accepted in the last several years, especially in Washington. ... If the Democrats had proposed many of the spending initiatives and projects that Republicans ended up approving, we would have been the first to criticize them."

That's a good start, but overspending isn't the only practice Republicans must transform, is it? "We've got to consistently oppose corruption in our own party," said Jindal. "It's not enough to make excuses that 'the other side does it.'"

Right again. Anything else?

"We have to apply our ideas to the problems Americans care about. I oppose greater government intrusion into our lives, but on health care, for example, for too long the Republican answer to this problem has been dumb." Dumb? Did he just say a Republican idea is dumb? Yes, he did. And he admires Sen. Edward Kennedy, Massachusetts Democrat, because, "He is relentless; he is consistent; he knows where he wants to go."

You know the party is in trouble when a Republican uses Ted Kennedy as a political role model.

Calling for the GOP to again be the party of "ideas and solutions," Gov. Jindal said, "Too often the rhetoric from the party has been 'vote for Republicans because the other side is worse'. That doesn't motivate or excite voters. You have to have a positive, proactive agenda for America."

Where did Republicans err after winning the White House and both Houses of Congress? "We went to Washington to change Washington," he said, "but we became a captive of Washington. We were supposed to be the party of outsiders. We became what we were elected to change."

Louisiana is constitutionally required to balance its budget. Jindal claims to be saving $341 million in the state's fiscal '09 budget. "We will continue to pursue policies to move Louisiana forward while we tighten our belts in government and ensure we are living within our means," said Jindal, which, he criticizes, is something Washington is not doing.

Echoing President-elect Obama's pledge in his speech last week at George Mason University, Jindal said, "We are one of eight states that put all of its spending online. We're the only state that links it to performance outcomes. So you can go online and see where your tax dollars are going and you can link it to accountability."

Jindal wishes Obama well: "We should genuinely want him to succeed. Our country is facing not only an economic challenge, but also international threats. ... I want our country to thrive under his administration. Clearly I will have philosophical disagreements with him. He deserves a chance to hit the ground running. He hasn't proposed his first bill. Republicans make a mistake in Congress if they simply go there and say their mission in life is to say 'no' to every proposal. I think we should look for opportunities to work with him. I also think we should be proactive if we don't agree with him and offer (alternative) solutions."

Jindal is a comer, possibly the new face of the GOP. He plans to run for another term in 2011, but won't talk yet about 2012. The GOP leadership had better listen to him. His proposals are the way back for a party that has lost its way.