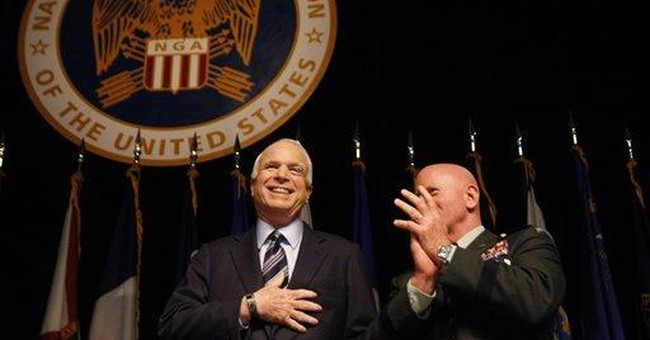 When Senators Barack Obama and John McCain meet Friday in Oxford, Miss., for the first of their three scheduled debates, the TV and radio audience is likely to set a record for such an event. Nearly 40 million Americans watched some, or all, of each political convention and there is no reason for diminished interest in these debates. In fact, the Oct. 2 exchange between vice presidential nominees Sarah Palin and Joe Biden might outdraw McCain and Obama.

The Obama camp is treating Friday like a boxing match. Obama and his advisers have set up a "debate camp" in the Tampa Bay area to sharpen his skills. McCain has not said whether he has a similar training regime, but in a telephone interview Sunday, McCain told me he sees himself as the "underdog" in the face of what he regards as Obama's "extremely talented" speaking and debating skills. McCain added, "I do not have his eloquence, but I certainly believe I have more substance."

McCain's challenge is to expose Obama as naive in his approach to the evils that confront us without appearing condescending. America very much likes the idea of a person of color becoming president, if for no other reason than to serve as partial propitiation for our individual and collective sins against blacks. McCain's job is to project a view that he, too, favors the idea of a black president, just not Obama.

Obama negotiators persuaded the debate commission to choose foreign policy as the first debate topic; apparently thinking it could hang the unpopular President Bush and the Iraq War around McCain's neck. McCain negotiators agreed to the topic switch.

McCain must sell the idea that this war is not limited to a single state, or even two states, but is worldwide, ideological, religious, viral and dangerous. Proponents of radical Islam cannot be negotiated with because there is nothing we have that they want, except our heads. McCain should pound Obama on his immature promise to sit down with the world's dictators and talk to them. Even Hillary Clinton properly ridiculed that notion during the primaries. McCain could sound bite Obama to political death just on Clinton's critique's of him, though that can cut both ways, as much was said against McCain by his Republican challengers.

There may be no bigger nut case on the international scene than Mahmoud ("there are no homosexuals in Iran") Ahmadinejad, who has brought his crackpot opinions to the United Nations this week. Would McCain take military action without congressional approval to destroy any nuclear weapons Iran develops? His answer is both forceful and cautious: "I would make sure every option is explored before I would explore military action (and) I would make sure that if I contemplated that action, I would be in consultation with the leaders of Congress." He said he thinks, "It's very clear that if the Iranians acquire nuclear weapons, it's not only a threat to the state of Israel, but it's also incredibly destabilizing to every (state) in the region."

There is a difference between consultation and seeking authorization for war, as the Constitution mandates, and Obama might score points by pointing that out, though McCain's rejoinder might be that given the toxic polarization in Washington it is less likely he could count on a Democratic Congress to make an apolitical decision.

What about his running mate, who has been stingy with interviews and other media exposure since her selection, is she getting a crash course in foreign policy prior to the Oct. 2 vice presidential debate? McCain laughs and then expresses confidence in "Sarah": "Joe Biden is very experienced and very knowledgeable. The difference is in their worldviews. Joe Biden wanted to divide Iraq into three different countries, clearly an unworkable solution. Joe Biden thinks it's patriotic to raise people's taxes. That's different from my definition and Sarah's definition of patriotism. I think Sarah will more than hold her own because she has the right grounding ideals and worldview. She also understands far better than Joe Biden one of our outstanding national security challenges and that is energy."

The New York Times reported Sunday that the Obama camp is looking for ways to make McCain angry. That could backfire, especially if he gets angry for the right reason (as Reagan did in New Hampshire in 1980. "I paid for this microphone.").

In Friday's debate, I'm going with McCain on substance; Obama on eloquence and I hope that many of those who have virtually worshipped Obama will see the real light.