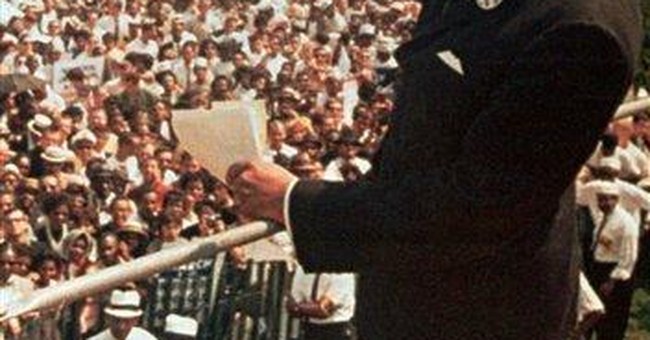 Then there was the assassination of Dr. Martin Luther King Jr. 40 years ago, April 4. I was a young man having dinner with an old man at an upscale private club in Atlanta. When the news came in, it was whispered from table to table. There were shocked murmurs, heads shook.

That night I caught the last flight from Atlanta to Washington. As the plane began to descend toward National Airport, I saw the city of my birth in flames. Our nation's capital looked like Berlin after the bombings of World War II.

National Guardsmen were called out, one of them my brother-in-law. People believed a race war had begun. It was a scary, sobering time. An apostate of hate had killed the apostle of nonviolence.

Much has been written and spoken of that horrible day 40 years ago. Much more will be written and spoken in decades to come. King is as much a part of American history as is Abraham Lincoln. Why do evil men so often take from us those who seek to do good?

For years what became known as the "riot corridor," three Washington-area thoroughfares ravaged by looting and arson in 1968, languished in decay. The Nixon administration demonstrated little interest in seeing the corridor rebuilt. Washington was (and is) a one-party town and Nixon's "Southern strategy" sought white votes, not black ones. No business wanted to set up shop in areas so recently destroyed by vandals.

Yes, some of the rioters were criminals looking for an excuse to rob and loot. Others allowed their despair to overcome good judgment, burning their neighborhoods and thrusting themselves further down the ladder of success.

Dr. King would not recognize modern Washington. It still has its deep pockets of poverty, but today's capital city is vibrant and optimistic. A brand-new baseball stadium just opened and the hope is that it will contribute economic revitalization to a part of the city where prosperity has been a stranger.

People who don't read history or weren't alive during the King era may have forgotten, or never knew, of the character assassinations made against him. Some white preachers claimed he kept company with communists. Others appealed to the most virulent forms of racism, suggesting that if black men gained their "endowed unalienable rights" they might marry white women, thus "polluting" the gene pool. To younger people, this may sound like fiction. Those who lived through it, especially black people (who were called "negroes" on a good day) know it as fact.

It was in this environment that Dr. King lived, preached and worked. It is easy to bask in his glow four decades after his death. It took incredible bravery at the time to walk with him in support of his cause. And it wasn't only his cause. It was an American cause. He challenged this country to live up to its ideals and what he knew was its better nature, if it could escape from behind the barricade of prejudice and ignorance.

He said, "I refuse to accept the view that mankind is so tragically bound to the starless midnight of racism and war that the bright daybreak of peace and brotherhood can never become a reality I believe that unarmed truth and unconditional love will have the final word."

Two months after King's murder, Robert F. Kennedy was assassinated. Kennedy echoed King when he said, "Each time a man stands up for an ideal, or acts to improve the lot of others, or strikes out against injustice, he sends forth a tiny ripple of hope."

King sent out more than a ripple of hope, he sent out a flood. Without him there might not have been a civil rights movement, at least not one as effective in breaking the chains of injustice. That's a legacy that should make all Americans proud. That's why King deserves more than a national holiday. In what he said about race and brotherhood, he deserves to be followed.