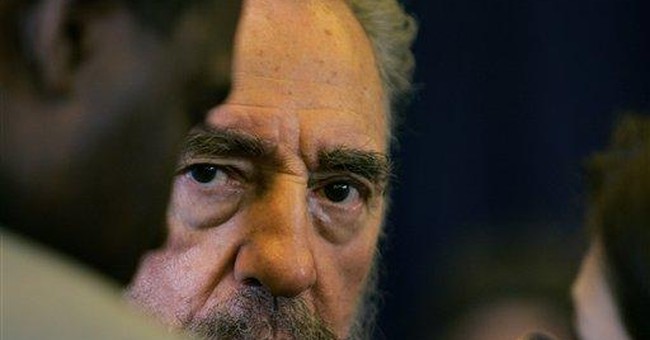 The Left's favorite dictator, Fidel Castro, is "resigning" as Cuba's president of the Council of State. Sen. Mel Martinez (R-FL), who was born in Cuba and, at the age of 15, along with his brother, was evacuated from Cuba during Operation Pedro Pan, observed: "Castro has resigned from a position he was never elected to in the first place."

The Hollywood Left, including Steven Spielberg, Jack Nicholson, Naomi Campbell, Chevy Chase, Danny Glover and Oliver Stone, among others, has treated Castro as a reformer. Various idiocies have poured from their lips, praising Castro for supposed excellence in health care and education. According to Chase, "Socialism works; Cuba might prove that." Says Campbell, Castro is "a source of inspiration to the world." Nicholson declared Castro "a genius." These are the leftists who denounce their own country for alleged human rights abuses at Guantanamo and elsewhere, but travel to communist Cuba and return gushing praise and sounding as if they had just returned from the healing waters at Lourdes.

While human rights advocates rot in Cuban jails, or are executed, leftists around the world perform the political equivalent of dancing on their graves. Castro's nearly 50-year tenure in power is not the result of the love and support he received from those Cubans unable to escape, but rather a consequence of his ruthlessness in imprisoning or killing anyone who opposed him. As the Soviet Union began to sink, Mikhail Gorbachev issued the equivalent of a "save yourself" warning to Castro, urging him to follow Gorbachev's lead and adopt perestroika and glasnost. Castro would have none of it. He responded: "openness and reform are dangerous and represent a threat to fundamental socialist principles."

The United States had a hand in creating Castro because of its support for his predecessor, Fulgencio Batista. When Batista seized power in 1952, the United States mostly turned away. Six years later, America ceased arms sales to Batista when his brutality became too obvious to ignore. By then, Castro was already radicalized and plotting his armed overthrow of Batista's regime.

The Cuban Missile Crisis in 1962, when Castro allowed Soviet missiles to be established in Cuba, has been well documented. The United States nearly went to nuclear war with the Soviet Union before Premier Nikita Khrushchev backed down from his showdown with President Kennedy and withdrew the missiles. Castro followed with revolution on the installment plan, supporting communist insurgents in Nicaragua, El Salvador and more recently, Venezuela and Bolivia.

In the reams of fiction generated from within and outside Cuba, probably none equals the supposed "excellent" healthcare system on the island. It is true that some good health care is available, but only for the elite who can pay for it with hard cash and for the communist hierarchy and military commanders. Everyone else is forced to take what little he or she can get.

Liberals blame the American economic blockade of Cuba for its economic woes and substandard health care for ordinary Cubans. The Cuban American National Foundation interviewed a group of Cuban doctors who had managed to get out of Cuba and come to the United States. They told the organization they were "mystified" by claims in a report from the American Association for World Health blaming the U.S. embargo for Cuba's health care struggles. According to the Cuban doctors, "we . . . can categorically and authoritatively state that our people's poor health care situation results from a dysfunctional and inhumane economic and political system, exacerbated by the regime to divert scarce resources to meet the needs of the regime's elite and foreign patients who bring hard currency."

Castro's brother, Raoul, has been handed the reins (or in this case chains) of power, so little is likely to change in the near future. However, if President Bush is right about all people wanting freedom, then the ultimate collapse of communism in Cuba is as certain as its collapse in Eastern Europe. The question is what comes next and will the United States learn from its previous mistakes in dealing with Cuba, or will it repeat them, causing further damage to U.S. interests in Latin America? One hopes history will not repeat.

The best thing that could happen in Cuba is for the regime to collapse. Then, properly restored, Cuba could become an engine for democracy that, instead of fueling revolution throughout Latin America, would be part of what President Kennedy called an Alliance for Progress that would promote economic growth and human freedom throughout the region.