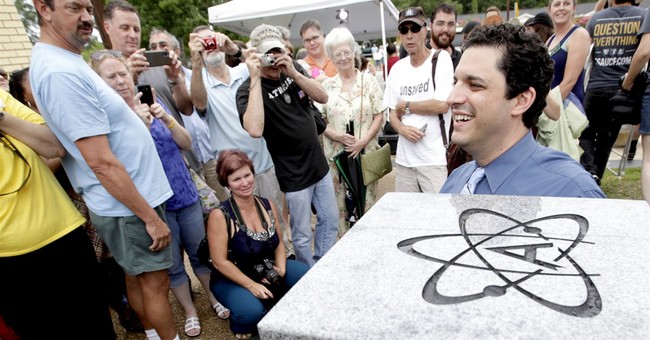 On July 23, a bipartisan majority of the House

What is surprising is that prominent humanists like Jason Heap would apply to be chaplains.

As a humanist, Heap does not recognize the existence of God or the truth of any religion. He has admitted to only being able to engage a member of the armed forces on a “philosophical” non-religious level, and that he would not be able to lead a person in prayer on the eve of battle or when dying on the field—presumably because he does not believe that anyone exists to pray to.

Current chaplains, however, can and do engage and assist the philosophical and moral needs of the estimated 0.67 percent of the military that self-identify as atheist or agnostic. As U. S. Representative and Air Force Chaplain Doug Collins noted during the brief

… if a chaplain is doing their job right, then all feel welcome. When I was in Iraq, I would go across and see everyone at night. I had many times those who profess no faith at all who would come to me and say, “Chaplain, I don’t believe there is a God, but I have a wife at home that I’m having trouble with. Can you talk to me?” That’s what a chaplain does.

If a religious service member, however, asks an “atheist chaplain” to pray for him, the “chaplain” can’t.

The primary job description of a chaplain involves religious duties. Whether it’s conducting religious services or providing advice pertaining to an individual’s religion, an atheist “chaplain” cannot fulfill those roles, and atheist members would, presumably, not desire those services. An atheist could only partially fulfill secondary chaplain roles, such as informal counsel, moral guidance, and comfort in battle (e.g., atheist chaplain applicant Mr. Heap would not pray for a dying soldier). A chaplain, however, can certainly meet those needs.

Thus the current chaplaincy offers these non-religious services on the same basis to armed forces members of any faith or no faith at all. An atheist “chaplain,” however, simply cannot offer the religious services required of a chaplain anymore than a square can declare itself to be circle.