After Court Argument, Seething Frustration on the Left

Byron York
|
Posted: Dec 08, 2021 12:01 AM
Share   Tweet
The opinions expressed by columnists are their own and do not necessarily represent the views of Townhall.com. 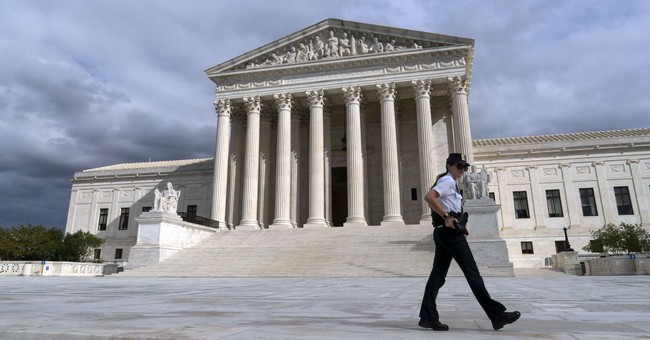 One theme of Democratic control of Washington has been frustration, especially among the party's progressive wing and its cheerleaders in the media, that Democrats have not been able to enact their progressive dream agenda from the 2020 campaign. Dreams such as nationalizing the administration of elections in ways favorable to Democratic candidates, packing the Supreme Court and eliminating the Senate filibuster.

Now, after Wednesday's abortion arguments before the Supreme Court, that frustration is mounting. The court has a 6-3 Republican-appointed majority that might overturn Roe v. Wade. How, some Democrats ask, could that have been allowed to happen?

But Democrats see a crisis, now playing out in the abortion case. "This week's Supreme Court argument on abortion has accelerated an urgency among Senate Democrats to fundamentally alter how the court operates," The Washington Post reported last week, "fueled in part by lingering anger over Republican confirmation maneuvers that have led to three new conservative justices in the past four years."

The thinking among those Democrats is that if the court does something they oppose, it has become "partisan." Now, they need to intervene to make it less "partisan."

"It is hard to watch [the abortion argument] and not conclude that the court has become a partisan institution," Democratic Sen. Brian Schatz of Hawaii told the Post.

"We've got to think about ways to sort of depoliticize the courts," said Democratic Sen. Chris Murphy of Connecticut. "And one of the ways to do that is to make sure that no one president gets to stack the bench."

Media allies stepped in to argue the court is an antidemocratic institution. The Washington Post's Philip Bump called Trump's three nominees -- Gorsuch, Kavanaugh and Barrett -- the "minoritarian third" of the Supreme Court. "The three [were] nominated by a president who lost the popular vote and confirmed by senators representing less of the country's population and who had received fewer cumulative votes than those who opposed the nominations," Bump wrote. In the words of another Washington Post opinion writer, "The Supreme Court faces an existential crisis of legitimacy."

The arguments were made by others all across the internet and cable news -- and even, astonishingly, inside the court itself, when during the abortion argument, Justice Sonia Sotomayor said, "Will this institution survive the stench that this creates in the public perception that the Constitution and its reading are just political acts?"

The idea for progressive Democrats is to undermine the legitimacy of anything the current Supreme Court does and then argue that the court needs "reform" in the form of more members appointed by a Democratic president.

Democrats have certainly had bad luck lately when it comes to the Supreme Court. If Scalia had died a year earlier, or if Ginsburg had died just a few months later, things might have been much different for the party, and some of its lawmakers might not support blowing up the court today.

As far as having the power to blow up the court is concerned, it should be noted that Democrats do not control a majority of seats in the Senate -- it is tied, 50-50, meaning the party depends on Vice President Kamala Harris to break any tie votes. That's not the kind of majority that can muscle through a huge change in the court. And that has, of course, led some of those same Democrats to urge getting rid of the legislative filibuster, by which Republicans (and some in their own party, too) can block them from packing the court. The progressives are eager to fundamentally alter the Supreme Court on the basis of a 50-50 tie vote broken in the Democrats' favor by the vice president.

But that doesn't appear likely to happen, either. So frustration mounts. Of course progressives want to change the world to suit their taste, but perhaps some of the current frustration is because of the Democratic Party's oh-so-tenuous hold on power in Washington. They have a handful-of-votes majority in the House, no majority at all in the Senate and a president whose advanced age has already spurred talk of his not running for reelection. And, somehow, progressives see that as a power base from which to remake the country. Of course they're frustrated.

This content originally appeared on the Washington Examiner at washingtonexaminer.com/opinion/byron-yorks-daily-memo-after-court-argument-seething-frustration-on-the-left.