Democrats And The Trump Impeachment Trap

Byron York
|
Posted: May 02, 2018 12:01 AM
Share   Tweet
The opinions expressed by columnists are their own and do not necessarily represent the views of Townhall.com. 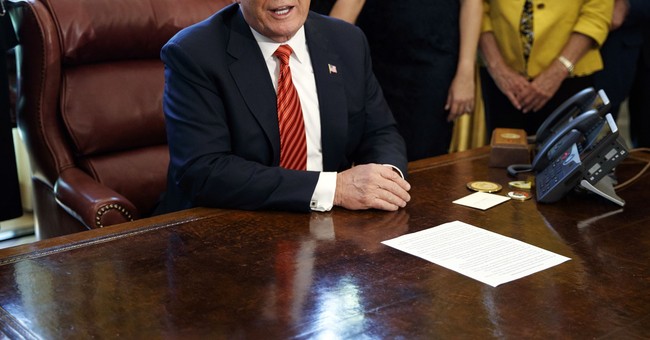 George W. Bush was in terrible political shape in the spring of 2006. The Iraq war was going disastrously, and voters were tired of the president, whose job approval rating in the RealClearPolitics average of polls was around 35 percent. (Bush's disapproval rating was around 60 percent.) The upcoming November '06 midterms were shaping up as a debacle for Republicans, who seemed likely to lose control of both houses of Congress.

Things were so bad that a part of the Democratic base looked toward the midterms openly hoping to impeach Bush on the charge that he had lied the country into war. One leader of that movement was Rep. John Conyers, who stood to become chairman of the House Judiciary Committee if Democrats won. Conyers' committee would originate articles of impeachment.

The problem, for Democrats, was voters. Now matter how much they wanted to make changes on Capitol Hill, and no matter how much they disapproved of Bush, they didn't want to impeach the president. Democratic candidates were stuck between their anti-Bush base and the larger electorate.

The impeachment talk was so worrisome to party leaders that Rep. Nancy Pelosi, who stood to become speaker if Democrats won the House, told her conference in May 2006 that "impeachment is off the table."

Pelosi would repeat that at various times during the campaign, and in November, on the day after Democrats won a smashing victory and she was poised to become speaker, she said in her first news conference, "Democrats are not about getting even; Democrats are about getting results. I have said before and I say again, impeachment is off the table."

Indeed, impeachment was off the table, as Bush served his last two years with a Democratic House and Senate. And then Democrats won everything in 2008.

Now, it is again spring in a midterm year, and there is again talk of impeaching a Republican president if Democrats win the House. Pelosi is still around and hopes to become speaker again. What's not clear is whether her 2006 impeachment strategy will work with today's Democratic party.

So where does that leave Pelosi and other Democratic leaders? Her instincts are as cautious as they were in 2006 -- and at this moment, Trump's job approval rating in the RealClearPolitics average, around 42 percent, is higher than Bush's was when Pelosi declared Bush impeachment off the table.

But 71 percent -- those Democrats who want to see Trump impeached -- is a big number. It suggests that Pelosi, or whoever leads House Democrats if the party wins in November, might not be able to overrule the base and simply declare impeachment a non-starter.

"Many Democrats in D.C. don't want to move forward on impeachment and think they can avoid it," tweeted National Review's Ramesh Ponnuru recently, after release of the Quinnipiac results. "I suspect they're wrong."

While Republicans have plenty of problems of their own, they are keenly aware of the Democrats' impeachment dilemma. And GOP strategists want to use that dilemma to make Democrats more uncomfortable and to juice up the Republican base. The argument to Republican and independent voters is easy: The economy is strong, Trump is enacting a conservative wish list, America is showing strength abroad -- and all Democrats want to do is impeach the president.

"It's a base motivator," says a GOP strategist working to keep control of Congress. "We have to remind (voters) that the things Democrats want to do are not mainstream. There are a lot of Americans who can't stand Trump, but they don't think he should be impeached."

The president himself is already raising the specter of his own impeachment as a way to fire up GOP voters. "We have to keep the House, because if we listen to Maxine Waters, she's going around saying, 'We will impeach him,'" Trump said April 28 at a campaign-style rally in Washington, Michigan.

Of course, there's a huge wild card in any discussion of Trump, the midterms and impeachment, and that is what happens in the Russia investigation. If some new, devastating evidence comes to light from special counsel Robert Mueller, the entire dynamic could change, and Trump could lose some support in the GOP and find himself in real danger of impeachment.

But all those Democrats are ready to impeach Trump right now. They don't need any new revelations. Unless something big changes, they could be a bigger problem for their own leadership than for the president.