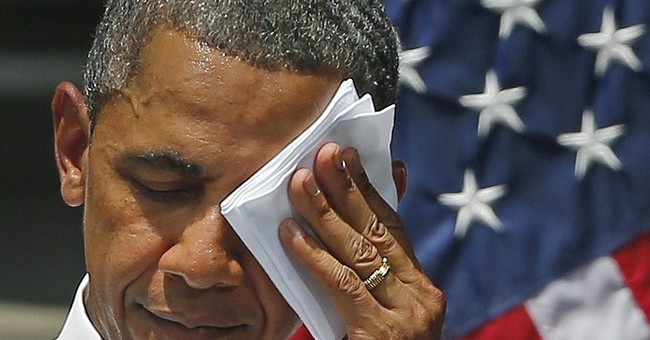 Trending
The Affordable Care Act originally passed the House in 2009 with 220 votes, all but one of them Democrats. Recently 251 members of the House, including 22 Democrats, voted to postpone for one year implementation of the heart of the act -- the individual mandate to purchase health insurance. If this were any other issue, liberal commentators might see a governing majority emerging in favor of delaying Obamacare.

In the last couple of years, House Republicans have voted over and over to repeal the president's health care plan. It got to be routine. Not long ago, however, the Obamacare battle took a turn toward the bizarre.

The cause was the administration's decision to delay by one year the mandate requiring big businesses to provide health coverage for employees or pay a fine. The White House acted in response to complaints from business owners, who called the mandate burdensome.

So Republicans thought: What about all those individuals out there who believe the mandate requiring them to buy coverage or pay a fine is just as burdensome? As the GOP saw it, the White House listened to big business but ignored the little guy.

So Republicans came up with a two-part strategy that would, among other goals, sound out House Democrats' attitudes toward Obamacare less than three months before it is to become a reality in American life.

First, Republicans introduced a bill that would write into law what the president had already done by fiat -- that is, delay the employer mandate a year. That seemed unnecessary, and a little mischievous, but the serious point, according to one House GOP aide, was to emphasize that "the president can't just determine which laws he's going to follow and when he's going to follow them."

Even though it was largely moot, Obama took the move seriously enough to take the somewhat odd action of threatening to veto a bill that would duplicate his own policy. And when the White House argued that the postponement legislation "would cost millions of hard-working middle-class families the security of affordable health coverage and care they deserve" -- remember, the bill would simply codify an action Obama had already taken -- the White House's position veered into the surreal.

The House voted on July 17, and in the end 35 Democrats voted in favor of the president's delay, while 160 voted against it. It's hard to interpret exactly what that means, but it doesn't seem good for Obama.

The second part of the GOP strategy was introducing the bill that would delay the individual mandate the same way Obama had delayed the employer mandate. The purpose, Speaker John Boehner said in a special floor appearance, was "to make sure families and individuals get the same break from Obamacare that the president wants for big businesses." The 22 Democratic votes in favor of the delay provided another sign that doesn't look good for the president. Boehner sent out a press release claiming "bipartisan opposition to a partisan train wreck."

Seemingly unsteadied by a turn of events that included his own threat to veto himself, Obama took to the White House East Room for an Obamacare pep rally. The Republicans were clearly on his mind.

"Yesterday, despite all the evidence that the law is working the way it was supposed to for middle-class Americans, Republicans in the House of Representatives voted -- for nearly the 40th time -- to dismantle it," the president said. "We've got a lot of problems in this country ... and yet, instead we're refighting these old battles."

Perhaps the battles would indeed be old if Democrats had written a law that went into effect a year or even two years after it was passed. But Obamacare became law more than three years ago and still hasn't gone into effect. Of course the battle is still going on.

Now the House bills go to the Democratic-controlled Senate, where they will die. But Republicans will try to ensure a noisy death. "We can make sure it doesn't get bottled up in committee," says one Senate GOP aide, "and then try to attach it to something on the floor." That means there will at least be some debate on the delays, even though Majority Leader Harry Reid will never allow a vote on them.

And after that? Republicans don't quite know. But they are confident that the coming implementation of Obamacare will give them more chances to undermine the health care law. "We had these two votes," says the GOP House aide, "because the president gave us an opportunity to take another whack at it."