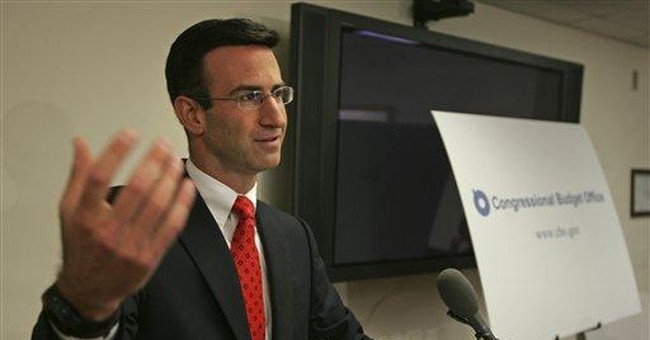 Whenever a conservative suggests reducing the federal deficit by cutting spending rather than raising taxes, there's always someone to ask, "Well, what would you cut?" Americans may say they want less government spending, the argument goes, but they don't want anyone to touch their services and subsidies and monthly checks.

Fair enough. But there's a persuasive counterargument going around in conservative circles these days: You can start cutting government spending without cutting anyone's services or subsidies or monthly checks. Just bring the pay of federal workers into line with pay in the private sector.

A recent Heritage Foundation study found the average federal worker (excluding the uniformed military) makes $78,901 a year in wages and salary versus $50,111 for the average private-sector worker. When you count generous health and pension benefits, the average total compensation of federal workers comes to $111,015 a year versus $60,078 in the private sector.

In recent years, that disparity has been fueled by an explosion of federal generosity on the high end of the pay scale. For example, USA Today recently reported that in December 2007, a total of 1,868 civilian workers in the Defense Department earned $150,000 or more; by June 2009, the number was 10,100. In late 2007, the paper says, just one employee at the Transportation Department earned more than $170,000. Less than two years later, 1,690 workers earned that much.

Other studies have come up with slightly different numbers. But there's no doubt that federal pay is higher than private pay across the board, not just in the upper brackets. If Congress were to freeze federal pay raises until the private sector begins to catch up, the savings to taxpayers would be considerable. Heritage scholar James Sherk estimates that ending the disparity could save the taxpayers $47 billion a year. (An American Enterprise Institute study puts the figure at $40 billion.) That won't get close to balancing the budget, but add up 10 years of that and the government will save significant money.

And it's done without cutting government services or subsidies. "In the past, the implication was that if you are spending less, then you are doing less," says Grover Norquist, the conservative head of Americans for Tax Reform. "But you could save money by paying public workers what you pay private workers and still do the same things."

Getting to public-private pay equity need not involve a sledgehammer approach. There are differences between the federal workforce and the private-sector workforce that pay reformers will have to take into account.

For example, government workers are more educated, older and more likely to be in managerial and administrative positions than the overall workforce. That means they make more money, just as comparable workers in the private sector make more than less skilled workers.

Reforming federal pay would take those differences into account. Highly paid federal workers who have the skills and experience to command high pay in the private sector would stay at the high end of the pay scale and might even see their pay go up. But others who make far more working for the government than they would for the private sector would likely have their pay frozen until it was closer to private standards. No one's pay would be cut.

In the Senate, Oklahoma Republican Tom Coburn has introduced amendments to the war supplemental spending bill that would freeze federal pay for a year. In the House, Republicans found a pay-freeze proposal was extremely popular with participants in the YouCut program, which asks the public for input on how to cut spending. When GOP leaders asked for a recorded vote on the measure, majority Democrats promptly shot it down. Still, the GOP sees pay equity as a winning issue. "If Republicans had thought that this was political death," Norquist says, "they would not have had that vote."

In the meantime, the problem is getting worse, not better. While the private sector has shed millions of jobs in the recession, the federal government has added nearly 200,000 employees to its rolls. That's more salaries, more benefits and more pensions. And the pay problem is replicated in states across the country; most of them have similar public-private disparities, and many of them are facing calamitous budget deficits.

Pay equity between government and private workers would help solve those problems. The next time someone asks, "Well, what would you cut?" -- conservatives have an answer.