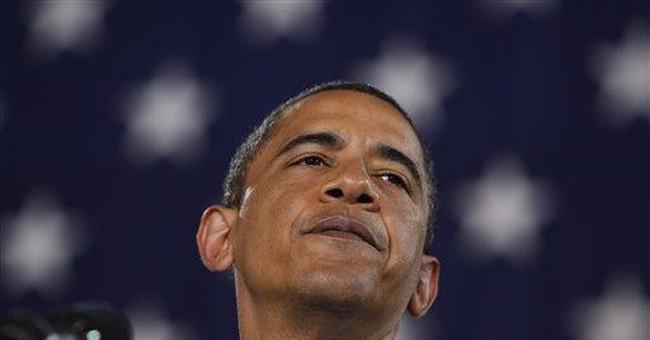 Those on the Left who have trashed George W. Bush for this entire decade claim they weren’t being rude or unpatriotic, but were simply talking truth to power. That has a nice ring to it, so I think I’ll give it a shot.

I have almost begun to feel sorry for Nancy Pelosi. After all, when you get past the facelifts and the Botox injections, the designer suits and the large private jet, you have an aging grandmother who, in a perfect world, would be home playing with the grandkids and letting the wrinkles show. Instead, she’s constantly on TV, telling lies and looking like a small animal staring at oncoming headlights. I think that instead of babbling about what she didn’t know and when she didn’t know it, she should claim the Twinkie defense just like that other two-bit San Francisco politician, Dan White. In case you don’t recall, when he went on trial for killing Harvey Milk and Mayor George Moscone. White’s lawyers, in making their case for diminished capacity, claimed he had been suffering from depression, and that his depression had been made more severe by a junk food diet that included a lot of Twinkies. I can see Rep. Pelosi taking that defense out of moth balls, dusting it off and blaming all of her recent insanity on cheap confections. Heck, forget the pastries; she’d only need to mention having to sit through meetings with the likes of Harry Reid, Rahm Emanuel or Arlen Specter. Even I would lessen her sentence.

Secretary Gates insists that Guantanamo has to be shut down because its very name is a source of embarrassment for America throughout the world. Well, I happen to think the world is an embarrassment and is therefore in no position to judge us. But the solution in any case is not to shut down Gitmo, especially when it will cost $80 million to do so and when nobody has the slightest idea where to move the terrorists, but to simply change the name of the facility. We could call it any number of things, ranging from Paradise to Fantasy Island. Or we could take our lead from the pop singer, Prince, and simply change it to the Prison Formerly Known as Guantanamo.

I don’t know Sonia Sotomayor personally and, so, I don’t dislike her any more than I do any of the other liberal judges that were on Barack Obama’s short list of Supreme Court nominees. The difference is that I saw a video of Judge Sotomayor addressing what I assume was a group of law students. After telling them that the courts are where policy is made, she gave a little laugh and acknowledged that she probably shouldn’t have said that when she knew she was being taped. But she did say it, and in doing so, she spoke for every left-wing judge in America. Here in California, judges have over-ruled the vote of the people on capital punishment, illegal immigrants and same-sex marriage. In Washington, the Supremes expanded eminent domain in a way that would have impressed even the likes of Stalin, Hitler and Castro, and decided that when the Founding Fathers included “the pursuit of Happiness” in the Declaration of Independence, what they had in mind were millions and millions of abortions.

The bone I have to pick with the Pope involves his cockeyed sense of priorities. Recently, I read a gruesome account of Catholic schools in Ireland. Even Charles Dickens could not have dreamed up such a nightmare. Apparently, for decades, the priests and nuns running these schools based their teaching philosophy on the precepts laid down by the Nazis who ran the concentration camps. With disgusting regularity, they beat and sexually molested the children, and suffered no consequences. At least not here on earth.

Now, I have nothing against the Catholic Church and, unlike some Jews, I don’t condemn it for ancient sins. However, a while back, when Pope John II was visiting America, he decided to use his influence to save the life of a person who had killed three people and was about to be executed in Missouri. Being the Pope, he got Governor Carnahan to commute Darrell Mease’s sentence to life without parole. At the time, I found myself thinking that if the Pope was going to go to bat for a cold-blooded killer, the taxpayers in Missouri shouldn’t be left holding the bag; instead, Pope John should have taken him back to the Vatican and let the Church put him up for the next 40 or 50 years.

Now we have Pope Benedict XVI traveling to the Middle East, spewing out his predictable platitudes, while managing to suggest a moral equivalency between Israel and those dedicated to Israel’s destruction. As usual, his words fell on deaf ears. But, then, why should Jews or Muslims really care what he has to say, especially when he refuses to speak out in the one area where his authority is unquestioned? After all, a couple of thousand years ago, Jesus said, “Suffer the little children to come unto me, and forbid them not: for of such is the kingdom of God.” Jesus used “suffer” in the sense of “permit” or “allow,” but in modern times, far too many priests have perverted it to mean actual suffering. It shouldn’t be asking too much of the Pope that he excoriate and ex-communicate those priests here in America and in Ireland who have brutalized countless Catholic children for their own base pleasure and amusement.

As for President Obama, I would like to see him quit chastising George Bush while at the same time carrying forth his policies. Understand, I approve of those policies, which have helped safeguard America for nearly eight years. But, saying one thing while doing another may fool some of the people some of the time, and fool Chris Matthews and Keith Olbermann all of the time, but it doesn’t make Obama look superior to the ex-president; it merely makes him look petty and deceitful.

Furthermore, I would suggest that Barack Obama quit telling us that everything he says and does garners us great respect in the world community. The majority of that community is made up of lunatics and gangsters, and most Americans don’t want to gain the love and admiration of North Korea, Russia, Cuba, Saudi Arabia, Somalia, Venezuela, Syria, Iran, China, Pakistan, Afghanistan, Turkey, Yemen or Indonesia. It would be nice, though, if they were at least a little bit afraid of us.

If I had the president’s ear, I would beg him not to be a sucker, and not to think for a second that international villains will succumb to his much-publicized charm. They will applaud his speeches and return his smiles, and they’ll happily stab him in the back. I would try to make him realize that the world’s political leaders are just like Chicago’s, except that some of them have nuclear bombs at their disposal.

It’s easy, I would tell the president, to mouth all the usual cliches and be lauded by the various hand puppets and hand maidens at MSNBC and the New York Times, but being politically correct is, unfortunately, not the same thing as being correct politically.