Obama, Your Slips Are Showing! 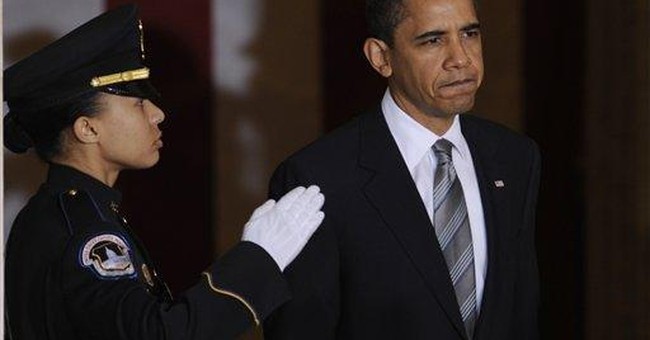 Judging by my e-mail, a great many conservatives are counting down the days until they next get to vote in 2010. They hope and pray that Americans will come to their collective senses and undo some of the horrors unleashed by last November’s election.

Naturally, I hope they’re right. But I’m not sure that it will be enough to sound the alarm that the sky is falling because, by then, I suspect it will have already fallen. Besides, I’m not convinced that most of my fellow citizens have a problem with the direction that Obama, Pelosi and Reid have taken us during these past few months.

At the rate that Obama and the liberals are going, when it comes to piling up the national debt, nationalizing banks and major companies, scuttling our missile defense system, reaching out to Islamic and Communist tyrants, funding ACORN, AmeriCorps and Hamas, discussing nuclear disarmament with Russia at the same time that Iran, Pakistan and North Korea are gearing up, talking tough to Israel while currying favor with the Arabs and the Islamists, I have no idea what will be left to salvage a year-and-a-half down the road.

Still, if you know where to look, there are certain ironies one might find amusing. For instance, ever since Obama came on the scene, his supporters have insisted that, unlike George W. Bush, Obama would have influence with the other world leaders, particularly with those who speak German, French, Spanish and Italian. How surprised his disciples must have been when Obama begged for European cooperation in fighting the Taliban in Afghanistan and all he heard was a chorus of nein, non, nunca and nospeaka the English.

But then, anyone who seriously expects the Europeans to take up arms is the same person who believes that rabbits lay Easter eggs. No European nation would want to risk its well-deserved reputation for unenlightened self-interest by doing the decent thing.

You might think there would be some small feeling of obligation to the country that saved Europe from the Nazis in the 1940s and from Soviet domination over the following four decades, but that would be asking the impossible of governments that regard gratitude as an unseemly emotion and confuse arrogance with sophistication.

Frankly, if it didn’t constitute such a direct threat to the United States, I would rather enjoy the ongoing spectacle of Islamists finally, after a thousand years, conquering Europe.

Speaking of Muslims, about whom Obama, as was the case with Bush, can never say enough nice things, I’d like to know why America has decided to sign on as defenders of the faith. We went into Kosovo, Kuwait, Iraq and Somalia to protect people who despise us and want us dead. For good measure, when a tidal wave hit Indonesia, we sent over a billion dollars in aid. That was back before Obama, when a billion dollars was still a lot of money, and was far more than any of the oil-rich nations sent to bail out their fellow Muslims.

To top things off, we elected a fellow named Barack Hussein Obama, who rushes off to Turkey on the taxpayers’ dime to tell them how large a role Muslims have played in American history.

One thing I must say for Obama is that he has become very adept at bowing. First there was that memorable kowtow to King Abdullah, and he quickly followed that up by taking numerous bows for the rescue of Capt. Richard Phillips. We are all delighted that, thanks to the U.S. military, the captain was saved, but the only people who deserve congratulations are Commander Frank Castellano, the Navy SEALs and the fantastic marksmen who hit their three targets. The only thing the Commander in Chief did was to prolong the nightmare for Capt. Phillips and his family by saying that no action should be taken unless the hostage’s life appeared to be in imminent danger.

If this is the administration’s approach to hostage negotiations, we can better understand why Obama and Biden are insisting that Israel take no preemptive action against Iran. Apparently, no imminent danger can be assumed until Tel Aviv is nuked off the face of the earth.

It pains me to admit it, but there are certain times when I find I am ashamed of my beloved country. One of my saddest moments was watching that last helicopter lifting off from the roof of the American embassy in Saigon, leaving behind our South Vietnamese and Cambodian allies to the tender mercies of Pol Pot and Jane Fonda’s other murderous chums.

Another occasion was when our president went to Europe recently and, doing his rather uncanny impression of Michael Moore, apologized for American arrogance. Naturally, his own arrogant words were greeted with great applause from a pack of jackals who would have been under the boot of Hitler or Stalin, except for America’s hatred of tyranny, its unrivaled display of courage and fortitude, and its sacrifice of treasure and blood.

It is at such times that one can easily understand why the question about Obama’s citizenship continues to plague so many people. Which leads me to admit that I have always been befuddled by the notion of dual-citizenship. As a concept, it’s illogical. As a matter of national policy, it’s insane. What truly confounds me is how it’s possible that dual citizenship is legal, but bigamy isn’t.

Along similar lines, I have long wondered how it is that something as asinine and clearly un-American as the Congressional Black Caucus can exist. I mean, as embarrassing as the rest of Congress is, these jackasses take the prize. The idea that members of the House should be separated on the basis of color, even on a voluntary basis, is undeniably racist. Still, I can see where if I were a congressman, I would welcome any excuse to be as far away as possible from the left-wing lunkheads who make up the Caucus.

Six of its members, Barbara Lee, Bobby Rush, Melvin Watt, Laura Richardson, Marcia Fudge and Emanuel Cleaver II, flew down to Cuba on a junket and came home raving about their visit to Castroland.

In their collective ability to turn a blind eye to the victims of this 50 year old Communist tyranny, the dirty half dozen remind me of the dupes who came back from the Soviet Union in the 1930s, rhapsodizing about the glories of the workers’ paradise, while managing to overlook the intentional starvation of millions of peasants, the torture and executions of anti-Communist intellectuals, the Siberian gulags, rampant anti-Semitism and political assassinations.

Behind their backs, Stalin parroted Lenin, referring to them as useful idiots. However, I think when it comes to Barbara Lee and her fellow loonies, even Stalin would have been hard-pressed to call them anything but useless.