Responding to My Critics 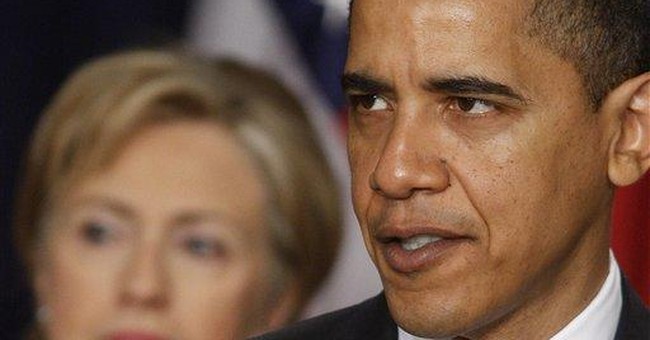 Recently, I posted a piece at Townhall in which I suggested that Mrs. Obama is not, to put it mildly, my ideal. I stated that so long as the president and the first lady are Democrats, the media can’t stop rhapsodizing about them. So it was that John Kennedy, who had huge jowls, Bill Clinton, who looked like a taller version of W.C. Fields, and Barack Obama, who has Dumbo’s ears, have all been described in terms that would have made Cary Grant blush.

Hillary Clinton, so far as the media was concerned, was nothing less than the most brilliant woman in America. Now we have Mrs. Obama, a rather plain woman, being passed off as a movie queen.

I did go on to admit that the First Lady was not my ideal representative of American womanhood. And, yes, I used the b---h word. Intemperate? Perhaps. But with all the kissing-up she gets from the MSM, I felt someone should use honest language when pointing out that the empress is naked.

In my defense, I did it in context. I reminded you that this woman sat in Rev. Wright’s church for 20 years, soaking up his racist rants, and then had him marry her and Barack, as well as baptize their children. Furthermore, she had gotten into an Ivy League school, thanks to Affirmative Action, and then showed her gratitude by writing a racist screed for her college thesis. For good measure, she used that degree to get a $125,000-a-year job in Chicago, which coincidentally jumped to over $300,000 once her husband went to the Illinois state senate. And, finally, after all that, she announced to the world that America is a mean country and that the first time she was proud of this nation was when her husband deigned to run for president.

Suddenly, I was receiving scores of angry and obscene e-mails, mainly from blacks, taking me to task for, one, saying that Michelle Obama is ugly because she’s black, and that I was a bigot because I thought blacks should all be back on the plantation.

Now God knows I have received more than my share of negative e-mails. When I suggest that it’s time to end the War on Drugs or give credit to George Bush for preventing another 9/11 or that Israel deserves the support of all decent people in its nonstop battle with Islamic barbarians, I fully expect to hear from readers who disagree with me. It’s a point of pride with me that I answer all my e-mails, whether they’re complimentary or otherwise. But these e-mails were nearly without exception vicious, crude and, what’s more, not on point. It’s bad enough being attacked for what you’ve actually written without getting clobbered for what you haven’t.

While it’s true that I stated that I thought it was absurd for Mrs. Obama to be posing for every glamour magazine, as if she were a movie queen, I never said that she was ugly because she’s black, anymore than I took their race into consideration when I set the record straight about the looks of John Kennedy and Bill Clinton.

Finally, I received an e-mail with a link to the Huffington Post. I clicked on it and all was revealed. It seems that a fellow named Chris Kelly had devoted a column to me.

To be fair, which is more than Mr. Kelly was, all the words he quoted had appeared in my piece. The only thing missing was the context, but that’s likely to happen when you excerpt a hundred or so words out of a piece that ran about 750. Of course he peppered the piece with nasty comments, but that at least was his prerogative.

For good measure, he put Townhall in its place. At least he tried to, although writing that Townhall is the “Internet home of culture warriors Dennis Prager, Bill Bennett and Michael Medved” sounds more like an advertising slogan to me than a putdown.

Later in the piece, Kelly quoted the following from an article I wrote a while back: “If we were a racist society, Oprah Winfrey wouldn’t be a billionaire; she’d be fetching someone’s mint julep. And Colin Powell and Condoleezza Rice wouldn’t grow up to be secretaries of state; they’d be sweeping out the stables. And Will Smith and Denzel Washington wouldn’t be movie stars; they’d be in the fields picking cotton.”

Even taken out of context, it seems pretty clear that I was simply drawing a comparison between America in 2009 and Mississippi in 1859, a comparison that even those, like Attorney General Holder, who insist this is still a racist nation, could easily grasp.

Along the way, Mr. Kelly took a couple of gratuitous pot shots at Christians because Townhall is owned by a Christian radio network, a fact I was aware of, and that Hugh Hewitt is its executive editor, which is something I hadn’t known.

The worst thing about being labeled a racist is that denying it gets you nowhere. Still, a long time ago, I wrote, and still believe, that anyone who hates another person because of his race, his religion or his sexual proclivity, is just being lazy, because, with just the slightest effort, you can usually find a far better reason to despise him.

That brings us to Mr. Chris Kelly and the introduction to his piece, in which he wrote: “Burt Prelutsky was a TV writer a long time ago. Then he aged out of it and became a crank. This wasn’t one of those major losses like Steinbeck. Now he writes a column for Townhall.com, the popular website owned by a Christian radio network.”

For openers, I can’t tell you what the crack about John Steinbeck means. I’m afraid you’ll have to figure that one out for yourselves. But, for the record, I have always been cranky and I hate to see it attributed to age. I do know, however, that someone who writes for a website owned by Arianna Huffington is in no position to be throwing stones at anyone else’s website.

All kidding aside, when this schnook dismisses ageism in Hollywood, an insidious practice that has led to suicide, bankruptcy and broken homes, in such a cavalier fashion, I take it personally and he should be ashamed of himself.

I must confess that I had never heard of Kelly and had to research him on the Internet. His writing career began in 1990, so I am assuming he’s in his mid to late 40s. In which case, ageism being as rampant as it is in this town, Mr. Kelly, all I can say is, tick, tock, tick, tock.

My research also disclosed that he has written for the following TV series: “Sports Monster,” “TV Nation” featuring Michael Moore, “She TV,” “House of Buggin,” “The Whizzard of Ow,” “Twins,” “Grounded for Life” and “Cavemen”. Have you ever seen any of these shows? Have you ever even heard of them?

Along the way, he put in a year with David Letterman. Of late, he has tied his career to Bill Maher, and his nose to Bill Maher’s heinie, following him from “Politically Incorrect” to “Real Time.”

Now, far be it from me to criticize a fellow writer, but being one of eight or ten guys sitting in a room with Bill Maher coming up with lame jokes about Rush Limbaugh isn’t the sort of thing that John Steinbeck or I considered real writing.

I mean, it’s bad enough having a bunch of boorish illiterates calling me a lot of dirty names. But when your credits include “MASH,” “Mary Tyler Moore,” “McMillan & Wife,” “Bob Newhart,” “Rhoda,” “Diagnosis Murder,” “Family Ties” and a bunch of award-winning TV movies, you really have to wonder what the world is coming to when you wind up being insulted by some schmo who wrote for “House of Buggin” and “The Whizzard of Om”.