He's My President, But I Don't Have to Like It 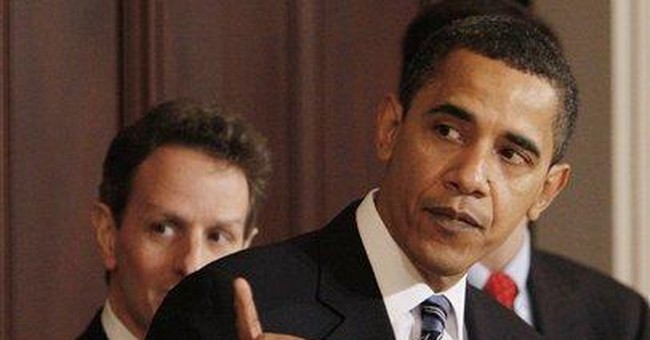 If I hear one more person point out that Obama is the president and that it’s our duty to support him, I just might run amok. For one thing, I resent being reminded that he actually won the election and that it’s not all a bad dream from which I’ll awaken as soon as the alarm clock rings. For another, there was a very good reason that I voted for John McCain, and it certainly had nothing to do with my having great expectations of the man, and everything to do with my conviction that Obama was a left-wing ideologue.

Judging by the early days of his administration, I have had to reevaluate him. He’s even worse than I feared. It’s been one disaster after another. His appointments have been a series of embarrassments. His hard sell of the Pelosi-Reid trillion dollar earmark makes him look like the worst sort of fear-monger. And, considering the fact that he was sold to us as eloquent and a fellow who could think on his feet, his use of a teleprompter at his press conference reminded me of the Wizard of Oz, the con man behind the curtain. I guess you can take the man out of Chicago, but you can’t take Chicago out of the man.

Frankly, I don’t know why anybody continues to hold Obama in high esteem. Maybe it’s like those women who marry charming fellows only to discover after the vows have been exchanged that he’s an abuser. In spite of the black eyes and split lips, the ladies are just too embarrassed to call the cops and have their friends and relatives discover what a dunderhead they’ve been.

The way Obama has been jetting around on Air Force One, which costs the taxpayers a bloody fortune every time it lifts off the tarmac, you’d think the environmentalists would be reading him the riot act. But as we’ve learned with Al Gore and Robert Kennedy, Jr., so long as you’re a liberal, you only have to say the right things about fossil fuels, you don’t actually have to believe them.

The question that keeps begging to be asked is whether Obama ever says anything with honest conviction. Even when he championed the so-called stimulus bill, he indulged in double talk. Obama swore that it would create or save four million jobs. Now I can’t swear to be an expert in Obama-speak, but to me that sounds like he gets to claim, if at some time in the future there are four million Americans who are still employed, that he lived up to his word.

What truly astounds me isn’t that the Democrats, along with three feeble-minded Republicans, Specter, Collins and Snowe, voted for the pork pie, even though nobody had had the time to wade through its thousand pages. After all, even without knowing the details, they knew that the actual purpose of the legislation was to suck up even more money and power for themselves, thus completing the job begun 75 years ago by FDR. What I found profoundly depressing was that, according to a recent poll, a majority of Americans approved its passage even though they were convinced that it would hurt, not help, them. Perhaps the politicians are entitled to regard us as contemptuously as they do.

One of the provisions of the bill, the one dealing with health care, pretty much gives the federal bureaucrats the power to determine how much money and effort is expended on behalf of the elderly. If you thought HMOs were bad, you ain’t seen nothing yet. When I heard about it, I was instantly reminded of a 1973 movie called “Soylent Green.” The title of the Charlton Heston-Edward G. Robinson movie referred to the product turned out by the mysterious Soylent Corporation. It took Mr. Heston most of the movie to discover that Soylent Green was the end result of old people being turned into protein wafers.

As if Obama isn’t annoying enough, the way he is constantly jutting his chin skyward as if in homage to Benito Mussolini, he saddles us with an attorney general who calls white Americans cowards because, to his way of thinking, we don’t engage in frank conversations about racial matters.

I get the impression that Eric Holder is confused about the nature of his job. He is only the government’s chief lawyer. Being the public scold is, in the immortal words of his boss, above his pay scale.

It seems that while Holder grants that these days the workplace is integrated, he is troubled that there’s “not much significant interaction between whites and blacks in social settings. On Saturdays and Sundays, America in the year 2009 does not, in some ways, differ significantly from the country that existed some 50 years ago.”

This arrogant twit who, in spite of playing a part in Bill Clinton’s pardoning of Marc Rich and commuting the sentences of 16 Puerto Rican terrorists and a handful of Arab troublemakers, got the job for no other reason than that he’s black. He wants frank talk? Fine.

One, most white Americans don’t spend a lot of time dwelling on anyone’s race. They’re much too busy trying to make a living and raising their kids. Two, in case you were out of town, white people just got done electing the first black president. Three, most people, black and white, spend their weekends with their families, who, even now, tend to be of their own race. Four, many Americans belong to churches open to all denominations, even though Holder’s boss attended an all-black church for 20 years. I have no idea what sort of church, if any, Mr. Holder attends, but if spending quality time with white people is so important to him, that might be a good place to begin.

Five, does our new attorney general spend much time with Asians or Hispanics, or is it only whites he yearns to hang with? Six, does this mean that he intends to start inviting lots of non-blacks over to the house for weekend bar-be-cues and sleepovers? And has he run this plan by Mrs. Holder?

As I recall, Barack Obama insisted he was going to be the first post-racial president. Perhaps sitting down and talking turkey with this turkey would be the place to start.

Some people have wondered why I, who take so much interest in politics and politicians, have never run for public office. Aside from not wishing to spend much time with politicians, the only job that would appeal to me is the top one. I mean, who wants to be one of 435 congressmen and have to listen to Nancy Pelosi day in and day out or be one of 100 senators and try to stay awake while Harry Reid, Robert Byrd or Barbara Boxer, droned on?

As for being president, I’m afraid the deck is stacked against me. It’s not that I’m Jewish or a conservative, but that I’m bald, short and have a beard. The fact is it’s been 53 years since we last elected a bald president, and Eisenhower had the advantage of twice running against bald Adlai Stevenson. In nearly every presidential election, the taller candidate wins. And, for good measure, the last man with facial hair to be president was William Howard Taft, who only had a mustache, and that election was in 1908. The last man with a beard to be elected was James Garfield, in 1880, and he was shot and killed shortly after he was elected. Even I can see the writing on that wall.

Just possibly the reason we wind up with so many oafs in the Oval Office is because, down deep, it’s far more important to us that they be tall, clean shaven and with a full head of hair, than that they be honest, honorable and patriotic.

Finally, lest I be accused of only picking on left-wingers, let me confess that I recently sent an e-mail to Sean Hannity. Although I think dumping Alan Colmes was a smart move, I let him know that I thought the “Hate Hannity Hotline” videos on his TV show were a ridiculous waste of time. After all, if I wanted to listen to a bunch of loudmouth, left-wing ignoramuses sounding off, I wouldn’t be tuned to Fox, I’d be watching MSNBC.