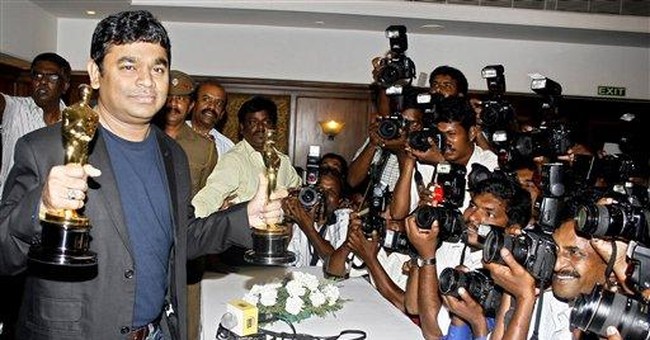 When I first thought about writing this piece, I was only going to list my all-time favorite movies, breaking them down by decade. I was going to explain that these weren’t my idea of the greatest or most innovative films of the past 80 years or so, but merely the ones I have enjoyed the most, and in most cases have seen more than once.

Because the choices are totally subjective, a lot of movies you might expect to find -- movies such as “Gone With the Wind,” “Lawrence of Arabia,” “Dr. Zhivago,” “The Godfather II,” “Easy Rider,” “All That Jazz,” “One Flew Over the Cuckoo’s Nest” and “Bringing Up Baby” -- aren’t included. The reason is that I didn’t enjoy them.

But before I got to it, along came the Oscars, and it would seem like a serious oversight not to comment.

For openers, I had even less interest than usual because I thought 2008 was the worst movie year in history, but I did make my annual wager with my wife, and so I had a vested interest -- 25 cents and bragging rights. For the record, I won, but that’s because she tends to pick the candidates she’s pulling for, whereas I put sentiment aside and go for the gold.

Having sat through Oscar shows hosted by Whoopi Goldberg and David Letterman, I naturally assumed these things couldn’t get any worse. I was mistaken. The entire production was one big mishmash. I could never quite figure out what film clips I was looking at. Some of them seemed to be scenes from the nominated movies, some seemed to be from old classics and still others seemed to have been culled from my worst nightmares. But even harder to take was listening to all those former Oscar-winners paying fulsome praise to the nominees seated in the audience. The nominees kept clasping their hearts and mouthing “I love you” back at them. I hadn’t seen so many kisses blown since Carol Burnett went off the air.

Other loathsome moments included Bill Maher’s juvenile remarks about God and religion, and Dustin Lance Black’s acceptance speech upon receiving the Oscar for his mawkish “Milk” screenplay. It struck me as he droned on that he was simultaneously propagandizing for same-sex marriages and trolling for a date for the next Gay Pride Parade.

Once again, I was reminded that the Best Song category should have been retired decades ago when Hollywood stopped producing musicals. In the old days, Gershwin, Berlin, Rodgers, Porter and Kern, competed for Oscars. This year, two songs from “Slumdog Millionaire” duked it out with a song from “Wall-e.” If you’re curious why three songs without a discernible melody between them would be competing, it’s because the folks in the music division of the Motion Picture Academy insist on retaining the category. You would have thought that embarrassment would have trumped professional ego back in 2006 when the Oscar went to “It’s Hard Out Here for a Pimp,” but that’s only because you don’t realize how impossible it is to embarrass Hollywood.

That brings us to Sean Penn, who picked up his second Oscar in six years. His victory was viewed as a major upset. Mickey Rourke was considered a heavy favorite to win even though Penn had portrayed Harvey Milk, a heroic figure in homosexual mythology. The truth is, even I was slightly surprised by his victory. However, I had told several people that I believed Rourke had shot himself in the foot a while back when he won the Golden Globe and took the occasion to say he refused to condemn George W. Bush, urging people to consider the pressure the president was under in the wake of 9/11. Hollywood doesn’t forgive and Hollywood doesn’t forget.

Without a comedian host, the laughs were even fewer than usual. In fact, one of the few chuckles I had all evening was when Sean Penn, in collecting his Oscar, took a moment to pay homage to Barack Obama, calling him, of all things, elegant. Naturally, the audience responded with great applause. Apparently, neither Penn nor the trained seals at the Kodak Theatre considered it worth noting that the president is on record as being opposed to same-sex marriages!

The 1930s: “It Happened One Night,” “Alice Adams,” “The Gold Rush,” “Destry Rides Again,” “Mr. Smith Goes to Washington,” “The Wizard of Oz,” “Bachelor Mother,” “Make Way for Tomorrow,” “My Man Godfrey” and any one of these four Astaire-Rogers films, “Top Hat,” “Carefree,” “Gay Divorcee” or “Swing Time”

I just noticed that it adds up to a hundred movies, with roughly 40 of them being comedies or musicals. So even if you think I have lousy taste, you should at least give me points for not trying to impress you with a lot of pretentious hooey.