Liberals Under the Microscope 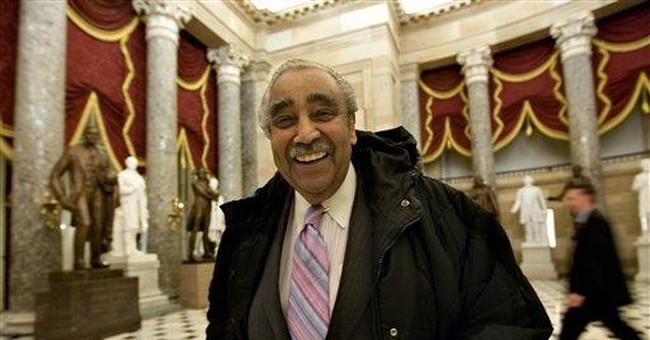 If I had a bigger ego, I could easily imagine that liberals say and do the things they say and do simply to perplex or annoy me. But I know I shouldn’t take it personally. All sane and sensible people are equally dismayed.

For instance, Rep. Charlie Rangel, chairman of the powerful House Ways and Means Committee, has been accused of failing to report income on a rental house he owns in a Dominican Republic resort, used one of his four rent-control New York apartments for campaign activities, mailed letters on official congressional stationery soliciting funds for an educational center to be named after himself, and used government property to store his Mercedes.

In response to the accusations, the congressman said, “I don’t believe making mistakes means you have to give up your career.” I agree. When a congressman makes these many “mistakes,” he should go to jail.

Even the New York Times called Rangel an embarrassment. House Speaker Pelosi, who vowed to rid Capitol Hill of corruption -- bringing to mind a picture of someone trying to drain the Pacific Ocean of water using a teaspoon -- said that she “saw no reason why Mr. Rangel should step down.” Of course not, Nancy. It’s not as if he’s a Republican.

Whatever you might say about Democrats, you can’t deny that they’re often good for a laugh. Back when he was the crack-smoking mayor, Marion Berry proudly announced, “Outside of the killings, Washington, D.C., has one of the lowest crime rates in the country.” Now that’s what I call a half-full glass kind of guy.

Apparently nobody is immune to the financial meltdown. In return for endorsing Barack Obama, Hillary Clinton got him to promise to help pay off her campaign debt. Towards that end, Joe Biden recently sent an e-mail to three million of Obama’s donors, nagging them for contributions. What’s more, this is the second time the suckers were being hit up on Hillary’s behalf. Of course it’s not for me to say how people spend their hard-earned money, but the last I heard, the Clintons were worth upwards of a hundred million dollars. Are they saving it all for a rainy day? Do these people even pay for their lunches?

It’s said that cynics know the cost of everything and the value of nothing. Look up “cynic” in the dictionary and you’ll find a photo of the Clintons.

A while ago, I observed that sometimes it seemed to me that the people most anxious to get married were homosexuals. But I was conned. We now see by the low number of marriages that have actually taken place that the entire campaign was more an excuse to stage demonstrations and whine about inequality than a sincere desire to tie the knot that motivated them to make an issue of the issue.

It’s worth noting that Hollywood, as you would expect, is filled with people who believe fervently in same-sex marriages, but not so much in opposite-sex marriages. Even when there are kids involved. Just a few of the parent couples who have decided that marriage didn’t fit in with their plans are Naomi Watts and Liev Schreiber, Halle Berry and Gabriel Aubry, Kurt Russell and Goldie Hawn, Tim Robbins and Susan Sarandon, Chris Noth and Tara Wilson, and, of course, Brad Pitt and Angelina Jolie.

I must confess I got a kick out of Pitt’s excuse for not proposing to the mother of his children. He said that until all the gays in America were given the right to marry, he wouldn’t marry Angelina. I mean, I’ve heard of guys using wars, the economy and even the nuclear bomb, as an excuse not to march down the aisle, but this one takes the cake. Just not the wedding cake.