That's No Man, That's My Wife 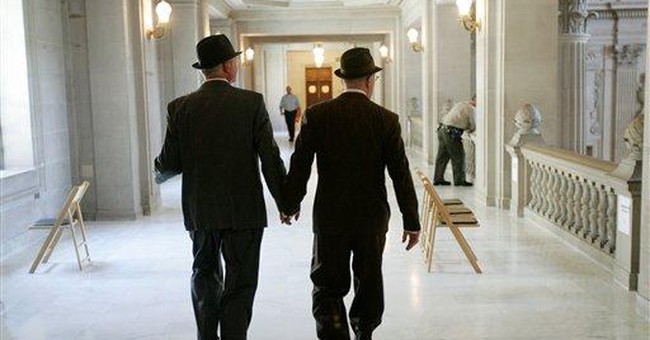 As you may have noticed, the California Supreme Court recently decided by a 4-3 margin to green light same-sex marriages. In doing so, they over-turned a ballot measure that 61% of the voters approved in 2000, which stated that “only marriage between a man and a woman is valid and recognized in California.” Although there is nothing in the state constitution that warrants that vote being set aside by four jurists, these days there’s nothing unusual about 56% of the judges over-ruling 61% of the electorate.

It’s no big surprise that the three judges who demurred had been appointed by Republican governors. What is odd and rather troubling about this turn of events is that three of the four judges who think same-sex marriages is a swell idea were also appointed by Republican governors. And lest you leap to the perfectly reasonable conclusion that this can all be laid at Gov. Schwarzenegger’s doorstep, the only judge he put on the bench was Carol Corrigan, and she was one of the three who dissented. Chief Justice Ron George and Kathryn Werdegar were appointed by Pete Wilson, and Joyce Kennard by George Deukmejian. In fact, of the seven justices, only Carlos Moreno owes his black robe to a Democrat, Gray Davis.

When you realize that David Souter was placed on the U.S. Supreme Court by George Herbert Walker Bush, you begin to wonder if Republicans bother paying any attention at all to such matters. When it comes to picking judges, do they flip a coin or do they just pick names out of a hat?

I realize that many people, after several years of unrelenting gay propaganda in the media, have been brain-washed into believing that to oppose same-sex marriages is to be the worst kind of bigot. They have cleverly insisted that it is akin to being opposed to bi-racial unions. That, of course, is sheer sophistry. What marriage of a man and a woman of different races is akin to is marriage between a man and a woman of different religions or different nationalities. Marriage between two men or two women, on the other hand, is the end result of political correctness carried to its ludicrous extreme.

If you disagree, please let me know on what particular basis, you could legally or morally oppose marriage between a sister and her brother or a father and his daughter or, for that matter, between a man and a female softball team, so long as they were all consenting adults. I can’t wait until justices George, Werdegar, Kennard and Moreno, are asked to adjudicate just such a case in the future. And, believe me, having swung open that particular door, it’s only a matter of time until a parade of human oddities come marching in.

It is fascinating how completely the heterosexual world has come to accept homosexuality as a norm. Back in the 1890s, Oscar Wilde sued the Marquis of Queensberry, the father of Wilde’s male lover, for daring to call him a sodomite. Three days into the ill-advised libel suit, Wilde’s lawyers decided to call it off when it became all too apparent that the Marquis was going to be able to prove his case.

At that point, Wilde was arrested on the charge of gross indecency. During the trial, Wilde was asked to explain what the Marquis’s son, Lord Alfred Douglas, had been referring to when he wrote to Wilde of the love that dares not speak its name. “It is beautiful,” said Wilde, who was notorious for picking up sailors, servants and young male prostitutes, “it is fine, it is the noblest form of affection. It is intellectual, and it repeatedly exists between an older and a younger man, when the older man has intellect, and the younger man has all the joy, hope and glamour of life before him.”

The trial ended with, you should excuse the expression, a hung jury. There was then a second trial and Wilde was found guilty and sentenced to two years at hard labor. Apparently, the jury didn’t regard Wilde, who was in his mid-30s when he took up with Lord Douglas, as sufficiently avuncular to buy his old graybeard defense.

It’s strange from our vantage point to realize there was a time before same-sex marriages and gay pride parades when homosexuality was the love that dared not speak its name.

These days, it’s the love that never shuts up.