Clinton or Trump: The Risk We Must Take.

Bryan Crabtree
|
Posted: Oct 17, 2016 12:01 AM
Share   Tweet
The opinions expressed by columnists are their own and do not necessarily represent the views of Townhall.com. 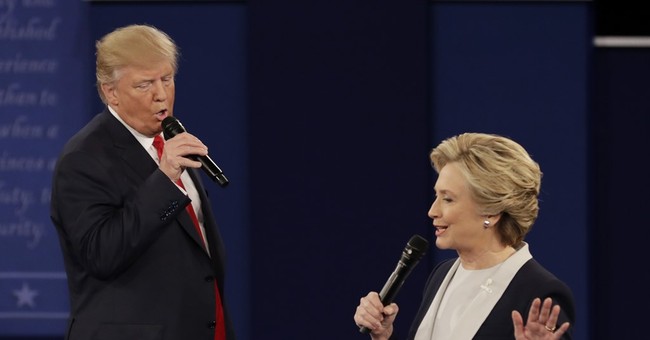 Donald Trump is a candidate who is called to the presidency for the purpose of repairing America. Hillary Clinton is a candidate whose purpose in life is to be president. First Lady Michelle Obama said as much at a campaign speech this week when she said, “[Clinton] has waited her turn.”

Trump may reach the presidency, even with the latest scandals, but not fulfill his purpose. Clinton, if she reaches the presidency, will have already reached her purpose. This is a distinctive difference between the two.

Trump is sacrificing his name, reputation and finances to run for president. Regardless of his business record, lawsuits, bankruptcies or ‘vile’ commentary, there is no imaginable (and legitimate) reason that Trump wants to be president other than out of concern for this nation. Most business-people are distraught, even destitute as they watch our country spiral into an abyss of regulation, compliance, division and cultural decline. Trump simply has the money and power to be heard. He has more influence over voters than even our president at this point.

Clinton, by contrast, has been running for president since law school. Her purpose is to fulfill her legacy as the first female president. Her resume of forty years in public-service proves she’s not going to improve poverty numbers, help minorities, empower women or move society in a positive direction. At every step of her impressive resume she has worsened anything she touches.

Trump has provided us with a clear measure of his purpose:  Security, lessening job-killing regulations (like Dodd-Frank), repealing Obamacare (and replacing it with a better plan that doesn’t harm citizens with pre-existing conditions), tax reform and chasing conservative Supreme Court justices. These are American values. Clinton’s values are punitive to hard-working Americans.

Should we believe Trump? What is the alternative? We already know we can’t believe Clinton! Trump brings us a chance and hope we can improve our future.

We live in a society of hypocrites that act like they attempt to portray an image of perfection. The moment anyone makes a mistake, they are immediately ‘destroyed.’ Many people need to point out other’s faults in order to distract from their own imperfections. This is called ‘projection.’ If you’ve never said bad things about other people, never lied and have always served others before serving yourself, please introduce yourself to me - as I would consider it a privilege to meet the next ‘Messiah.’ Of course, that ‘human’ doesn’t exist.

This election is about purpose. Is our purpose to navigate away from the economic principles and truths that built our great society? Then, vote for Clinton. Or is our purpose is to change the direction of America, empower people to succeed and return accountability to our government? If so, then that ‘vessel’ is a loud, brash, extremely flawed man named Donald Trump.

For many it’s a regretful choice which perhaps we should not be proud. However, Trump has the ability to change that. Clinton will not.

It’s amazing to me that millions of Americans watch shows featuring Kim Kardashian, yet simultaneously loathe at the fact Trump is our Republican nominee. On one hand, Trump is simply speaking a harsh truth over the American people many of us do not want to hear. On the other hand, he has played the role of Kardashian for years while building his brand, promoting his television shows and enriching himself in the private sector.

We never heard a single person call him racist, bigoted or questioned his treatment of women until he announced he wanted to run as a Republican presidential candidate. Suddenly, everything people loved about him, they now loathe.

The difference? Most of Trump’s antics have resulted in thousands of jobs, millions in charitable donations and profitable businesses (save a few). Kardashian? She fakes a $10 million jewelry heist in order to promote her television show! This crime didn’t create a job, fund a charity or empower anyone. It simply drew attention to her.

Kardashian will get a pass and people will still follow and watch her in awe while she does nothing for our society - while hypocritically and simultaneously bashing Trump for far less. In such a celebrity-culture, it amazes me that the moment someone starts talking about rehabilitative policy and engages in politics, it’s only then all their flaws are of great concern.

Get over it America. We created this moment. Now we have to chose: More of the same (decline) from a candidate who’s ‘never wrong’ whose purpose is about herself and her sex. Or, an extremely flawed man (extended from our celebrity culture) who, at least wants to apply conservative principles to government in order to attempt to improve our lives.

Neither may prove to be effective. But, at least we have a chance with Trump. I’m willing to risk it!