Bryan Crabtree
|
Posted: Sep 11, 2016 12:01 AM
Share   Tweet
The opinions expressed by columnists are their own and do not necessarily represent the views of Townhall.com. 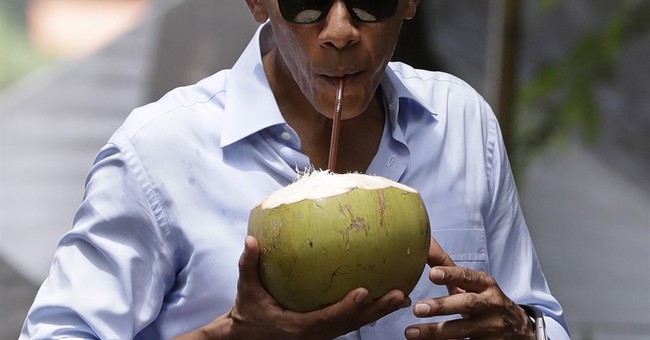 In a recent trip to Laos, President Obama trashed the United States a total of eighteen times. He accused us of being lazy, ignorant, bashed the Republican nominee for president and apologized for our bad military decisions. He painted a picture of how we racially discriminate, mistreat women and have dropped bombs killing innocent people.

I have just one question for the President: Since we are so awful, why don’t you move when you leave office?

Obama will never apologize to the American people for all the damage he’s caused. So, I will.

I'm sorry to the 12 million Americans who given up on finding a job. I apologize to our veterans who been brought home from war but not given the care they deserve - including the 1 million facing post-traumatic stress disorder. I'm sorry to the one-in-six men of working age who are no longer in the labor force (and can’t find jobs).

While Obama has been focused on improving his reputation around the world, we’ve been punished as a result.

For the past month, I’ve been apologizing to my audience on my Atlanta radio show for the collateral-damage caused by the ignorance and arrogance of this president.

No American president has ever presided over eight years of ‘below three percent’ annual, economic growth. Could he apologize for that?

In the last eight years we’ve been choked by Obama care, common core, executive amnesty, Dodd Frank, ISIS, transgender bathrooms, a war on cops, the Hillary Clinton email scandal and much more. The bureaucracy and red tape of all of these government-driven failures has created a compliance-minded society designed by lawyers and benefiting only the rich and deviant (who can manipulate people/businesses with limited resources).

After each domestic attack by a radical, Islamic-terrorists, this president has preached to us, not about the threats we face, but about peaceful-Islam as a religion. Never before has an American president been so arrogant to apologize to the world for our behavior while preaching to the people as if we were ignorant, ‘know-nothing’ children. He actually called some of our citizens ‘know-nothings’ this past week.

I would like to apologize, unofficially, to the black community. What seemed to be ‘hope and change’ for a positive future - and upward mobility - has brought more poverty, welfare and entitlements. Young, black men are nearly fifty-percent unemployed.

To the small businesses in America you deserve one of the biggest apologies. Due to the Dodd- Frank bill’s guidelines, businesses struggle to get funding, open simple bank accounts and even hire employees. Just this week, we learned that Wells Fargo was fined $185 million for opening illegal bank accounts and credit cards. It seems that nothing has changed except for the ‘little guy.’

We’re mired in fighting a financial crisis which ended years ago. Dodd Frank has choked the job creation our country at Obamacare is killing health care.

We never advised this president to apologize to the rest of the world, bow to foreign leaders, weaken our military and put America on the sidelines. He did it because that was his agenda from the beginning.

He believes we are fundamentally flawed and that capitalism is inferior to socialism. He has maintained a policy of importing poverty through an unfettered immigration program and allowed our society to take a path toward civil unrest through supporting militant groups seeking mischief not justice.

Historically, we have been the leadership and the glue that creates a more stable world. In just eight years, this president has erased decades of hard work.

If we choose Hillary Clinton, the result will be a country that loses its potential. In fairness, there is no steep ‘cliff’ at the end of this election. This is a very strong country and continued policies such as the Obama-Clinton era will only create a slow demise such as a gentle slope on the backside of a mountain.

A better analogy might be the frog in the boiling part of water. At first, it's just warm and cozy, but before you know it the frog is dead because the water boiled the frog.

With Donald Trump, we have a chance. If he can reduce choking-regulation, fight for policies that keep our jobs from being exported and restore a sense of law-and-order, we have a fighting chance.

Absent the latter, this country will owe our children and grandchildren the ultimate apology tour for destroying the greatness that we inherited.

Obama: You should be apologizing to us - not to the world. He won’t, so I will.