Bryan Crabtree
|
Posted: Aug 13, 2016 12:01 AM
Share   Tweet
The opinions expressed by columnists are their own and do not necessarily represent the views of Townhall.com. 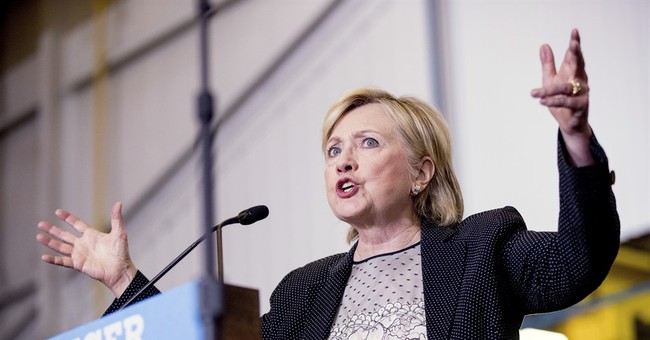 When Hillary Clinton isn't outright telling a lie or experiencing a ‘short-circuit in the brain,’ she's  setting fire to the truth. In other words, she has a way of telling you facts that make harsh-reality look really good.

This past week, Hillary Clinton gave an economic and jobs-speech in Michigan. She said, “In Detroit, we’ve got new businesses opening… Towns like Eastern Market are coming back. The auto industry just had it’s best year ever.”

On the surface, these assertions are true. But describing upper Michigan in such a giddy way insults the struggles of many people - many who've been laid off by the car industry. It's like saying Ford just hired 2,800 people for its new car plant without bothering to explain that the plant (and the jobs) are in Mexico. This sort of half-truth is worse than telling a bold lie.

To make matters worse, Hillary mentioned how great the auto industry did in 2015. That is incredibly disingenuous. Car dealers (sales) in America had the best year of sales in history. Car manufacturing, on the other hand, is still in decline even in this record sales year. Since 1999, the trend line shows an average of roughly two percent fewer cars being made in America each year as compared to the year prior. In this so-called record sales year (2015), only 4.2 million cars were actually made in the United States.

That means less than 25 percent of the cars we purchased were manufactured in the United States. At this pace of decline, we’ll only manufacturer just over 3.5 million cars in the United States by the year 2025. That's okay, Hillary, you keep being positive (and delusional) while the rest of us watch our country fall apart. I’m sure your supporters will keep buying your rich distortions of the actual truth.

There's no way to talk about the automobile industry in America, remain positive and be honest at the same time. It's a disaster. Because of our trade deals, regulation and government’s abject stupidity American workers are suffering. In total, all U.S. businesses are overwhelmed by the staggering cost of regulations: $2 trillion per year.

At the midyear speech to the National Association of Homebuilders (NAHB), Donald Trump quoted NAHB research that shows the cost of a home is 25 percent regulation costs baked into the process. The average cost of a new home in our country is approximately $130 per square foot. That means your new home costs $32.50 per square foot in government regulation.

As devastating as the auto stat is to me, the regulation costs on homebuilding is maddening. I'm in the process of building a home now and have just spent two months going from contractor to contractor dealing with the sticker shock of the rising cost of materials and overall pricing. It's roughly 25 to 30 percent higher than it was in 2012-2013. Much of this is the result of liberal policy not limited to Dodd-Frank regulations.

I've labeled Hillary Clinton a ‘truth arsonist’ because when she's not lying she's burning the truth out of the facts to paint a rosy picture while accusing others of being too negative. This extends from her arrogance and in knowing the media will not factcheck her delusional assertions. Also, the average voter is too ignorant on economic and financial issues to know the difference (or too busy to notice). This leaves intelligent business-minded people, who painstakingly try to explain these realities to those voters, actually looking radical and negative.

The first step to fixing a problem and avoiding greater pain is to identify the problem. For the last several years, the Obama administration has been telling us “we've created jobs for the last 72 (or “xx’) straight months.” Leftists frequently remind me of this fact in the comments threads of these articles and on my social media pages.

What they fail to address is that, while there have been roughly 9.5 million jobs created since Pres. Obama took office, our population has grown by almost 17 million people. The most important indicator of a president's performance would be labor participation rate. It was the late 1970s when our labor participation rate was as low as it is now: 62.7 percent. That means almost 100 million Americans do not have a job. It’s as bad as during Jimmy Carter’s presidency and getting worse.

I'm tired of the truth being set on fire by crooked politicians from both political parties who think we're too stupid to see what's actually happening in our country. People are struggling. Upward mobility is weakening. Income growth is stagnant due to overwhelming labor and environmental regulations. Healthcare costs are skyrocketing thus choking employer's abilities to reward their employees with pay raises and bonuses. Our national debt is out of control. Our technology, roadways and airports are antiquated.

Yet, we still present the most opportunity of any country in the world. Our potential is still endless. Without a course correction, our future is bleak. It’s time to stop avoiding our problems and address them. It’s going to get painful; but we’ll avoid much greater pain if we do it now.

Hillary and Obama Can call us realists ‘cynics’ all they want. I refuse to buy some bubble-headed, capricious and deceitful distortion of the facts lying down while this great nation marches toward failure.

If that's too negative to handle, then take some sort of a pill and get over it Hillary!