An Idea to Make Colleges Functional

Bruce Bialosky
|
Posted: Dec 09, 2018 12:01 AM
Share   Tweet
The opinions expressed by columnists are their own and do not necessarily represent the views of Townhall.com. 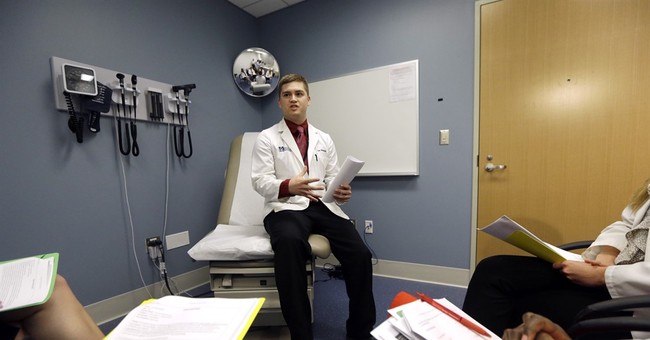 The United States spends an ungodly sum on colleges and universities. A lot of that money provides little to no benefit to the consumer (student) or to our society.  Many students end their college careers steeped in debt. Yet we have a shortage of people in many critical areas.  Here is an idea to solve that.

Colleges today offer degrees to people that provide them little opportunity for supporting themselves for the rest of their lives.  The idea of a liberal arts education used to make a certain amount of sense.  When the cost became enormous with the resulting disaster for the student’s finances, some decisions must be made as to whether there is rationale for this.

At the same time, we do not have enough students to meet our needs in STEM (Science, Technology, Engineering and Math).

The proposal is that colleges and universities provide no-tuition degrees that are critical for our country.  Reading this some may think this idea aligns with the Bernie Sanders set, but it is radically different.  The idea limits no-tuition education to certain degrees like doctors, scientists and engineers which are critical to our future as we are not producing enough home-grown talent and the no tuition degrees would be limited to American citizens. Under this plan, getting a degree in English literature, journalism or law is on your dime.

I have written previously that it is bothersome that our tech companies are always arguing for more visas to bring in foreigners with engineering degrees.  Yet few ask why America is not producing enough individuals to get those degrees when there are lucrative careers available.

The National Association of Manufacturing and Deloitte predict the U.S. will need to fill about 3.5 million jobs by 2025; two million of those jobs may go unfilled, due to difficulty finding people with the skills in demand.  Though more students in K-12 are focusing on courses like calculus that are needed to qualify for entering these programs in college.  Yet a 2017 report from the National Foundation for American Policy found 81 percent of full-time graduate students in electrical and petroleum engineering programs at U.S. universities are international students, and 79 percent in computer science are also foreigners.

Or what about one of the most important positions in our society – doctors.   The Association of American Medical Colleges is projecting a shortfall of between 34,600 and 88,000 doctors by 2025.   A large reason is the financial commitment it takes to become a doctor.  If you are a top tier brain where would you go -- to a hedge fund where you can start at up to $300,000 per year or a doctor where you start your career with up to $300,000 in debt?

This is not a farfetched idea as New York University (NYU) has committed to covering the education costs for its medical students.  This is with special funding, but almost all private schools have the endowments to cover the cost of the students at their medical schools.  Public schools could just allocate the funds.  Here is an idea:  Raise the tuition at their law schools which seem to be in high demand, and there is an extremely low need for additional lawyers in our country.

We already fund the education of a certain class of people – our military leaders.  We do this because we want to attract the best and the brightest to lead our military.   Each branch has an academy that provides a rigorous education to students.  We already know the success rates as we have a long history of knowing how many drop out.  If we charged for the real cost of West Point or Annapolis, how many great leaders would we lose? Better yet, how many would we get?

Why America would waste our national resources on funding degrees like Asian Studies, Jewish Studies, Black Studies or Hispanic Studies is beyond me.   Degrees like that are superfluous and provide you an opportunity to get a job in the department at the university that minted that pointless degree and not much else other than being a bartender.  If you want another one of these degrees or in the so-called social sciences where, when you can’t get a job anywhere else you become an IRS auditor, you can pay the tariff.  A lot of these degrees are just a plain waste of national resources.

Just think if you were a poor kid from a first generation Hispanic family and your elementary school and your middle school educated you on the opportunity that you can work hard, take the right courses, and by the time you get to high school you are totally prepared and focused on getting a medical degree and without any affirmative action, you become an MD.  Would that change things!

There are some programs that are already aimed toward this.  Chevron has funded $400 million toward orienting students at a young age toward STEM degrees.  The STEM Coalition is a non-profit that emphasizes getting support for more students focusing on a STEM education.

Our higher education system developed on its own for centuries.  It is the marvel of the world as countries send their best students to our country to get the quality education we provide at hundreds of schools.  It just is not educating American students for our needs.

The world has changed.  Our students have accumulated over a trillion dollars in debt and we are not even producing enough skilled people to take care of the needs of our country.  The program needs a revamp and this is a prime idea to start doing that.

We need more doctors and not more students with degrees in sports management where the only job they will ever get in sports is working the counter at a Footlocker.  We need to stop wasting these key resources on nonsense and produce viable college graduates. Let’s fund the ones that are necessary to us as a society.