When Did They Become So Angry?

Bruce Bialosky
|
Posted: Oct 07, 2018 12:01 AM
Share   Tweet
The opinions expressed by columnists are their own and do not necessarily represent the views of Townhall.com. 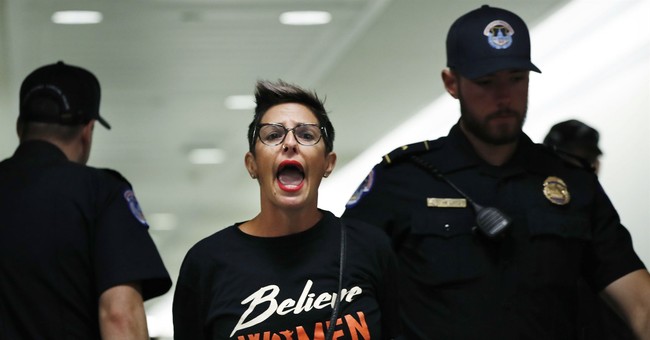 It was not always this way. In the ‘60’s, they were so high that they seemed so pleasant.  They used to go to Peter, Paul and Mary concerts and sing with joy of what our country was to be and what it had become.  Where did those people go?

Currently, it seems like they are constantly marching and screaming.  If you saw a picture of the women stomping around the halls of the Senate office building during the Kavanaugh hearings, you would think their children had just been stolen from them.  What vitriol.  What happened to “you can catch more flies with honey than you do vinegar”?

The Left used to have happy warriors.  People like Hubert H. Humphrey who, though he lost the presidency, maintained respect amongst all Americans with a cordial attitude toward his political opponents.

Senator Kamala Harris (D-CA) seems to be the model for most asking questions with a nasty attitude and contemptuous glare. Senator Amy Klobuchar (D-MN) appears to be an exception to the crowd.  Like Humphrey she comes off as “Minnesota nice.”  Maybe she could spread it around.

Might it be that they are taught this in their advanced education studies?  So many study courses where their professors are angry with America.  It makes one think of the song from South Pacific: You’ve Got to Be Taught How to Hate.

Maybe it started when Nixon addressed the Silent Majority.  The average American who wanted to do what Americans have wanted for a long time: raise their kids, feed their families and respect their country.

Maybe it was after two generations when Republicans finally won the House of Representatives thus initiating a change in the country.  Was this so much an acceptance of Republican values or a rejection of Democrats lurching too far to the Left?  A loss of focus on what Americans want – small, but effective government.

Maybe it was that Republicans started to voice their own opinions.   Voices like William F. Buckley came along and said it was polite to be a Conservative.

Sure, there were inequities; there always will be.  America is the only place where every-day poor folk can still rise to the highest office in the land.  Truman, Johnson, Nixon, Carter, Reagan, Clinton, Obama.

How do you criticize a country where a higher percentage of legal immigrants own their own homes than native born Americans?  That includes, Blacks, Hispanics, Asians; and, yes, Whites.

Then along came Talk Radio and Fox News and it drove them nuts.   Some angry heads on the Right.   Your anger grew; why did they have their own news sources and thought leaders?  You became angry that you did not have 100% of the news media; 95% was not good enough --including government-supported sources (PBS and NPR).

We all receive the emails.  They are out at another march or another sit-in or a vigil.  Where do they find the time?  We are too busy working or raising our children and grandchildren.

If they are all so happy, why aren’t you?

We don’t want you so angry; we want you happy.  We want you experiencing the joy of being an American.

Go to a concert -- be it The Killers, Beyoncé, Taylor Swift, Toby Keith or Bruno Mars.  Or go see The Boss.  For four hours have the joy of unadulterated Rock ‘n’ Roll which will save your soul.   Better yet, go see Earth, Wind and Fire.   It is chemically impossible to leave an EWF concert without a smile on your face.  Smoke a doobie.  It is mostly legal now.  Loosen up.   We will be fine.  This is the greatest country this planet has ever known.   More people have achieved more economic security than anywhere in the world.

That is why people are climbing over each other to live here.   They are not in Japan or China or France or Russia or most anywhere.  They want to come to America from every corner of the globe to live like we live.

We will be better tomorrow.  Please lose the anger and come back to us.  We need you back.  We want you back.  You are our brothers and sisters.  Let’s talk.