FBI, You Don’t Have That Right

Bruce Bialosky
|
Posted: Jul 22, 2018 12:01 AM
Share   Tweet
The opinions expressed by columnists are their own and do not necessarily represent the views of Townhall.com. 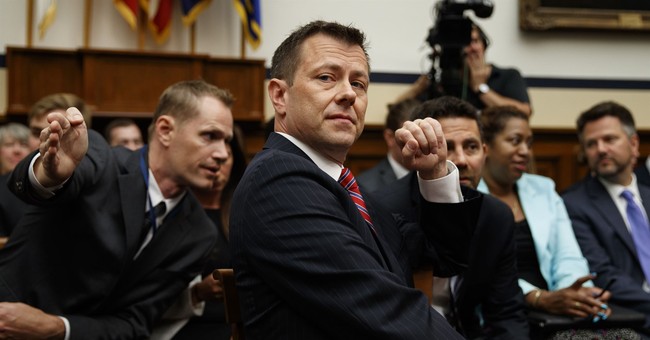 We have seen the theater of Peter Strzok defiantly defending his actions while working for the FBI during the 2016 election cycle and in the aftermath with the investigations.  Once again, a “right” was established that the FBI does not have and one that harms our country by the continuing false affirmation.

The right asserted as supposedly told to him by an FBI attorney is that he could not comment on an ongoing investigation.  This is one of the two rights the FBI throws around when they do not want to comment on the work that Congress is reviewing as part of its oversight authority.  The other right the FBI likes to conjure up is that select testimony cannot be provided because of national security concerns.  Congress should decide whether any of these items are relevant to those two areas, not the Bureau.

Ted Lieu (D-CA) stated while questioning Strzok during hearings that the Republicans could not show that there was any bias demonstrated by Strzok in his official capacity during the investigations.  How could we know and how could Congress know when both Strzok and FBI Director Christopher Wray stonewalled us about the investigation or providing documents from the FBI?

The IG report stated they did not find evidence of bias in “decision making”; considering the massive amount of biased texts and the identification by the IG of bias, there is a serious question of whether there was bias in the decision making by Strzok.  We may never know because no one outside the FBI or Justice Department will ever evaluate the information because it is part of a “continuing investigation” that may last until the next century or until America has long forgotten this issue.

Neither of these rights exist.  They never have.  Congress oversees this bureau and has the actual right to demand documents and answers to questions regarding the activities of the FBI.  It is Congress that makes the decision whether to release information on an ongoing investigation or whether the materials are an issue of national security.  The FBI can certainly advise them of any concerns, but Congress has the ultimate decision.

If you watched the testimony, particularly in the beginning when Trey Gowdy (R-SC) queried Strzok, he invoked this imaginary privilege. The answers Gowdy was seeking would not have given away any information that would have jeopardized the investigation.  They were about the timeline of Strzok’s work compared to his inflammatory texts.   Gowdy did not ask anything about witnesses’ names, places or the information they provided.  Strzok used this bogus protection to avoid answering relevant questions from a smart prosecutor.

If the bureau was successful in asserting this right then all the executive branch departments, agencies and bureaus -- that have been multiplying like rabid rabbits -- would be able to state they are unable to answer congressional inquiries for their own homegrown rationale.  For example, the Department of Health and Human Services could proclaim that they did not have to answer congressional inquiries because of national health concerns and releasing the information would cause a national health hysteria.  Or the EPA could advance that releasing information would advance a national environmental panic.

The principal matter here is the ever-expanding secrecy of our federal government.  Our elected officials and worse, our public employees, think we are children and they cannot tell us anything.  Too many secrets are kept from us and for too long.  That is why our government is still withholding information about the Kennedy Assassination now 55 years later.  We can handle the truth so start telling us.  Actually, by withholding information you create more dissension as the press, as currently constituted, spends far too much time wildly speculating as opposed to reporting information.   The release of information would tamp that down.

Of course, Congress is partially at fault for creating and perpetuating the problem.  They can hold the offenders in contempt.  In fact, when Strzok refused to answer some questions, Chairman Bob Goodlatte (R-VA) stated he was going to do so to Strzok.  We have to see if he will follow through with the threat.  Congress did hold Eric Holder in contempt in 2012.  He was held to be civilly and criminally liable for not turning over documents regarding the investigation of Fast and Furious, the gun-running scheme of the Obama administration.   The problem is that Congress does not follow up with enforcing their powers.

If Congress actually sent U.S. marshals and arrested Strzok he might change his tune.  If they also arrested the attorney invoking the supposed right along with Strzok maybe they would start singing.  There is an actual law that provides for a penalty of up to a year in prison if convicted of being held in contempt of Congress.   If you act like a paper tiger, then people will not fear or respect you.

Congress does not have a significant level of respect in the country and has not for awhile.  The reasons are many, varied and have evolved, but one that continues is that they are perceived as an overpaid, pampered group of wimps unwilling to make tough decisions.

Issuing a warrant for the arrest of Strzok to uphold their right to obtain information as an oversight body responsible under our Constitution to protect the interest of American citizens as our duly-elected representatives would be a nice beginning.  Grow a backbone.